Film Review of Stand Up and Cheer: Shirley Temple in Breakthrough Role in 1934 Musical

In the 1934 film version of "Stand Up and Cheer!" a character played by Shirley Temple ends the Great Depression.

A U.S. President believes that people do poorly if they feel poorly.

He launches the one and only Department of Amusement. Will Broadway standards, hillbilly performers, and red polka dots jump-start an entire country in “Stand Up and Cheer”?

Grauman's Chinese Theatre (now TCL Chinese Theatre): prints of Shirley's hands and feet were made in March 1935, less than one year after release of her breakthrough film, "Stand Up and Cheer!"

John has reason to worry. Lawrence is blessed with humor-committed employees:

He is fortunate in:

He mistakenly thinks that the children’s division needs to close.

The movie ends with Lawrence and Mary:

Shirley Temple Baby Take A Bow From Stand Up And Cheer! 1934

Published on YouTube on Sept. 8, 2015, by Shirley Temple ~ URL: https://www.youtube.com/watch?v=cFJWmqMzvJU

Shirley Temple - Stand Up and Cheer ~ Clips of film where Shirley appears.

Uploaded to YouTube on December 26, 2009 by Angelina Bardelli ~ URL: http://www.youtube.com/watch?v=QVJv4K-niTo 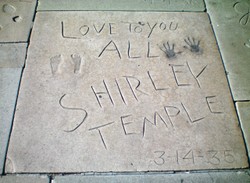