In the 1936 film version of "Stowaway," Alice Faye, Shirley Temple and Robert Young sing from Shanghai to Reno.

Guardians do not care about a Chinese orphan’s safety during uprisings.

She gets robbed and stranded by guardian #2. Will a bilingual waif find three a lucky or unlucky charm when she meets an engaged beauty and an eligible bachelor in “Stowaway”?

Tommy carouses with Colonel (Eugene Pallette). Ching-Ching chases Mr. Woo, who chases a cat. Ching-Ching sleeps in the trunk while Tommy drives the ship on board.

She wires Richard to advance meeting his childhood sweetheart.

Richard and Ruth are against adoption. Susan dumps Richard. Susan and Tommy get married in name only.

"Stowaway" was released in time for Christmas: the film ended with Shirley singing "That's What I Want for Christmas"

Uploaded May 11, 2018, by Classic Film Channel to YouTube ~ URL: https://www.youtube.com/watch?v=7oQyOwsHOXw

When Ching-Ching's (Shirley Temple) missionary guardians are killed by Chines bandits, she must fend for herself on the streets of Shanghai. 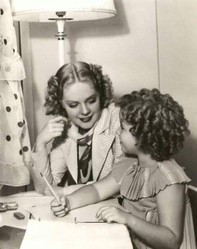 Diaries and divorce impact characters played by David Niven and Shirley Temple in the 1949 film version of "A Kiss for Corliss."
81%  8   8 DerdriuMarriner
Comedy