Film Review of The Bachelor and The Bobby-Soxer: Shirley Temple in 1947 Comedy With Cary Grant

In "The Bachelor and the Bobby-Soxer," a basketball player loves an orphan, an orphan loves a playboy, and the playboy loves a judge.

A teenager develops a crush on an older man. Her ex-boyfriend ends up becoming best friends with the playboy.

Who will end up with whom when the playboy and the orphan’s older sister start liking each other in “The Bachelor and the Bobby-Soxer”?

A retrospective showing of only comedy in which Cary Grant and Shirley Temple co-starred.

The 95-minute film was distributed by RKO Radio Pictures. It was NYC-premiered and USA-released on July 24 and September 1, 1947. It won the 20th Academy Awards' Best Original Screenplay on March 20, 1948.

Dickie guest-lectures at Sunset High School. Susan introduces herself as:

Dickie, son of a flag decorator and piano teacher who married three days after meeting, invents:

Races are held. Tommy wins all but one. Dickie wins the obstacle race through Jerry's and Susan's sabotage and $4.50 in $0.75-cent bribes.

Dickie accepts Margaret's invitation to the Tick Tock Club. Dancing and dining are darkened by accusations of:

Matt gets Jerry and Susan reconciled even though reconciliation endangers his queen with chess-playing brother/Judge Thaddeus (Harry Davenport).

The movie ends with Matt:

Uploaded to YouTube on February 6, 2007 by Daniel Paikov ~ URL: http://www.youtube.com/watch?v=CBmeOzSzKoY

Daniel Paikov. "The Bachelor and the Bobby-Soxer." YouTube, Feb. 6, 2007, @ https://www.youtube.com/watch?v=CBmeOzSzKoY

Shirley Temple in dressing room doorway, "The Bachelor and the Bobby Soxer"

The Bachelor And The Bobby-Soxer, Cary Grant, Shirley Temple, 1947

Abby, That "You remind me of a man" routine has been one of my favorites since childhood. "The Bachelor and the Bobby-Soxer" is filled with comedic charm and energy.
Me, too: I just love Shirley Temple, too.

This is one of my favorites too. I just love Shirley temple I guess lol 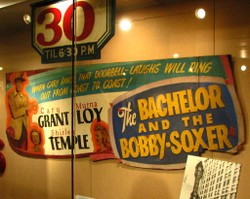 The Bachelor and the Bobby Soxer
63%  3   8 DerdriuMarriner
Romance

Characters played by John Agar, Shirley Temple, and Robert Young cause art, God, and suffragism to mingle in Charm City in the 1948 film version of "Adventure in Baltimore."
67%  2   9 DerdriuMarriner
Westerns