Film Review of The Blue Bird: Shirley Temple in a Fantasy Film About the Blue Bird of Happiness

In "The Blue Bird," Shirley Temple's character travels to and from dreamland in the 1940 film version of Maurice Maeterlinck's beloved fairy play.

The fantasy film "The Blue Bird" is based on the namesake play by Belgian writer Maurice Maeterlinck, who was awarded the Nobel Prize in Literature in 1911, three years after publication, in 1908, of his popular play.

In "The Blue Bird," a little girl abhors the poverty of a woodcutter’s existence in eighteenth-century Germany. She resists sharing a rare bird since others do not share their Christmas spirit or wealth. How will she feel after questing “The Blue Bird” of Happiness?

The 88–minute fantasy adapts Maurice Maeterlinck’s (1862-1949) 1908-presented play L’Oiseau Bleu. Its distributor was 20th Century-Fox. Its Boston/NYC/San Francisco-roadshow and USA-release dates were January 15 and 19, 1940. It was Oscar-nominated for Best:

The siblings awaken their grandparents in the Land of the Past. Granny (Cecilia Loftus) not:

The first side road accesses the Land of Mr. (Nigel Bruce) and Mrs. (Laura Hope Crew) Luxury. The siblings dispute who gets which gifted pony. Tylette makes the siblings the object of a raging conspiracy of:

She perishes in storms and wildfires.

The movie ends with the siblings:

Published on YouTube on March 4, 2015, by Shirley Temple ~ URL: https://www.youtube.com/watch?v=cDxdGBiHn4g 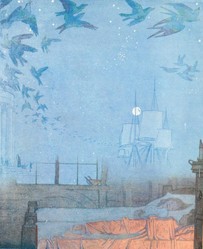