Film Review of The Little Princess: Shirley Temple in Drama With Cesar Romero and Arthur Treacher

A charming eight-year-old shows love for her doll, her father, her horse, her instructors, and her queen in the 1939 film version of "The Little Princess."

A widower moves his only child from their happy home in India to privileged schooling in England. He trusts in her safe happiness while he goes into battle. Exactly how high or low will be war’s tolls and peace’s joys in “The Little Princess”?

Reginald and Sara arrange to remember each other at 2 p.m. on birthday #8. Solicitor Barrows (E.E. Clive) interrupts festivities to reveal Reginald’s:

Geoffrey enlists. Amanda fires Rose, whom she raised as a foundling and who wears husband Geoffrey’s ring on a necklace. Amanda’s brother/elocution professor Hubert (Arthur Treacher) joins the war effort after cavorting through “Knocked ‘em in the Old Kent Road” with Sara.

From across the way, Ram Dass (Cesar Romero) chats in Hindustani with Sara. He gives Becky and Sara blankets, robes, slippers, and tablecloths. Sara remembers Ram’s breakfast muffins and tea when Lavinia (Marcia Mae Jones) taunts her with chocolate. She upends ashes on Lavinia’s pink shawl.

No one can enter for one hour. Sara gets into the room of the royal visit. Wheelchair-bound Queen Victoria (Beryl Mercer) hears Sara’s plight. She lets Sara search the hospital. Sara sees Geoffrey, whose war-wounded right arm is bandaged.

Published on YouTube on March 11, 2010 by aiken1 ~ URL: https://www.youtube.com/watch?v=zSwPRNXhQtk

screenshot of Shirley Temple as Sara in "The Little Princess": Public Domain, via Wikimedia Commons @ https://commons.wikimedia.org/wiki/File:Little_Princess_4.JPG

Mira, I'm glad that you're appreciating Shirley's films. Me, too, I also found "Honeymoon" to be fun.

How funny that the solution was such an easy one. :) When clueless about a character, copy-paste it from somewhere :):)
I noticed you set about canvassing Shirley Temple movies. I'm so happy you're doing that as I first heard about her as a child and yet didn't remember watching any movies with her past my adolescence years. I'm glad I can watch them now. The Honeymoon one was a lot of fun, quite a good comedy. I cannot wait to watch the others you wrote about.

Mira, Thank you for noticing that I've reached 100 articles! I'm so pleased that an article on Shirley Temple clinched that benchmark for me. :-)
Actually, I didn't type in the stars. They are in the YouTube title, which I copy-pasted onto the YouTube module here. I'm glad that the stars were retained in the copy-pasting.

Congrats on reaching 100 articles, Derdriu! I can't wait to watch this movie, too. Like those stars in the title of the YouTube video (around "Free Full Movies"). How did you type them?:) 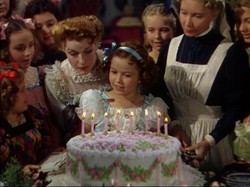