Film Review of That Hagen Girl: Shirley Temple in 1947 Drama With Ronald Reagan

"That Hagen Girl" shows what hateful gossip does and does not do to characters played by Shirley Temple and Ronald Reagan.

Gossip aims to hurt, not to clarify.

It can have a long shelf-life since its practitioners skulk behind their subjects’ backs. What will happen when those most hurt by hateful rumors join ranks in “That Hagen Girl”? In 1981, thirty-seven years after the release of "That Hagen Girl," Shirley Temple worked again with Ronald Reagan.

During the Reagan presidency, Shirley served as Foreign Affairs Officer-Expert with the Department of State (Foreign Service Institute).

That Hagen Girl was the third of three Shirley Temple films released in 1947.

Two decades later, Tom is back in Jordan, Ohio. His guardian is dead. He meets Professor Julia Kane (Lois Maxwell) at a college dance.

Minta dies without naming Mary’s biological parents. Mary initially disbelieves Tom’s insistence upon not being her father. Tom invites Mary on afternoon outings with him and Julia. He offers to fund Mary’s university education elsewhere. He receives the Order of Merit for wartime service in Washington, D.C. He returns to:

The movie ends with Tom: 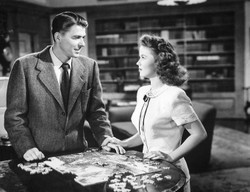 Diaries and divorce impact characters played by David Niven and Shirley Temple in the 1949 film version of "A Kiss for Corliss."
63%  3   8 DerdriuMarriner
Romance