The first World War was called The Great War before the beginning of the second World War. It is hard to imagine what they went through, but some films help us understand.

World War One was a long war. It was a brutal war. Men fought and died in the trenches. They could hear the cries of the enemy as they died. The enemy could hear their cries.
In many cases, they were close enough to talk to each other, and taunt each other. The United States didn't enter the war until 1917, years after the war began. My own grandmother's brothers served in the navy during WW 1, and were lucky enough to make it home. If you are interested in knowing more, some of the films can help give you a feel for what the war was like for those who fought it.

This movie is based on a true story. The Lost Battalion is a story about the final months of WWI. The men of the 308th Battalion, 77th Division, led by young Major Charles Whittlesey (played by Rick Schroder), were assigned to capture a stronghold in Charlvaux in the Argonne campain. Whittlesey and his men were cut off from allied forces and were being hit by friendly fire (their own men). Inspite of this, the men of the 308th hold fast, despite suffering heavy losses. In the meantime, high ranking officers prepare to write the men off as expendable. It was filmed on location in Luxembourg, and is fairly graphic.

John Chatterton dives on two wrecks in the North Sea. He meets up with historians, and other divers, and together they try to piece together the clues left by these long lost ghosts of WWI. Also included in the team of Maritime sleuths are British naval experts.

See actual footage of the bottom of the North Seas. Along with finding answers to their questions, they end up creating more questions.

I checked the reviews of all these movies, and they all get very good reviews.

True Story of Veterans Day DVD (History Channel), is a historical look at Veterans day, and not it came to be, and who it was meant to honor. Interviews, along with archival material illustrate the holiday from it's founding, as Armistice Day, until it was formally changed to Veterans Day, in 1954. Veterans should never be forgotten, and this look at Veterans Day shows us why.

This movie is bases on a real event that occurred on Christmas Eve, 1914, when the war stopped. Men who had been trying to kill each other just moments before, suddenly there was a musical call, then a response.

What happened next was absolutely amazing. Each side set down their weapons, walked out on the battle field between their trenches, and exchanged handshakes, gifts, and for a brief time forgot the war. Of course the truce did not last. When Christmas ended, so did the truce, and killing began again. This is not a story line that a screen writer invented. It is based on a real event, when a war stopped, just because the men on both sides wanted it to. (This WWI DVD has received very good reviews from those people who have purchased it.)

Join Me On Wizzley

Ever think about making money at home? Well, you can by making pages just like this one on Wizzley. I make money here, and so can you.

Also, if you are new to making money online, check out my article (below) called, "Work at Home, Make Money From Home.

Work at Home, Make Money From Home
Making money from home is a dream that many people have. I'm here to tell you it's not a dream. I make money from home, and you can too.
Updated: 11/26/2013, pawpaw
Thank you! Would you like to post a comment now?
1

A small group of brave men stood against a vastly superior force. 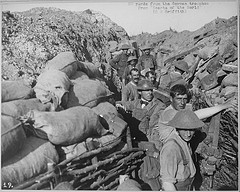 Puck Magazine, Very Collectible For a Number of Reasonson 05/06/2013
Ad

During WWI, from the years 1914, to 1918 when the war ended, millions of letters were written. Those letters are now very collectible.
53%  4   6 Glen
Military History