During WWI, from the years 1914, to 1918 when the war ended, millions of letters were written. Those letters are now very collectible.

I collect military correspondence, and much of my collection is from WWI. There are many reasons that a person might collect letters from WWI.

As well as information about collecting WW1 correspondence, you will also find letters for sale, from individual letters, to large lots.

What is the Value of World War 1 Letters?

When I tell people that I collect WWI letters, usually the first question they ask is....How much are they worth?

That is a difficult question to answer. There are so many things that have to be considered when trying to determine the value of a WWI letter. Here are just a few things than can affect the value.

Was the writer famous? If the writer is someone who later became famous the value could very very high.

What kind of duty did he serve. If he was an aviator, his letters could be very valuable, but if he worked in saniation in a U.S. camp, and never saw France, the value wouldn't be very high.

Content....Does the letter have good content, such as mention of certain battles, death of a friend, being wounded, or anything specific, the value goes up. *Note* Letters were censored during the war, so good content is hard to find.

Condition....Letters from World War One, are now almost 100 years old, so some have been taken care of over the years, and some have not.

Letterheads....Does the letter have an unusual letterhead? If so, the value goes up.

Overall rarity.....If this letter is rare for any reason, the value goes up.

A Few Example of WWI Letterheads

Do you own any WWI Letters?

Where can you buy World War 1 Letters?

Sometimes you might get lucky, and find a few at an estate sale, or even a garage sale, but the vast majority of letters are sold through online auctions.

Of course the biggest of those is Ebay.

I have seen individual letters sell from $.01, to well over $100.00. Why would a person start the bidding on a letter at $.01? Because it many times gets some bidding activity going, and once several people get involved in the bidding, sometimes a bidding war developes. But if you are the only person who bids on an auction that starts at 1 penny, you get the item for that price.

If I had to give a price of the average WWI letter on on Ebay, I would say somewhere between 3 and 8 dollars, but like I mentioned above, there are many things that affect the price. So if you decide to give it a try, stay out of bidding wars, and have fun. It is a great hobby.

These are just a few.

WW 1 Letters For Sale in Lots

As well as individual letters, you can also find World War One letters in lots. Lots can come in small groups, or groups of letters than come in amounts that number in the hundreds.

One advantage to buying lots, is that the price per letter is usually lower than if you buy them individually.

Another great thing about buying a whole group of letters in a lot, is that you can many times follow a single soldier or sailor's story. You can read from the beginning, when they are in training, through their time overseas, and then back again. When you get a chance to read a group of letters like that, it will often seem like you actually know the person, when you are done reading all of them.

Although letters were the most common thing used by soldiers to write home, they also occasionally used postcards.

Postcards were often used when the soldier had little time, or was on leave, and wanted to show the folks back home where they had been. Holidays were also a popular time for postcards to be used.

Many postcards were meant to be souvenir to send back home to family or friends. Some were even made of silk, and were very ornate in come cases.

The War Started Long Before the United States Entered WWI

American collectors shouldn't neglect the years prior to when the U.S. joined our allies. As with WWII, the United States was a latecomer to the war. The war was going strong for several years before we joined in.

If you are looking for letters in English only, there are still some amazing letters written by our friends to the north, Canada, and also the U.K., and Australia. All of them entered the war in 1914, whereas the United States didn't get involved till, 1917.

Looking at the War From the German Perspective

To get a full view of WWI, and those who fought it, it is important to look at the war from both sides. One way to do that, is with WWI German Fieldpost Letters.

Of course, to fully benefit from owning them, you must be able to read German, or know someone who does. I took German for a short while in High School, but not enough to help much. Even so, I still own a few myself.

Do You Collect WWII Letters

Collecting WWII Letters, and WWII Letters For Sale
WWII was a very important part of the history of our planet. The people who had to save the world were ordinary people like you and me. Their letters tell the stories.

US Army Doctor WWI Letter from France June 1918
This letter was written by a US Doctor from France, during WWI, June 28, 1918. This letter is one of two that were in the same envelope. The cover has a British censor...

365th Infantry African American WWI Letter Nov. 12th 1918 About Armistice
This letter was written by an African American soldier, who was with the 365th Infantry Division. He was in France at the time he wrote the letter (the day after...
Updated: 12/12/2014, pawpaw
Thank you! Would you like to post a comment now?
8

i collect letters and photograph albums of the great war just purchased about 200 letters from an officer in the Norfolk`s served in Mesopotamia came from Norwich a fascinating insight!

Most people sell letters in online auctions. I think I would set a reserve, if you don't have much experience at it. Good luck.

I was wondering how to sell my collection of ww1 letters, which follow an officer from the troop transport he was on to the end of the war. There are about 30 letters in all, all in great condition, most with envelopes and markings from Paris, where he was stationed. He is writing to his wife in Mass.
One brother is injured in a gas attack, also includes descriptions of Paris at the time.

What a wonderful hobby: collecting tiny pieces of our history! Thanks for sharing this info on WW1 letters:)

WWI was one of the bloodiest wars in history. Just months after its beginning... 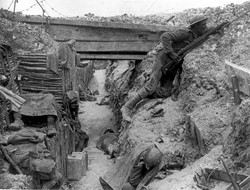 WWI was one of the bloodiest wars in history. Just months after its beginning, something miraculous happened. The war stopped. What occurred that evening, is absolutely amazing.
26%  0   3 pawpaw
Military and Historical Memorabilia

WWII was a very important part of the history of our planet. The people who had to save the world were ordinary people like you and me. Their letters tell the stories.
Loading ...
Error!