When it comes to your 1st wedding anniversary you'll want to give a thoughtful present. The kind of first anniversary gift that symbolizes your first year being married together.

by flowski
It all started with that first glance, then the first date, and a kiss, now it's been almost a year since you two tied the knot. My how time flies when you're in love! The first wedding anniversary is typically celebrated by a couple in a more intimate manner than subsequent anniversaries. Commonly a lovely evening at a nice restaurant or even a weekend get-away at a rather romantic place.

This is a really important decision because your first anniversary gift sets the stage for future presents. You might even decide to zero in on paper or clocks, because they are the suggested gifts for first anniversaries from the traditional and modern lists. Traditionally, 1st anniversary gifts are paper themed. That may sound boring initially, but sprinkle a little imagination on the idea, and you can think up some rather thoughtful and clever paper anniversary gift ideas. The modern anniversary gift theme is Clocks which when interpreted creatively encompasses a wide variety of possibilities.

Doin' your own thing? All you have to do is consider your spouses likes, dislikes, or even build off of outstanding events that have occurred over the last year and use your best judgement. Brainstorming will help you come up with several anniversary gift ideas that are excellent possibilities, then narrow it down to that perfect anniversary present.

Say why you love them in a custom book! 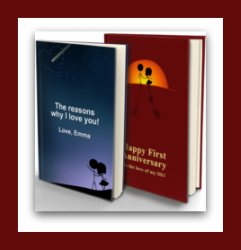 An Anniversary Journal that celebrates a couple's past, present and future together... 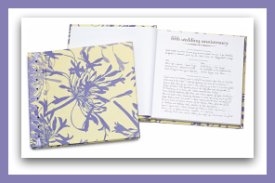 One way to be certain that you never forget your anniversaries by keeping an anniversary journal. Each chapter of your life together is preserved with this keepsake journal that chronicles your anniversaries year after year. This gorgeous journal includes plenty of space for photos and a place to write down thoughts about the previous year, plus messages to each other and how you celebrated. A wonderful gift that honors a new couple's future and a golden couple's past, this Anniversary Journal will most certainly become a priceless part of your family's history. Handmade in USA. 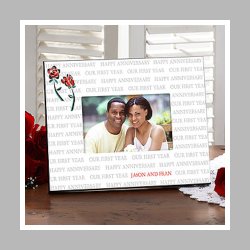 Remember thses precious first years together with a Personalized Anniversary Picture Frame to showcase a favorite picture together. This specialty first year anniversary frame is the ideal keepsake to help you remember this epic occasion for years to come. Frame measures 8" x 10" and holds a 4" x 6" photo. Our First Year Personalized Frame

Adds that final touch to any home, and makes a very special anniversary gift! 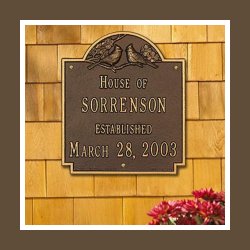 Add a truly unique and distinctive touch to your new home with this handsome Date Established Family House Plaque! Each plaque is crafted from heavy duty rust-free solid aluminum. The paint has been specifically formulated to withstand years of the harshest elements and is fully weather tested.

Nothing makes a home your own like a personalized family plaque with your family name on it. You choose from almost 20 different color combinations to match your house. The Date Established Family House Plaque is shown here in Bronze/ Gold. Each plaque is made to order in the USA and measures 12" x 10.25"

Let's take a look at a new trend in anniversary gifts... 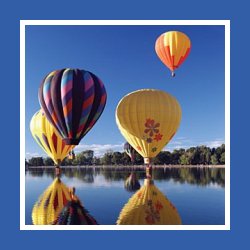 Experience gifts are becoming an increasingly trendy anniversary gift option for couples now-a-days. Giving and going together on a fabulous experience like a hot air balloon ride, dinner cruise, golf lesson, or spa visit instead the same ole' present is a great way to make new memories with that special someone you care for.

Not only do experience gifts for couples let you and your partner have some fun, but they can also strengthen your relationship. If you think about it an experience gift helps you two make memories together. Experience Anniversary Gifts

are a great way to make sure you and your partner spend quality time together and simply deciding on an experience together can teach you more about your partner's interests and about what you have in common.

A reminder to cherish each minute you have together... 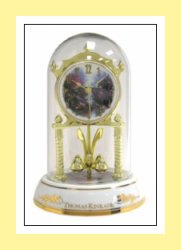 Although paper is the old-school first anniversary wedding gift, the modern 1st anniversary present is the Anniversary Clock which get it's name because it needs winding only once a year, that being on the couple's anniversary!

Modern 1st year anniversary gifts are clocks and there are a lot of great clock ideas that would be great for the home or as a gift for your spouse's office. Anniversary Clocks

Anniversary Clocks are another great gift idea, especially if your 1st anniversary gift ideas have focused on keepsakes, is a mantle clock. You can find lovely anniversary clocks (named for their popularity as an anniversary gift) that can be engraved.

The clock is a both a symbol of the timelessness of your relationship. Other than commemorating wedding anniversaries, these clocks serve ornamental purposes as well, often adding a timeless appeal to any room These clocks usually have a crystal or glass case, which allow you to see its internal parts. Thomas Kinkade Anniversary Clock, Stillwater Bridge

Some great clocks that would make a nice anniversary present for your spouse.

The certificate holder with stand makes a wonderful anniversary gift. 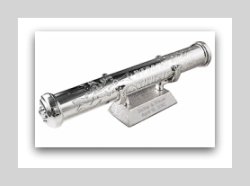 For a new bride and groom, it is especially important to to protect and preserve their most  treasured document. This attractive holder is absolutely the best place to keep your marriage certificate. Whether proudly displayed or hidden safely away, you'll know that the legal document uniting the two of you in holy matrimony is safe and sound. Celebrate your anniversary by proudly honoring the document that binds you in love.

Designed in a silver finish and decorated with angels, unscrew the end of the certificate holder to reveal a cylinder designed specifically to hold a marriage license. The words "Wedding Certificate" are embossed on the case and the silver stand can be custom personalized as well.  Wedding Certificate Holder With Engraved Stand

This Papier-mache lion head is the coolest-looking wall art I've seen in a long time. 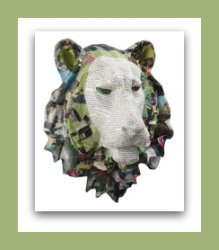 Show off your impeccable taste in paper art with this bold, paper-mache lions head. A traditional symbol of courage, authority and wisdom, this hand made folk art creation brings a fearless energy to any room. 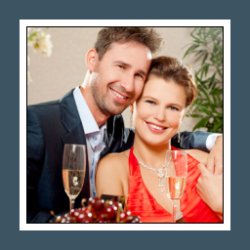 Awedding Anniversary is the big special occasion for married couples celebrated every year on the date of their wedding. It is the celebration of love, companionship, and faith in your marriage together. This occasion calls for anniversary presents that symbolize your love and togetherness.
Anniversary Gift Guide

Creative ways to include the paper theme into your 1st wedding anniversary gift.

Creative ways to include the clock theme into your 1st wedding anniversary gift.

© 2012 Flowski. All rights Reserved. This work is licensed under a Creative Commons Attribution-Noncommercial-No Derivative Works 3.0 United States License. Commercial reproduction of this Anniversary Gift Ideas Wizzley page in part, or in whole without written permission is prohibited by law. Images in this gift guide are stock photos purchased from Fotolia and are copyright protected DO NOT COPY THE PICTURES.

I just realised that my parents have a very similar clock to the one pictured here! It must have been anniversary related, I'll be sure to ask.

Wow, you really have a bunch of great ideas here! I'd love to share MyDayRegistry with your readers. It's a really sentimental gift idea where you can dedicate a day to your loved one. It makes a great and unique gift that your significant other can cherish forever.

Here's the link for your readers http://mydayregistry.com

"MyDayRegistry is an exclusive online registry where you can dedicate and register a specific date by month, day, and year in honor of a special event or person in your life."

An anniversary sundial is a good idea too - it is cooler than just getting a clock! My girlfriend got one that sits on her windowsill and makes rainbows in the room whenever the sun shines!

My anniversary is coming up soon -- not the first, but every celebration is an important one! Nice ideas for gifts! 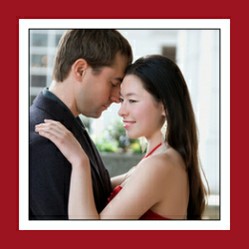 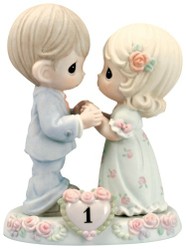 Buy online simple, cute and most romantic 1st year wedding anniversary gifts for her, him or a couple, like cool romantic figurines or traditional paper gifts like paper roses.
100%  6   11 CountrySunshine
Other US Holidays

Grab some beer, put on some Country music, decorate your yard and offer a horseshoe game. There's more than one way to celebrate National Bubba Day on June 2nd!
Loading ...
Error!