Christian Dior's Nazi niece must have troubled the family, but his sister was a heroine of the French Resistance.

Christian Dior named his first lovely perfume after his much younger sister, Catherine. Legend has it that the designer didn’t know what to call his perfume. His sister, who he called “Cherie”, dropped in to see him. Dior’s muse, Mitzah Bricard, exclaimed: “Look, it’s Miss Dior!” The name took on a life of its own.

Catherine was a brave and honourable woman, a heroine of the French Resistance.  She deserves to be remembered by a beautiful scent.  Unfortunately, Christian Dior’s niece, Francoise, was very different. She promoted Hitler, spent time in jail for burning a synagogue, and married a leading National Socialist in England.

Francoise was engaged to John Tyndall, a leader of the British National Socialist Movement, which he founded with Colin Jordan.  Eventually, she married Jordan instead in a strange Aryan-influenced ceremony.  She wore a black and gold diamond swastika necklace, and she and Jordan cut their fingers and let the blood mingle.  She also said that she was pleased to be described as a “perfect Aryan girl” when she was little.

Christian Dior cannot be blamed in any way for the actions of his niece, however.  She didn’t work for him, and the relationship wasn’t close.

Catherine received several medals for her work in the French Resistance, including the Croix de Guerre and The King’s Medal for Courage in the Course of Freedom (U.K.).  She proudly wore her medals at special occasions. She used one of Dior’s apartments for her Resistance work.  At one stage, Dior’s friends, Sauguet and Jacques Dupont, stayed there while Catherine’s underground contacts came and went at all hours, according to Christian Dior: The Man Who Made The World Look New by Marie-France Pochna.

Catherine was arrested by the Gestapo in June 1944.  She was deported and imprisoned in Ravensbruck and Torgau.  She was also forced to work at “Anton Kommando” where she produced explosives in a disused potassium mine in Prussia.  Many of the women who worked at this all-women prison died because of the severe conditions.

Christian Dior attempted to rescue his sister by getting in touch with his friend, Suzanne Lemoine, who rang the Swedish Consul General in Paris, Raoul Nordling. He got the Germans to agree to let Catherine go if her train was still in France.  Unfortunately, it was too late.

She was eventually liberated, but her time in the dreadful Nazi prisons had affected her deeply.  Emaciated, she couldn’t eat properly for months.  Christian Dior made her a cheese soufflé, her favorite dish, but she couldn’t eat it.

Catherine was one of the lucky ones – she survived the harsh conditions of the Nazi prisons and she was liberated.  Catherine Dior died in 2008.

I enjoyed this. Would also like to see that dress :-)

The beautiful dress got my attention admittedly I was clueless as to the title and now I've went on an exploration thanks to you. Very interesting indeed. Good to find you here> :)K 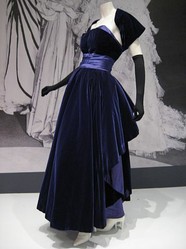