Friends With Benefits: Spiders In Your Garden, UK

Did you know - despite their vicious looks spiders might be the solution to your new healthy garden. Ugly but friendly.

Flora and Fauna are undoubtedly interconnected. It's rather simple - herbivores feed on plants, carnivores feed on herbivores, everything dies and turns into food for the plants. For a garden to function well it needs a little bit of everything. We are assuming you already have the plants and the herbivores(which we would further call pests) and now you are in need of a natural pest control, because you are a fan of nature itself and would like to keep it organic? 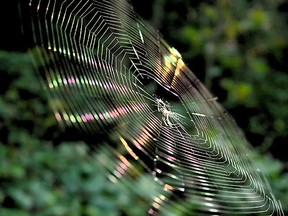 Let's say you have an issue with aphids

Or how we know them in the UK - greenflies. Why do we dislike them? Because they literally destroy your beloved plants and are every gardener's mortal enemy. So how do you approach such an issue? Do you set your garden aflame or do you pay a hag for a gardening fortune spell? Well, neither. You just need the help of the very famous garden guardians. Defenders of your vegetable Elysium. Protectors of the backyard realm. Yes, that's right, you need some small but efficient, rigorous but fair, insect-looking but arachnids

Spiders for your garden.

Side note: Just to mention that scorpions are also arachnids, but you don't need that sh*t in your garden.

It's worth mentioning that the little creepy guys don't need a precise habitat for you to provide them since there are plenty of spider species that cover most of the possible ones. In short - it's not always a web that is their home.

That sounds terrible. Are you saying they are all around us?

All we're saying is that there are more than 2 million of these handsome eight-legged gentlemen per acre of countryside. That's all we're saying.

Anyway, we are aware that spiders are so frightening to some people that there's even such thing as the arachnophobia. But in case you are not a coward you should become best gardening buddies with the the little creepy critters. 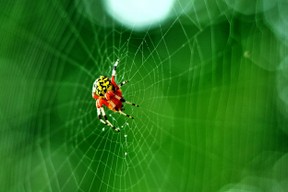 I have the guts to do it, because I am brave and have the heart of a lion. How do I attract spiders to my garden?

As we mentioned the crawlies can inhabit all kinds of terrains . So the bigger the need of them the more diverse your garden should be terrain-wise.

Throw some dead leaves between the plants. This would provide your soil with a nice organic compost in time but at first the spiders will take it as an invitation to pay your garden a visit and save your mortal soul from all the pest insects.

You can also provide your garden with bushy plants which turn out to be the perfect habitat for a spider or two.

Or leave a pot or a box of some sort sideways, which will be a great shelter for these creepy cutiepies. The gardeners from Camberley advice that it is best if you bury in half a cardboard box with the opening facing the fence or the wall(because creepy habitats attract creepy creatures, such as your new arachnid friends). This will also be beneficial for your soil from the underneath since earthworms just adore cardboard and will surely gain you extra aeration.

But if they're such avid predators, wouldn't that bring harm to the beneficial insects for my garden such as bees, let's say?

"Harm" is a rather exaggerated term. They will, in fact, feed on whatever gets in their spidish way, but the the amount of unwanted organisms they'll get rid of is far greater than the amount of the helpful ones. Sacrifices are needed. 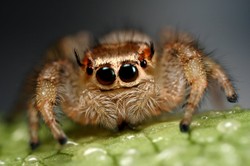