5 Weird Plants You Don't Want In Your Garden

Here are some of the weirdest, unappealing, crazy looking plants you would not want in your otherwise hospitable garden.

Five extremely unpleasant looking (or stinking) fellows you would rather NOT have in your garden, as it would appear as if you were a serial killer(by the smell of it). Still very interesting in nature with exotic qualities, making them unique in their own repulsive way. Also let's not forget - appearance is not everything!

Exotic plants could be(and in most cases are) a good addition to your garden making it look more interesting and appealing. But what if I tell you there's this plant that smells like rotting corpses? Not even joking. I will let you decide if those would make your garden appealing. I know I wouldn't want them in mine. But hey, I'm not judgemental. 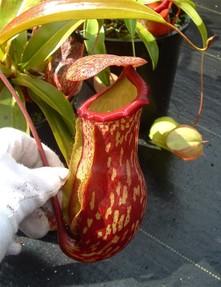 This plant is as fascinating as it is creepy. Creepy part comes from its diet. Rats, spiders, lizards, worms, termites and about anything that fits the plant's digestive cavity. Also it's ugly. But it also is a very important part of its local ecosystem. For example mosquitoes and flies have been spotted laying larva on it. They feed mainly on the feces of the tree shrew species, and ants also feast on it. Monkeys are known to drink from these plants. Fascinatingly gross. 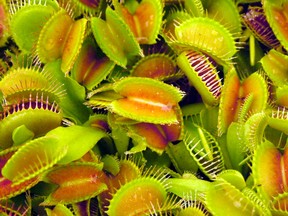 Arguably as vicious as the cacti, this is the carnivorous plant that inspired many cartoons, video games and it even stars in a movie! It vicious looks play no small part in that reputation. It has those jaw looking things with something like very sharp fangs growing out of them. They actually are there to prevent trapped pray from escaping. Also perhaps the fact that it's carnivorous(meh). Interesting enough it's capable of rapid movement. It snaps shut after two of its trigger hairs have been touched within 20 seconds of each other. Digestive enzymes do the rest. It also roars. I wish. 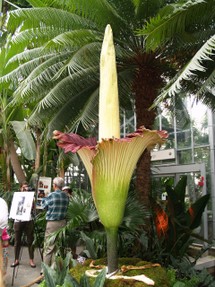 Unbelievably creatively named this flower produces the smell of rotting corpses(plural intended). It's one of the world's largest and stinkiest plants. What's interesting about it is that it is not a single flower, but it's consisted of thousands male/female flowers located on its stem. They produce oils while the spadix heats them and therefore emits the smell that attracts pollinating carrion beetles. Bless Nature and its ways! The flower itself looks magnificent on the other hand. Sadly(for your eyes, not your nose) they are endangered and only 29 have been spotted growing on US land(one belongs to the Houston Museum of Natural Science). A mature plant can reach up to 200 pounds. Of rot smelling beauty. 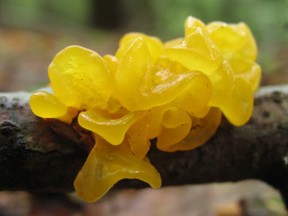 Although fungi are not classified as plants I am including the Witches' Butter , because it may or may not appear in your garden. I find this one the most cool looking from the repulsive ones in the list. Despite its unappetizing names(that perfectly suit its appearance), this fungus is edible. Kudos to the guy who had the bravery to try it out! It has no flavour whatsoever, but hey you don't complain when you drink water, do you? It is found growing on mainly dead and fallen trees. It is currently being studied because it is believed to have health benefits. Sometimes yellow squishy things posses them I guess. 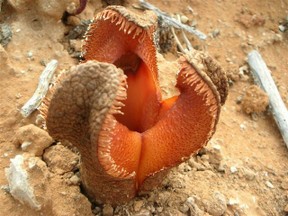 This pretty lady tops my personal “Nightmare-inducing-ugly, monstrous, unappealing, I-wouldn't-go-near-it” list. It's looks though are a survival mechanism. It's design helps directing beetles to its center via the directing hairs. The center (unexpectedly) smells how it smells when you go to the restroom and stay there for a little longer. And no, we're not talking about showering. That smell attracts dung beetles and traps them inside. Surprisingly it does not feed on them. They don't go to waste either. It keeps them there, in this poop smelling heaven, until it reaches maturity. Then it releases them with enough pollinating potential so they could fill the air with Hydrona love. Different sexes of the plant as logical posses different pollinating receptors, meaning the beetles should encounter another plant in order to successfully pollinate it. Avoid these if you don't want your garden to smell like toilet. Thanks in advance from your future visitors' behalf.

Great article, genalorainne! You really made our day at the office! The last one is also the winner in my top list! What a gross plant! Thank you for sharing! 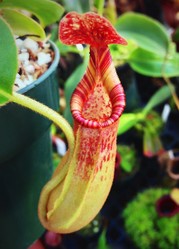