Gandhi and the Charkha Wheel

I’ve been fascinated by how people around the world spin wool and cotton, and other fibers for cloth. One interesting method is on the Charkha wheel

It’s hard to know when the Charkha was invented. The first drawings of it appeared in Baghdad (drawn in 1237), China (c. 1270) and Europe (c. 1280). The charkha wheel largely replaced the small spindle developing a system that would spin faster. It is basically a spindle with the shaft mounted sideways. A larger wheel is turned by hand and a drive band turns the smaller wheel and shaft.

There are two basic styles of charkhas. One is called a table top charkha although not all of them would fit on a table, and a box charka. The table top version is the oldest known spinning wheel. The drive wheel is turned by hand and the yarn is spun off the point of the spindle. There is no flyer arrangement so that spinning has to stop in order to wind the yarn onto the spindle in the same manner as the great wheel or walking wheel The yarn is spun by holding the wool slightly to and angle to the shaft so that it doesn’t wind on. Then, when there is enough twist to the yarn, it is held to one side so that it will wind on. 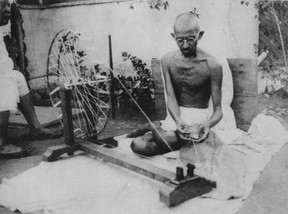 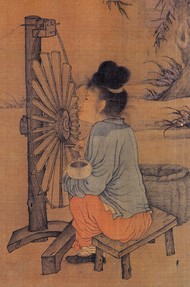 The box wheel has the wheels laying horizontally in a box that folds up for portability.Some charkhas even have a third wheel called an accelerator that increases the spin from the large drive wheel to the smaller on the shaft. This makes the shaft spin faster and is excellent for spinning short, slippery fibers like cotton.

Ghandhi and the Charkha

Mahatma Gandhi spun on a charkha and encouraged others to do the same. He saw the charkha as a symbol of independence for India. During his time, cotton was grown in India where the men harvested it and loaded it onto ships bound for England. There it was spun and woven into cloth and shipped back to India. It was so expensive that the men who grew and harvested it could not afford to buy it.

Gandhi often spun in public as a non violent protest. He is credited with the development of the box charka and the accelerator wheel. He also saw spinning as therapeutic, and called it the “elegant art.” He stated that it calmed the mind, promoted steadiness of thought and helped to control passion.

“The message of the spinning wheel is much wider than its circumference.
Its message is one of simplicity, service of mankind, living so as not to hurt others, creating an indissoluble bond between the rich and the poor, capital and labour, the prince and the peasant. That larger message is naturally for all.”

Recently, some modern spinners have rediscovered the charkha and have formed online groups dedicated to the art of the charkha. Craftsmen are turning out beautiful versions of them. One company, makes inexpensive spinning wheels out of PVC pipe and have developed their own version of the Charkha You can even even make your own if you’re handy with tools.

The Charkha
Instructions for making a tabletop charkha with pictures

Cigar Box Charkha
Make your own charkha in a cigar box

He was indeed. He had a good point about people learning to be self sufficient.

Another great article, Ragtimelil! Gandhi was an inspiration.

I like the box ones, but I never go anywhere to spin. I would collect spinning wheels if I had the room.

I've never seen a charkha before. They look incredibly handy.

How to Spin Yarn Without a Spinning Wheel

Always thought you'd like to learn how to spin, but didn't want to spend the ...

How to Buy a Spinning Wheel

Have you thought of getting a spinning wheel and relaxing to the feel of wool... 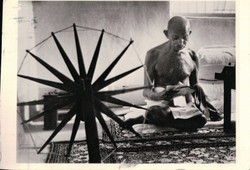 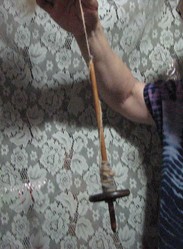 How to Spin Yarn Without a Spinning Wheel

Always thought you'd like to learn how to spin, but didn't want to spend the money on an expensive spinning wheel? Try learning on a spindle first.
27%  0   4 Ragtimelil
Fiber Art 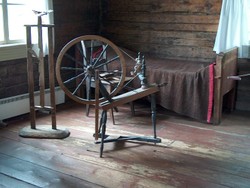 How to Buy a Spinning Wheel

Have you thought of getting a spinning wheel and relaxing to the feel of wool turning into yarn? There are a few things to consider before putting out money for a wheel.
Loading ...
Error!