I recently became a card-carrying member of findagrave.com. After years of using the site to research my family history, I decided that I would like to give something back.

Find A Grave is a web site dedicated to listing memorials and photographs of grave stones to make a virtual cemetery. All the memorial pages and photos are put up by volunteers. I thought I could at least volunteer to take some photos in cemeteries. That sounded like a pleasant way to spend an afternoon.

I accepted a request to photograph a marker in the Willis Cemetery. I had no idea, until I got there that the cemetery was huge with over 2,000 graves. I stumbled around the first day for an hour or two. I realized I was going to have to be more organized in my search. I was also going to have to wear better shoes and bring water. I was hot, thirsty and my legs were scratched up from the underbrush. This is not your big city cemetery.

Hot on the Trail

The next time I went out, I searched by sections. 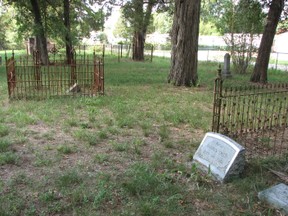 There are 6 sections currently being used including the "Old Section." I took it one by one. I got half done in one day and went back later for the rest. Still no sign of the guy I was looking for.

Someone on the Find A Grave forum suggested to me that I go to the library and see if I could find a non-alphabetized enumeration for the cemetery. If it is not alphabetized, it would be more or less written down the way the person recording the names would have walked. I could get an idea of who would be buried near the person I was looking for.

I made a trip to the nearby genealogical library and sure enough, there was the book I was looking for. I copied down half a dozen names with my guy in the middle. I thought that would be it. I ran right over to the cemetery and started hunting. All the records said he was buried in Section One. I suspect the sections had been renamed because I found some of the names I was looking for in the "Old Section". I found most of the names on the list - except for the one I was looking for and the ones on either side. I was hot, tired and thirsty (I had gulped down all my water) and ready to give up. 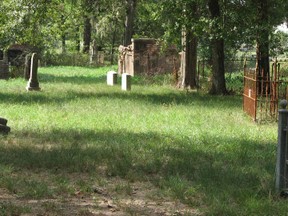 I went back online to the forum and was told that I could take a picture of where I thought the stone should be. and to let the person who requested the photo know that I simply couldn't find it. Just out of curiosity, I also looked at the Find A Grave memorials for the two on either side of my guy. One did not have a photo but the other one, a Susan King, showed a picture of a stone that had fallen and was lying flat on the ground. I was sure it would be covered over by now with leaves and dirt.

Found at the Last Minute

I made one more trip, the sixth, to photograph where I thought my missing guy would be. I looked again at the enumeration list.  Just before leaving I looked one more time at two broken bases. I realized that there was another small stone near the base and there were two initials on it -- S.K.

I brushed off the dirt and sure enough - there was Susan King's tombstone lying in front of me. I poked around at the bottom of the other base, and, yes, there was a stone down there in the dirt too. I cleaned it off and there it was. It was the one I had been looking for. The stone isn't actually even broken. It just had fallen over and is slowly sinking into the ground.

I never would have found it if I hadn't looked on Find A Grave and found a picture of the stone next to him and known that it probably was buried. It does help to try to find pictures of nearby stones! The Find A Grave web site helped me to find a grave for their web site.

A Few Things I Learned

.Know what you can and can't do to a tombstone. Do nothing to clean it unless you are a family member.

Wow. I'm trying to get some info on my Italian side of the family. I want to put some memorials up for them but I need the name of the cemetery. My sister is working on it.

Flanders. He was Welsh, during the First World War, which meant that he didn't have much of a chance of not being buried in Flanders.

Really? Where was it?

I found my great uncle Ralph's grave on this site!

Thank you. It was like a treasure hunt. I did get a nice note from the requester.

I applaud your perseverance in finding that stone, and I'll be the requester was very happy! Old cemeteries are very interesting and it's easy to make an all-day trip out of them.

Yes, they have a page for each grave. You can leave virtual flowers. It's not a family tree site, just graves. Some sites have been posted not just because someone requested it, but just because it wasn't there. I found a memorial that didn't have a picture of the tombstone, so I took a picture and posted it there - just because.

This sounds very interesting. So the site posts requests for graves and others, who live in that area volunteer to find them? I should visit the site I guess. As you know, there are a lot of old graveyards here in New England.

It's not exclusive to this country. I haven't explored other countries in it yet. 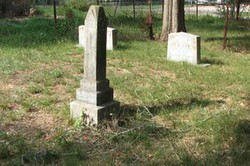