'Grok' is our archetypal hunterer-gatherer ancestor. My page will teach you the thought process behind 'Grok logic'.

'Grok' is the name that Mark Sisson, author of "The Primal Blueprint" among other books,  uses to identify us with our Paleolithic ancestors. He is the figurative model of how we should eat, exercise, and sleep. He defines our primitive hunter-gatherer lifestyle who is lean and agile with acute senses, and the endurance most of us fear we can never achieve.

Since his diet contained none of the typical, processed foods we eat today on a regular basis he didn`t suffer from systemic inflammation, heart disease, cancer, diabetes, or any of the other common, and sometimes life-threatening ailments we come into contact with in today`s world.

Modeling what he did is the premise of the 'Primal Lifestyle'. I personally, have adopted much of what he has written regarding eating clean and I feel great in doing so.

Many peoples` brains, upon hearing the term 'Paleo diet' , automatically conjure up images of a cave-man sitting around a campfire inhaling tons of meat. While the campfire may be accurate, the meat part generally isn`t. Alot of it depended on the region that man lived in. For instance, the groups that lived closer to the equator ate more plants and less protein, while the ones that lived at a higher latitude probably ate more animals.  It was all about availability. In this day and age, thanks to modern technology, we have all kinds of things available to us which help, and also hurt us. In my brain it`s a toss-up as to whether the broad area of choices are to our benefit or not.

The protein consumption is a point of high controversy and it`s really hard to prove or dispel the amounts in which they ate. We know it varied according to region, and we know humans migrated, but to prove precisely how much they ate is next to impossible in my opinion. Analysis done by the experts estimate that between fifty and sixty-five percent of our ancestors` diets were comprised of game and fish. Taking those studies into account is what made the blueprint decide upon its advised number. Even considering the controversy over amounts, the research clearly shows that protein and animal fat was a big part of our ancestral make-up.   According to the blueprint, we should aim for 0.7 and 1.0 grams per pound of our bodies` lean body mass.

Your LBM (lean body mass), is the amount your body weighs that isn`t comprised of fat. There are many calculators online to help you figure it out, but remember, the calculators are only estimates since there are many variables.

Study of Amount of Protein Eaten By Hunter-Gatherer Diets

Grains, beans, and legumes popped into our culture about 10,000 years ago which is a drop in the evolutionary bucket. According to fossil records, human health took a nose dive around that time and agriculturalists had smaller brains, shorter bodies, weaker bones, and more cavities than their hunter-gatherer ancestors. This is what was found when the bones were studied anyways. Besides that, life expectancy also dropped.

Corn syrup and vegetable oils have been with us about 100 years, and high fructose corn syrup, or HFCS, only about thiry years. Today, people carry more fat, are more diabetic, cancer-prone, and get more heart disease than people living 100 years ago, even if you take the life span differences into account. Coincidence as far as the food we`re consuming nowadays? Personally, I think there`s a direct correlation.

Our genes haven`t changed much in the last 10,000 years but our foods sure have. Our bodies are still 'Grok'. Our genes still think we are hunter-gatherers and they expect certain foods, activity levels, and sleep levels. Our genes will function optimally when you give them what they were meant to get. The awesome thing about genes is that you can turn them on and you can turn them off. It`s called gene expression. What`s so cool is that we can help control which genes are turned on and off through the foods we eat and the hormonal response that is triggered. If you have a gene for type two diabetes for instance, you can depress that gene by food, the amount of sleep you get, stress level, how we exercise, and the amount of sunlight we get. I don`t know about you, but to me that`s great news!

Since today`s average diet consists of sugars, grains, and vegetable oils for the most part, and since the inclusion of said foods people have become less healthy, I like to think there`s a correlation there. I don`t feel it`s coincidence. If I can help my body function at its optimal level by going back to basics, then dag gone it, that`s where I`m headed.

Go Ahead I Dare Ya-Eat More Fat
People new to a primal way of eating sometimes have a hard time letting go of what we`ve been told for years. Eat low fat everything. A couple ways to include more healthy fat here

Girl Gone Primal- A Review
I`ve been partaking in the Primal Lifestyle and I`d like to share my experience with you.

Less exercise and fried foods with alot of grains is my guess why......

However, I`m no expert. 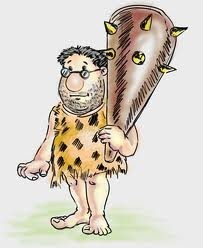