Boys costumes can range from cute to downright scary, and much depends on where it will be worn, and what others are wearing. Here is a nice range.

Children love to dress in a costume for Halloween. Some will go out for trick or treat activities. Some others will participate in an alternative to trick or treat. Because in some places it is no longer possible to trust strangers, some schools have organized trunk or treat activities, where only families known at the school are allowed to give out candy from their parked vehicles, parked around the school yard. The child gets to walk around and get candy, which has a greater probability to have not been tampered with. And, some shopping centers have a merchant version of trick or treat where the stores pass out candy. The safety factor comes from the candy being traceable more easily than things dropped into a bag at a random house.

Introduction Image: This is an Amazon affiliate program allowed image, and the product is shown below.

Some children will be invited to a Halloween costume party, which is great for those who feel they might be a little old for trick or treat.  A party can actually be held on any day near Halloween, so those going trick or treating can usually participate in both.  If this is the case, think about a washable costume for the child to wear, or have two ready.

Younger children just want to have fun, and not be part of the scary aspect of Halloween.  In fact, they may not even realize that there is a scary aspect of Halloween.  Benign costumes such as work style costumes like fireman, astronaut, or Nascar driver are good  choices  But there are also costumes of favorite characters.  One popular character that may work is the snowman Olaf.  Other favorite characters can also be considered.

Disney characters are always a good choice, but as children age they may move from the really cute characters like Mickey Mouse to something that shows they are no longer babies, like pirates, which could be the Pirates of the Caribbean. Jack Sparrow costumes are still available and high in recognition.

Superheroes are also good costume choices.  Many children will want to go out as Superman or Batman.  Of course Sheldon on the Big Bang Theory television show has made both the Green Lantern and the Flash more popular than they once were.

Often, the current movies can give a clue of what is popular.  This season we have Ant Man, which may or may not become popular.  The Teenage Ninja Mutant Turtles is also a current buzzing topic.  New movies continue to come out.  Then, the Avengers have been having box office success.  And, being current is fine, since the costume will be used for only one year, unless a sibling wears it in the future.  But, many of these characters repeat in popularity year after year as new movies are released.

Older children might enjoy a scary look whereas the same costume might not work with young children.  Blood and gore zombie style might just be the right thing, since gross looks with blood and gore seem to be a favorite of many.  So, there are some children who will opt for horror movie characters, and may well like accessories added to their costumes.

Masks can be uncomfortable.  However, older children may opt to include a mask.  A scary mask can be put on, then removed.  After the initial effect the mask serves no real purpose, so they will greet people, then remove their mask.  And, if the older child is out trick or treating the mask can be added as the bell is about to be rung, then removed as the group walks to the next house.

Children should dress for the climate in the area in which they live.  In some places this is easy to predict.  In others, temperature can vary year to year, so a costume that can cover layers of clothing hidden under it is probably the best alternative.

And, I meant to say that I really like the fireman one, too!

I was going for a variety.

Call me old fashioned, but I really like the Superman costume the best. Not so crazy about the Jeff Gordon one, though. However, if some clever soul would come up with an A.J, Foyt outfit, I'd be first in line to buy that!

This was something new to me this year, but I could have missed it. With batteries and LEDs the lighting is possible.

The idea of a Halloween costume lighting up is cool - I have always loved special effects.

It may be, but since it lights up it may be too pricey.

I can't wait to see the Ant Man movie. I bet it will be a popular Halloween costume. 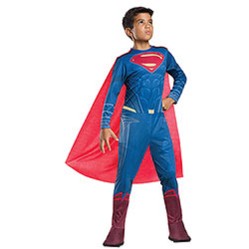