Head North West For Spectacular Birding in The Land Of Snow

Of late birding in India has received a lot of traction from avian enthusiasts all over the World. Himachal Pradesh receives the bulk of visitors for bird watching in North India.

Himachal Pradesh is a mountainous terrain dominated by the Western Himalayan Range with the tallest mountains in the World. The range marks the northern boundary of India most of which is impenetrable and is home to some of the most enchanting lands with extreme biodiversity in terms of flora and fauna. Bird watching here is fun with a wide variety of species that can be seen on a trip.

Most of the state is snow-bound in winters and is home to pale-arctic migrants who arrive here in the cold on Himalayan tops and elsewhere whence the climate becomes extreme. These migrants add to the number of the species and can be seen during the monsoon as well since the rain is limited.

The State is home to a large number of resident species and local migrants which linger around most of the time. These make the bulk of the species check listed on ornithological surveys and organized bird watching tours.

The name Himachal Pradesh literately means land laden with snow in Hindi the local dialect. The snow-bound destinations in the State are home to hill resorts ideal for skiing in winters besides providing wonderful holiday experiences.

Another activity popular in some hot spots across the State is an eclectic recreation we call birding. Though not as yet popular in India on an industry scale overseas visitors arrive here in good numbers to make it an economically viable industry for the locals and the Nation-State as well.

This undulating land is characterized by extreme peaks, mountains, lakes, and rivers flowing through valleys from the mountain tops. The unique landscape creates a panoramic picture and enchants holidaymakers on arrival. The climate varies from glacial up North dominated by alpine forests to hot and humid down south. Places like Lauhal Spiti are devoid of rain while heavy torrents affect some places in the state. At many places, bird watching is possible during the Indian monsoon as there is no rain for slush formation to affect the movement of the birders. Old river systems draining into the Ganga basin further create diverse terrain which increases the avian diversity as well.

The tourism destinations in the State do not necessarily constitute birding hot spots since they are more popular as weekend getaways and ski resorts. There are many Hindu pilgrimage sites or temples in these places which have turned them into pilgrimage centers.

Some of the avian hot spots in Himachal Pradesh are:

Situated at the height of 1457 m it is the Head Quarters of Kangra District with many suburbs. Mcleodgunj at upper reaches is one of the suburbs and is home to Dalai Lama the Tibetan Exile. Surroundings comprise Alpine and Deodar coniferous flora.

Picturesque Kangra Valley with rising peaks is home to coniferous forests and is fed by a number of perennial streams. Dharamsala is part of the spread of the valley, and hence is a popular tourist center and grounds for avian activities.

At an average height of 2708 meters, the highest peak at 3200 m is called Hatu. Covered in snow during the winters the destination exhibits a diverse climate throughout the year.  The temperature remains pleasant throughout the year but winters invite skiers from far and wide.

The forests are comprised of coniferous or fir trees and dominant among them are the Hazleneut, Oak, Poplar, and Maple. The shrubs which occupy the ground level are ideal for nesting and foraging for food.

It is a hill resort and wildlife sanctuary in part situated at a height of 2250 m about 44 km from Shimla, the capital city of Himachal Pradesh. It is popular with tourists due to the virgin forests comprising of deodar, chir pine, oak, and poplar creating a panoramic setting. At the sanctuary, one can see exotic wildlife and birds like the cheer pheasant which is a target species. The area of the sanctuary is 110 sq. km as is quite popular among the birders.

The NP stretches from an altitude of 1500 to 6000 m in the Himalayas, it is a meeting ground between two zoogeographical regions namely the pale-arctic and oriental realms. It has some commonality with Central and Western Asian regions. A lot of characteristic features have been shaped as a result of tectonic plate movement and the continental drift which resulted in the formation of the Himalayas.

These are comparatively new formations and the tallest in the World.  Himachal Pradesh is situated in Western Himalayas and much land has been notified as wildlife sanctuaries and National Parks while some destinations are popular as hill resorts. Due to territorial upheaval, altitude range and creation of diverse terrain, weather patterns and cold climate the State proves to be an excellent habitat for avian species resident and migratory. It is home to approximately 750 species which can be seen at many places during the seasons. Some of the hot spots are as mentioned below.

The state bird is Western Tragopan a brightly plumed pheasant that inhabits the hilly terrain. It is one of the rarest pheasants in Himachal also known as "phulgar". The hilly destinations are the best habitats of pheasants like Monal, Cheer and Koklass, tragopans, raptors like the Himalayan Griffon, bearded vulture, though, and Himalayan Snow Cock. Some more of the interesting avian species are listed below:

This is a small list of avian species found in the state. More can be check listed on tour to destinations mentioned above.

Endowed with full-fledged tourism infrastructure. The destinations are connected by a good road network on which taxis, buses and private cars ply. The rail network also interconnects some of the hot spots mention here. Hence transportation is no problem for birders arriving here on expedition.

The accommodations range from budget to high-end and are established everywhere. They provide modern amenities, facilities, and good services. The travel services providers like agents and car transporters are found in and around the towns. The best way of bird watching in Himachal is on package tours. These are organized by tour operators with expertise in ornithological surveys. They take care of all travel essentials and accommodations besides providing birding guides at all destinations. Guides are necessary in order to identify the local avian species.

The state is easily accessible from New Delhi, the capital of India with an International Airport. It is connected by road and rail as well. The Capital is connected with all Metros in India by Air and good highways.

Though winter is the best month for bird watching in some destinations monsoon trips are quite successful due to the paucity of rains.

Temperatures in monsoon would be less in winters it can touch minus to 10 degrees C. Yes you are right about the status of bar headed goose. Thanks

pateluday, Thank you for pictures, practicalities and products.
In particular, what lovely product lines about Krishna and his favorite milkmaid!
What temperatures do birdwatchers face in Himachal Pradesh during monsoon versus winter months?
Is the bar-headed goose interpreted in most Indian languages as the hamsa vehicle of Saraswati? English language sources here tend to list them as such.

Yes the long list is to impress upon how big it is and the fantastic number of avian species found in the region.

Yes the long list is to impress upon how big it is and the fantastic number of avian species found in the region.

It is good you include both large birds and small birds. The list is quite long. 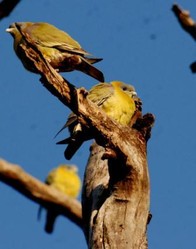 This is an article about Kanha National Park situated in Central India in the State of MP. The article informs how to organize a successful and enjoyable tiger safari in Kanha.
50%  2   6 pateluday
India