How to Choose and Use a Soaker Hose

Irrigating a garden or landscape area can be the most important thing you can do to ensure the survival of your plants. A soaker hose can be an easy solution.

Should You Use a Soaker Hose in Your Garden?

I have a landscape bed that runs about 100 ft along the southern end of our lot. It's a shady area, but it tends to stay dry, so in order for my ferns, hosta and other shade friendly plants to survive, I have to water in the summertime during the driest periods. I hated the task until I finally began using a soaker hose.

Certainly, there are other ways of irrigating a garden or landscaped area, but for me, the soaker hose was perfect for the area I had.

I spent some time researching the topic before I decided that a soaker hose was the right answer for me. Here is what I found out.

Prior to this point, when I watered, I uncoiled our garden hose, walked across the yard, and sprayed the area with a hose end sprayer. I often stood for over 30 minutes as I did this. It seemed to be a painful, tremendous waste of time to me. But, one year when I simply refused to do it, many of the plants died and I was left with a bare garden.

The soaker hose saved me from this. It saved me the time I once wasted standing there holding the sprayer and it saved me the struggle of dragging out the garden hose and coiling it back up after I was done. The other benefit is that I end up using less water because none of it gets wasted through evaporation in the air or overspraying the area and watering my neighbors yard as well.

These hoses are also said to be more effective because they deliver the water right to the place it's needed. The ground around the roots of the plants. They are also said to play a role in decreasing the incidence of leaf diseases because the foliage is left dry.

Where to Use and How To Place a Soaker Hose

I did my research before I decided to move ahead. I found that a soaker hose is used most effectively on level ground which matched up with the space I was concerned about watering. I suppose if you had a terraced area that would work as well, as long as you could run multiple hoses, each on a separate level or if you could use short lengths of tubing or regular hoses to connect them while allowing you to keep the soaker hoses on level ground.

They are ideal in garden beds and landscaped areas as well as around trees.

I also discovered that these hoses will saturate the ground in an area about three feet wide, so approximately a swath 18" to each side of where the hose is placed in loose soil or sandy areas and a bit wider (maybe 24") in clay soils (like my own). They can be run relatively close to the base of plants, within 1-2" is acceptable, and for new plants even closer.

For me to cover my 100' stretch of landscaping which is 8' wide, I could use just two 100' hoses. Although they are best on level ground, it's perfectly acceptable for them to snake around the various plants to get the best placement.

In my case, my husband ran an underground line out to the area in question and put in a spigot. I had read that using a regulator can be important to assure you get the right pressure but our water pressure tends to be low, therefore, I simply experimented with the setting, making sure that the water was seeping and not spraying. However, using the regulator is probably wise in most instances.

A filter is also recommended to keep sediment and debris from clogging up the tiny holes in the hose. This we did. We live in a rural area and have well water, so I felt this was an absolute must!

As I unpackaged my new soaker hose, it remained coiled. I had read about how some people stake it down with clips, but I simply rolled it out flat in the hot sun, weighing it down with some miscellaneous items, and let it lie for an hour. Then, when I put it in place, it was flat and straight, and has remained so. (I do take it up and store it indoors over the winter)

I attached a short 4' length of hose to the faucet and then attached my soaker hose with filter and was able to easily cover the area. Of course a Y connector can be used for attaching two hoses. I learned quickly that you need to be sure the hose is laid so that the holes are facing downward, otherwise you get a fine misting spray versus a soaking.

I've read that you can put it on a timer, but I just run mine for 30 minutes about twice per week during the drier period of the year and perhaps three times per week in extreme conditions. The area where I have my soaker hose is well shaded, but I've also read that it can be covered with mulch (not dirt) to protect it from any sun damage

My soaker hose has been in use only a year and it managed to keep my plants thriving throughout the driest part of the year. I probably used it for a total of 6 weeks, but that's all that I needed. I can't quantify the savings as far as money, but I know that it saved me a great deal of time and most certainly, a lot of wasted water.

Using a gardening stool or seat means not having to constantly stoop over or ...

Step back into yesteryear with these beautiful antique watering cans. The hav... 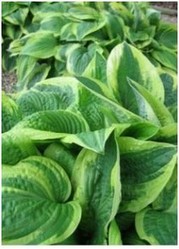 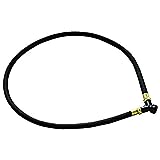 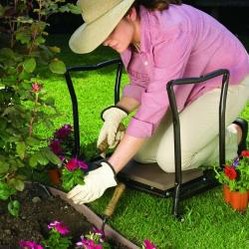 Using a gardening stool or seat means not having to constantly stoop over or kneel down while tending to your garden. Gardening doesn't have to be a pain in the back!
45%  4   5 Digby_Adams
Gardening Tools 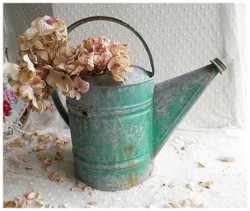 Step back into yesteryear with these beautiful antique watering cans. The have beautiful long necks and galvanized patinas. They'll create a peaceful gardening routine.
Loading ...
Error!