Misting fans are an affordable way to stay cool outdoors. Find out more about how they work, what they can do for you, and how to stay safe while using them.

What are misting fans?
A misting fan is an effective way of cooling air in large warehouses, garages, and so forth, as well as outdoors. Many people have seen them in use at summer fairs, festivals, and sporting events. Smaller ones are often used on patios, decks, and in gardens for similar purposes.

How much cooling can they provide?
It varies. Generally speaking, they can cool the air by a few degrees or up to 20 to 30 degrees in the nearby area.

How does a misting fan work?
A misting fan typically includes a regular fan with a misting system. The misting system provides moisture and the fan circulates the cooled down air. The spray nozzles create a fine mist made up of tiny water droplets, which evaporate when they contact the air. This helps to draw out heat from the air, bringing down the temperature. This cooler air is then circulated.

Will I get wet?
With a good misting fan, people shouldn't get water droplets on their skin. The mist is very fine, and most of it evaporates before reaching anyone.

Are there other benefits of using a misting fan?
Misting fans reportedly cut down on dust and other particles in the air. They are also known to all but eliminate the presence of flying insects such as mosquitoes.

On this page you will find buying tips, a few safety tips, and a few floor model misting fans as well as a separate misting system that can be added to an existing fan.

Whether building your own misting fan or buying one, there are a few precautions you should observe to reduce the risk of electrical shock, injury,or damage to the fan or other items. Always read the manufacturer's instructions regarding safety, care, and maintenance. Here are a few general tips:

1. Use a GFCI outlet.
2. Store the fan indoors and don't expose it to rain.
3. Use fans only as indicated, indoor models should not be used outdoors.
4. Do not run the device when unattended and unplug when not in use.
5. Inspect the cord prior to each use and do not use if damaged.
6. Keep vents clear and loose objects at least 8 to 10 feet away.
7. Assure that water pressure does not exceed what is recommended for the fan and use a filter on the water line to prevent clogging.
8. Check filters routinely and clean/replace.
9. Keep furniture, fabrics, and so forth at least 12 feet away from air flow/mist.
10. Assure the device is stable. It should be set flat on the floor.

This misting fan system is the most affordable way of staying cool outdoors. It comes with 7 ft of 1/4" polyethylene tubing and brass misting nozzles which are placed at 6" intervals. It can be attached to an existing electric fan to circulate the air and water mist which comes from your own standard 3/4" garden hose.

It comes fully assembled and can be used on fans up to 36" in size. It can chill up 30 degrees Fahrenheit.

While this fan can be used indoors or outdoors, the misting apparatus makes it perfect for outdoor use. It offers 3 fan speeds with 5 misting nozzels. This sturdy floor fan is height adjustable from 48" to 62" and has a wide, sturdy base.

It has a waterproof motor and a 6.5' feed hose which connects to a standard spigot or garden hose.

SPT provides this unit. It can be used as a regular fan, a misting fan, or a humidifier. The humidifier can be used independent of the fan or in conjunction with it. The unit includes a 12" fan with a 9 hour timer and 3 fan speeds. It measures 11.4" x 17.9' x 32.1" and has casters that make it very easy to move around.

Great for both humidifying the air and cooling on hot days, this fan is very portable. It can provide up to 19 gallons of evaporative cooling mist per day to reduce temperatures by as much as 20 degrees Fahrenheit and features an anti-clogging system for worry free operation. It consumes only 70 watts of power per hour so it won't drive up energy bills.

This durable misting fan from Aero Mist is great for outdoor duty. It has all metal construction with stainless steel hardware, aluminum blades, and a stainless steel mist ring. It comes with 25' of nylon tubing and a hose adapter with filter to eliminate clogging. This fan has a corrosion resistant black finish and provides 3 speeds to get the airflow you need.

WOW I instantly thought of those you carry around at theme parks and how nice they are now I see you can have them with you in the comfort of your own home, yard and the like. How cool, great article thanks 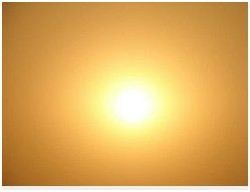 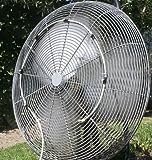 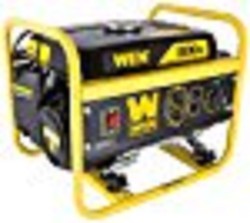 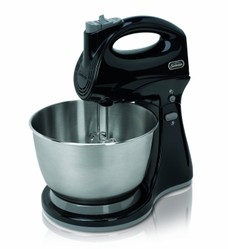