How to Run Properly without Hurting Yourself

Learn how to run properly without hurting yourself. Read important tips and tricks about long distance running and find the perfect running shoes!

I started running in May 2012 and I've already had my fair share of injuries and accidents from my running adventures.

In this article for beginners and intermediates I want to share my knowledge about running and how to avoid running injuries - after reading this article you'll understand how to run properly without hurting yourself.

I will explain how you can improve your running mindset and I'll also show you which running equipment helps you preventing running injuries.

To run properly mainly means to run responsibly. It means that you learn to listen to your body's unique signals.

Most runners get injured during their trainings, most of them because they don't listen to their bodies. Only few running accidents are really 'accidents' where other forces are involved than pride, ignorance and lack of knowledge.

Let's start with the mindset of a runner.

"Human beings are made up of flesh and blood, and a miracle fiber called courage" (George Patton)

He'll never exaggerate without a purpose 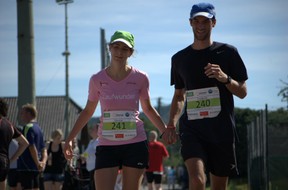 Of course the professional runners overdo it sometimes when they're determined to win a race. But that's their job, their passion, their purpose, their reason to breathe and live.

We - the amateur runners - can safely calm down and just enjoy running as some kind of hobby.

This teaches us to not exaggerate and listen to our bodies.

Your mindset is key in the process of becoming a good and stable runner. You have to endure the pain of sore muscles and still you must be able to recognize 'real injuries' in the moment they occur. That's not easy. You'll have to learn to distinguish between sore muscles and serious patellas problems.

A healthy mindset consists of a few rules of thumb:

If you obey to these simple rules you'll reduce the amount of injuries significantly.

Let me explain: When you're training you want to run properly so you can perhaps participate in a race or two per quarter. Giving more than 80% is not necessary to train your body. You can of course attempt to run 100% or even 110% of your maximum capabilities but you should do so only temporay and with a purpose. I mean you'll need a decent training plan designed by professionals to make sure your body can do 'it'.

Most injuries 'happen' because the runner doesn't listen to his or her body. When you're in need of a (short) break why not give in? Have a (short) break and calm down. Don't overdo it. Gasping for your breath may seem athlete-like but it's not advisable to stay at this level of exhaustion for the whole session!

The last rule of thumb you should adopt is the most effective one. Whenever you doubt your abilities you should ask yourself whether you would want another person (his or her body specifically) to endure that amount of pain, exhaustion or danger. In most cases you'll answer "NO!" and by then you'll have another lesson learned.

How to Fix Injuries, Stay Active, and Run Pain-Free

Let's see if you're a typical runner...

Have you been injured recently?

Treat yourself! With comfortable running gear!

You'll need shoes, shorts and a shirt - nothing more.

In the following section I'll show three perfect shoe models for beginners who want learn how to run properly and without injuring themselves.

Additionally I'll present a few other basics like running shorts, running shirts and other running gear. You don't really need most of the stuff on the market but some clothes can really help you to avoid injuries. Let's have a look.

"If you fail to prepare, prepare to fail." (unknown source)

You don't want to run naked, do you?

Running properly is not that hard

If you know the following tricks... 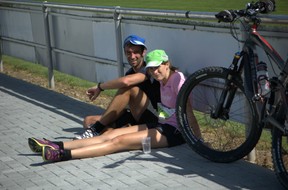 In the following section we'll finally talk about some of my most valuable tricks so you can learn how to run properly.

If you use them as a guideline you'll experience a lot less injuries in your running career. Promise!

PS: That's me and my partner in the picture on the right. We just finished a 6.2 mile run in August 2012 and are pretty exhausted due to the extreme heat on that day.

PPS: I've published two other articles about running which might be interesting for you: Long distance running (hubpages.com) and running a 5k (squidoo.com)

Make the most of your training sessions 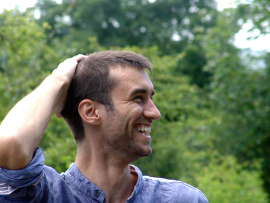 I love running, but I started when I still despised it. After watching a video about the IRONMAN contest on Hawaii I was hooked. Seeing the athletes on my monitor was reviving.

When I'm not running, cycling, swimming, hiking or playing mah-jongg I'm probably working on one of my several projects.

I'm a passionate personal development coach at www.salaazy.com and write articles for those who want to grow (and who doesn't want to?) - come and visit me there if you like.

My dad has been doing marathons, and triathlons for the past 9 or 10 years or so. He started at well over 300 pounds, just after being diagnosed diabetic, and he's never quit. Although, he's traded out running for biking as his new favorite hobby, the running still finds it's way in there with the triathlons and whatnot. ;)

But yeah, my dad doing all of that told me that the only thing holding me back from doing it myself was just fear and the belief that I couldn't. When I first started, my tri coaches had me do run/walk alternations, and it started a minute each, and then two minutes running, one minute walking, then three and one and so on...and not even four weeks later I was straight up running four miles. ME! So yes, anyone really can do it, and once you start you can't stop, it really is addicting. :)

I know my coaches always encouraged me to be mindful of keeping a cadence over a pace, so if I got tired and needed to walk, it was okay. I could slow down so long as I kept the same step cadence. --Is that essentially the same thing as keeping a solid pace when running? Or was that more important because I was training for a specific race that I was competing it.

My coaches also showed me how to pick the right shoe, I over-pronate, which can lead to painful knees! So I know what to look for in a shoe! So I totally agree, a good shoe is the best starting place for any runner, it can make a huge difference. And for women, the right bra too....just throwin' that one out there!

Now-a-days I just run on my own, and aside from occasional shin splints, I sometimes get this weird injury, that so far it seems I can only help by taking a break from running-- it is always in the arch of my foot, and I don't feel it coming on, or anything, until my whole foot suddenly cramps up and then it can be really painful to walk for a few days. Would you know anything about that? I don't know what I'm doing to cause it, and I'm not sure what I could be doing to prevent it. :/

The only right way to run is to run at your own pace, no matter how slow that might be :-D

What a great guide to running properly. I walk and bike a lot, have running (marathon) friends and once tried to keep up, it was painful the day after. I learned my lesson. There certainly is a right way and a wrong way to run. Thanks again for the heads up. :)K

Adidas is about to release the barefoot running shoe Adipure Adapt. What doe...

Everyone loves Vibram Five Fingers barefoot running shoes, and finding the be... 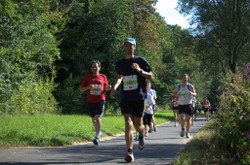 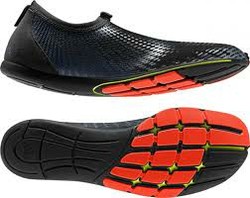 Adidas is about to release the barefoot running shoe Adipure Adapt. What does it mean to run with bare feet?
19%  1   2 eslevy17
Jogging 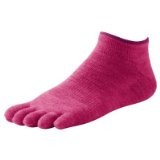