Hugelkultur is a very particular kind of raised bed used much in Germany and Austria.

The word hugel mean mound, so hugelkultur is growing that uses a system of well-constructed raised beds on which to grow a wide range of fruit and vegetables. It is a system of growing that suits the steep pastures of the Alpine regions of Germany and Austria, where mountain soils are shallow and in need of enhancement, as their nutrients have been leached away and washed downhill by heavy rains, a problem common with mountain soils.

Picture of a hugel in development courtesy of ommbeu

How to Build a Hugel

Of the many good ideas to come from Germany, one little noticed, but very useful one is hugelkultur, a technique used in Alpine regions of Germany and Austria to enable mountain farmers to make the most of  limited space for growing. The word Hugel means mound, and  the technique involves making a mound, either a round one or one with a ridge at the top and growing on it. While very useful in mountain regions, it can also be profitably used in desert zones and areas where the soil is waterlogged and therefore so oxygen depleted that it is unsuitable for growing crops.

The basic technique is to dig a trench about 0.3 metres deep and fill it with logs and branches to form the basis of the hugel. This trench can be any length you like, and there is nothing to stop it being long. The logs and branches will over the coming years decay slowly releasing their nutrients for the vegetables. It is better to use wood that is in a state of decay already, for in the initial stages of decay the wood steals nitrogen from the soil at the expense of the vegetables, but in later stages of decay this nitrogen is returned.

Above the trench the soil from the trench is heaped up into a layer, and the grassy turfs laid face down on top of the  soil.This is to ensure that the grass does not grow upwards into the vegetable bed, but that it rots down into a source of nutrients. This technique of laying turfs face down is a common one and is used in the making of loam piles and lazy beds. A loam pile is a means of converting turf heaps into soil, and lazy beds used to be common in the West of Ireland and Scotland, and you can find out more about them in my article Growing on the Edge.

Above the upended turfs is laid layer upon layer of organic material: leaves, manure, compost, paper, cardboard and straw. In fact, anything that will rot down is permissible, though there are some woods that you  do not want, which I will identify further down.Ideally the materials will be mixed together so as to  provide a balanced mix of nitrogenous materials, such as leaves and grass, and carbonaceous materials, such as wood and cardboard. This way you get the best results from the hugel. Planks or logs can be placed along the sides so as to minimize soil slippage.

Hugels decay over time and need replacement, but as they decay they crumble a bit and this allows air to enter the root zone, fostering plant growth. So even the decay is a winning situation.

The books shown below will give you an insight into the world of Sepp Holzer, an expert mountain farmer who has developed hugelkultur greatly.

Hugels can be small or large, but large ones are considered better, as they contain a wider range of nutrients than smaller ones do. Anyone who has touched a pile of wood chip knows how hot it can feel as it decomposes, and this is the same with the wood in the trench. The advantage that this gives is, beside the nutrients released by the decay, the bed is being warmed naturally and so can continue to produce in seasons when the weather is becoming colder.

The wood in the trench at the hugel's base also functions as a water retention agent, so it can take the winter rains and hold on to them, useful  if there is a dry season in Spring or Summer. Yet having the hugel raised above ground means that this technique can be used in areas where ground water levels are so high as to make the ground saturated and unsuitable for horticulture. I thought of this as I was watching a television programme about a community attempting to be self-sufficient on the West Coast of Scotland and facing a waterlogged soil. Hugels and lazy beds would have made their lives so much easier. A well made hugel needs little or no watering, except in drought conditions.

Another advantage is that hugels can be quite tall, even to the point that they can be nearly as tall as a small human, and taller than some. This means that you can work them with less bending than you would do on a conventional flat bed.

They also make better use of limited space. Imagine that you have a plot six feet by ten feet, that is sixty square feet of growing space. A hugel ten feet long would have sides that had a hundred square feet of space.

Getting the wood right

It is important to select the right kinds of wood and even more important to avoid the wrong ones. The wood that seem to compost well in a hugel are as follows: alder, aspen, apple birch, cottonwood,maple,oak, poplar and willow. Willow should be dead as it will sprout in the hugel, as willow is a tree that sprouts easily.

There are certain woods that you should avoid.Black locust does not decay. Black walnut is one of those plant nasties that secrete a toxin known as juglone that kills off the plant's rivals;and Americans take note, for you have far more redwoods than we British have, redwood  secretes a poison that inhibits the germination of seeds of other plants. There are so few  redwoods in my region that this advice is merely academic for me, but for some of you it is relevant.

I had a small hugel last year, which I based on a pile of branches from pruned fruit trees and a small  fruit tree stump. It worked for a year and then I took it up to reorganize the raised beds, but of the branches and stump there was nothing left, all had decayed in full.  I had potatoes and onions from my small hugel, and people like Sepp Holzer  can grow all sorts of vegetables, and even grow small fruit trees and bushes. I am thinking of another one, and I know where to put it. I have been using space near the fruit trees to cultivate in two rubble sacks, which allow me to grow in an area where vegetables would be out-competed by tree roots. They are looking a bit worn now, so they are being taken up, and I have logs a plenty from the council's felling of the hawthorn hedge next to my plot. I may base the hugel on logs and use leaves, wood chip and root grindings provided by the council free to allotments. So a hugel is on the cards, but that's a job for later in the year.

In Permaculture there are no hard and fast rules, so if a mound needs initial covering, cover it.

So you got a storm last night as well. For the first time in my forty one years here in Stretford there was flooding. Fortunately, my house was not affected, as I live near the centre, but minor flooding hit areas near the river.

frankbeswick, Thank you for the practicalities and products. I have the permaculture books but the two Hugelkulture books were unknown to me.
Does one in the beginning cover the mound with plastic or textile to keep the lightweight materials, such as cardboard and leaves, weighted down? There's quite a wind here sometimes. Last night's winds left quite a few branches from the old box elder, black walnut, silver maple and slippery elm here, there, everywhere.

Well observed, but you might place bushes or tall plants on the less sunny side, for they will reach upwards to take the light.

I see how they increase the square footage, but the side away from the sun is not so great for vegetable growing. Is that side vertical? That would indeed enhance garden size.

I had never heard of these before. Great detail. TY 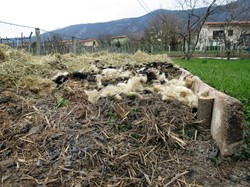