Yes, I admit it, I'm an internet addict. My intervention came late one night when the 'net went down, and it wasn't pretty. Are you addicted, too? Take a quiz to find out.

"I’ve got to wait four days until my internet is turned back on?"

That was me late one Saturday night talking to a representative from my internet provider.

My internet had suddenly died while I was mid swipe on my iPad. I braved nearly two hours, two reps, countless power cycles, and a whole lot of prayer to revive my lost connection.

The diagnosis? My modem was dead.

And nobody informed me Florida was in the boonies. There wasn't a store within a two-hour radius where I could go pick up a replacement.

Oh my gosh, I had to wait for it via snail mail. On Wednesday.

Am I addicted to the internet? Maybe. But if you're reading this, there's a good chance you are, too.

Hi. I'm Abby, and it's been 2 Minutes since I last updated my status.

I never considered myself an internet junkie. I thought I could take the 'net or leave it. But when my plug got yanked, it was a completely different story.

At least now I know it's not just me. More than one third of Americans spend at least five hours on the internet a day, and that's on the low end of the spectrum.

That's eye opening to me. Since learning that statistic, I've sat back and evaluated my usage. And although I fall short of five hours, I realize it can be a slippery slope down into the internet abyss.

So what are we doing that's taking up a quarter or more of our day? I mean, there's only so many selfies you can post, gadgets to shop for, and emails to check.

Granted, gamers do make up the majority of the internet addiction crowd, with the most extreme gamers spending up to 45 hours a week with their eyes glued to a screen.

Social networkers are quickly catching up to the geeky gamers, though. Those of us who constantly feel the need to update our statuses and send out a tweet to our peeps are wasting nearly six hours a day.

Shopping, gambling, pornography, and general searching are the other online activities that are taking out a big chunk of our day.

Nobody wants to think they're spending that much time online, but when you whip out your smartphone for a minute or two, it adds up. Before you know it, you've tweeted, posted, emailed, and surfed several hours of your life away.

Am I Addicted to the Internet?

If you had told me the day before my meltdown I was addicted to the internet, I would have called you crazy.

After that Saturday, though, I've looked back, and I was online more than I realized. My typical day included:

Checking my email,Twitter, stats, news apps, etc., before I got up in the mornings.

Once at work, I'd double check my email or kill some time with online window shopping or just general surfing.

At lunch, I'd check my email again, Twitter, and various news or entertainment apps to kill time until it was time to go back to work.

After I'd get home, it was generally a mixture of everything I'd done online during the day.

Are You Guilty of These Techie Habits?

So where is the line between I'm normal, I'm a casual user, and I can't live without it?

As I learned from my experience, that line can be blurry. It takes honest reflection on your part and input from your friends and family to determine whether the internet is your drug. If you find you often forget the fact that you even have a smartphone, iPad, or any other device, you likely don't have a problem.

If you check your device at least once every few hours, you're probably a casual user.

However, if you feel the need to check your device several times an hour, I hate to break it to you, but you're addicted.

For most people, all it takes is a conscious effort to put down the device and do something worthwhile instead.

Cutting back on your usage, though, is sometimes only half the battle. At least 30 percent of people say they feel withdrawal symptoms when they're deprived of their online gadgets.

Internet addicts itching with withdrawal might sound hilarious, but I think it's a real problem they face.

I feel I did have a mild form of internet withdrawal, and my advice to anyone trying to scale down their usage is find something active to do to keep your hands and your mind occupied.

My Four Stages of Internet Withdrawal

Oh, the joys of an internet junkie's detox.

While I don't know how anyone else reacts to being disconnected from the web, my emotions ran the gamut:

By the end of Hour 1 (yes, this was only after an hour)  I was already making time in my schedule to drive somewhere to bum internet.

Video: You Know You're Addicted to the Internet When...

How to Get Over Your Technology Addiction

Back away from your device and step back into the world of humanity.

So if I'm not plugging in, just what should I be doing instead?

You live and learn, and then you write about it.

After my tantrum, I now limit how often and how long I am plugged into the internet.

I'm not going to lie to you, I still feel the compelling need to check email, feeds, and tweets like an addict looking to score her next hit.

Instead of looking for a device to keep me entertained, I now fill my time with work and hobbies I enjoy doing, such as writing, piano, and crafts.

Will there be another meltdown in my future? Well, let's just say I won't be happy if I'm suddenly unplugged, but it won't be the end of my world.

It does really creep into your time without you noticing it's happening! Thanks for reading, I'm glad you enjoyed it!

Sometimes it's hard to stay away from the internet. I know sometimes I really want to but since I am a blogger I have to write blog posts then promote them. What I do is have a specific time I do all of that so when I'm done I am done. However, I do login to facebook to talk with family and friends. It's like you get tired of the internet but you are constantly being dragged back in.

I don't have a smartphone either but I am always on my laptop and that really isn't much better. This was a fun but very true read! Thanks for sharing this with us!

This was a fun article. Pretty scary, too. I'm reading another book right now along these lines, called In Praise of Slow. I wish I could take things slowly more often and be offline more. But then again, it would be hard to work without the Internet. And then, well, I do enjoy reading stuff on Wizzley ;-)

I'm only on the internet to work! Really... well, mostly. I don't have a smart phone or iPad, and that helps keep me in line. I would miss the internet for looking up useful recipes, or "how to" articles, otherwise I would seriously like to be off more often. Guess I am not considered normal these days.

It's a double edged sword for us who do

Interesting and worth reading, i am also addicted to internet and once it goes down then i realise how much it means to me especially since i am earning online

Thank you @ologsinquito! Sometimes I just want to know what's going on. Like I'll go viral or something and I'll miss it. Well, I can dream anyway:)

I forgot to say this is a great article. One of the best. 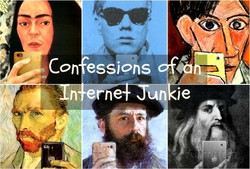 Hooked: The Pitfalls of Media, Technology and Social Networking
100%  37   10 AbbyFitz
Other Social Issues