This is a selection of photos among the hundreds I took while in Nepal for three months in 2010, now available as postcards, note cards and other customizable products on Zazzle.

Most of the images you'll see here came from Kathmandu, the crazy, busy, crowded, eclectic capital city of Nepal, and Nepal's "second city," Pokhara. I also spent some time in the jungle near a small village known as Shyauli Bazaar in the geographical center of the country, near the Middim Khola (river). 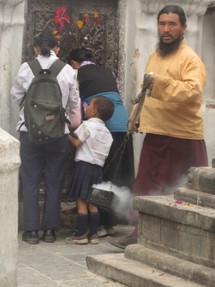 Especially people-pictures. I find people-watching fascinating, no matter where I am, but the people of Nepal were especially interesting to me. As time went on, I became more comfortable with photographing them with my little point-and-shoot Canon Powershot SD1400 IS and a bit better at capturing more of the personality of the country.

My purpose in traveling to Nepal for three months was to do research for a book project (ongoing), but photography became an unexpected "hobby" while I was there. I've been turning some of those photos into things like postcards and notecards and prints, like those you'll see here, all of which and others are available on Zazzle.

Have You Been To Nepal?

Or thinking of going there?

Customizable inside and out

Where These Photos Were Taken

Most of the images you'll see came from Kathmandu, the crazy, busy, crowded, eclectic capital city of Nepal, and Nepal's "second city," Pokhara. I also spent some time in the jungle near a small village known as Shyauli Bazaar in the geographical center of the country, near the Middim Khola (river).

I was in Nepal from the beginning of May through the end of July, during the hot, incredibly humid rainy season, so the amazing, majestic Himalayas were often in the clouds. And even when they weren't, they were so awe-inspiring and my photography skills so lacking, I couldn't adequately photograph them. So I focused instead on the smaller, closer aspects of Nepal.

Featured Photo: A Moment Between Friends 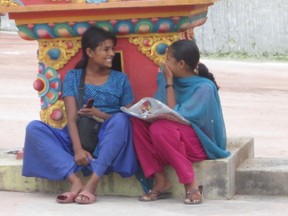 I was at Boudha Stupa -- a stupa is a Buddhist shrine -- in Kathmandu, Nepal, where I spent much of my time while in the city, walking and watching the people practice their religion in various ways, wandering and browsing among the shops surrounding the stupa, dining in the rooftop cafes (still watching people), and observing all the other activities that went on in this popular, busy place, the site of frequent festivals, a number of temples, and tourism.

While walking on one of the upper levels of the huge, round stupa, I spotted these two girls, talking, giggling and nudging one another. I watched them for several minutes, wishing I could have been privy to their private stories and jokes.

See this image on Zazzle

Customizable front and back 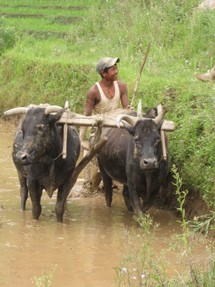 On a terraced hillside overlooking Phewa Lake in Pokhara, Nepal, I came across this smiling young man and his friends, plowing and planting rice. The plantings are staggered, so there's always a new supply. Some of the paddies were vibrant green, in all stages of growth, while others, like this one, were empty and being readied for a new crop.

Those are water buffalo pulling the plow. When not being put to work or on a plate, the mild-mannered water buffalo generally just wander -- in the fields and the streets -- or soak themselves in water holes and oversized puddles.

See this image on Zazzle

See More of My Images and Products on Zazzle

Not just from Nepal

Ramkitten's Adventure Emporium
I've also created products from my photographs from Search and Rescue, flora and fauna, and other travels and adventures. It's a work in progress, so I'll be adding and learning more over time. If there's an image you see but not the product you want to go with it, let me know and I'd be happy to create it for you.

Who I Was With in Nepal

And the reason for my trip 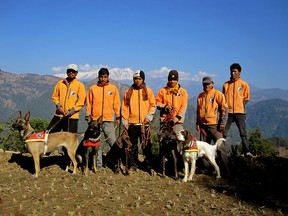 Although you won't see photos of them in my Zazzle store, I spent much of my three months in Nepal with their Search and Rescue team, which is what the book I'm working on will be about -- who they are and their 21-year history, including some of their amazing searches and disaster relief missions in the Himalayas and jungles of Nepal, the special school started by the team's founder, and the challenges and losses the struggling team faced during and after the 10-year Maoist war. Formerly the Himalaya Rescue Dog Squad and now called SAR Dogs Nepal (because they often work with their trained K9 companions), you can learn more about them on their SAR Dogs Nepal website.

*The photo above includes members of the SAR Dogs Nepal Junior Squad and their team leader (far right), along with five of their K9s, some from the United States and some donated from Germany.

This is the Camera I Used (and Continue To)

I've been very happy with the Powershot, which works well even after being dropped way too many times.

The Canon PowerShot SD1400 IS Digital ELPH has a large 2.7-inch LCD screen with excellent  color, resolution and contrast even when viewed at an angle. The screen is very durable with a scratch-resistant, anti-reflective coating. It also features Night Display for easy viewing in low light. With 22 shooting modes, the camera has an Optical Image Stabilizer, which automatically detects and corrects camera shake, one of the leading causes of fuzzy or blurred shots. Even when zoomed in, you can get the steady, crisp images.

You can also record video in 720p high definition (1280 x 720 pixels). The camera makes it easy to enjoy HD movies and still photos on an HDTV with a mini-HDMI connector for direct connection to a high definition TV monitor.

You can't beat the quality for the price with this camera.

Thanks for the really nice comments, everyone. I appreciate you taking the time to visit.

I like so much the photos and I am a big fan of your entire work.

Very nice photos! It looks like you had a great time and are able to relive this trip through your images.

These are stunning photos! I especially like your "featured photo" A Moment Between Friends, and A Morning Chat. I'm glad you gave a camera recommendation too. I'm in the market for a new camera, and will look into this one.

Fantastic photos of such a far away land. (Of course, "far away is only far until you go.") I've never made it to Nepal.

Deb, your pictures are fantastic!

Where To Go and What To See in Nepal

Nepal is a small country, but the list of tourist places to see are not. Here...

Best things to do in Battambang, Cambodia

Find out why Battambang is one of Cambodia's fastest growing tourist destinat... 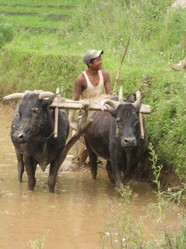 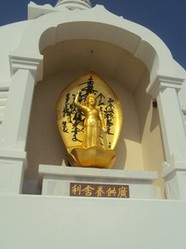 Where To Go and What To See in Nepal

Nepal is a small country, but the list of tourist places to see are not. Here is your travel guide to this Asian country.
100%  8   8 Meagan
Cambodia 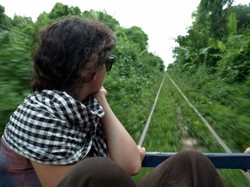 Best things to do in Battambang, Cambodia

Find out why Battambang is one of Cambodia's fastest growing tourist destinations. This insider's guide shares the very best things to see and do while in town.
Loading ...
Error!