The Inevitability of Progress

History repeats itself, so it should be no surprise that turmoil, such as the turmoil prevalent within our country now, brings on change.

Some People Don't Know This

Progress Can Only be Born From Change

If history can prove anything, it’s that things change, and often for the better. Make no mistake, however, that change may be slow and costly, but change is inevitable. I see that today in so many different forms but the one most prominent in my mind is that of the chokehold that Christianity has on Americans.

If we look back at the history of the world we will notice eras of stability with little change. Some might mistake this as a time of prosperity. Little change means everyone is in agreement, right? If everyone agrees, peace is prevalent and all is well, but on the contrary, these times of little or no change just signify an imbalance. Those with power have subdued those who oppose power in any way, shape or form.

The Romanticization of an Ideology

The times with the most change are turbulent times so naturally, those changes are equated with negatives. For example, before World War I there was this romanticism about soldiers going to war to defend their country. It was considered an honor and brave. This was an unchallenged mindset prevalent throughout, not only the United States, but through most of the world. The grim reality of war in this, the first “machine war,” was undeniable, however, and ever since, war has lost its appeal. It’s not as romantic now to go off to die for your country. It’s seen as ludicrous by some, by others it’s just another example of those in power using those without power, and while those who are happy to go fight wars for their country still exist, they are increasingly in the minority. I don’t think anyone is ever “happy” about going to war except the profiteers.

Why this example? Well, as I stated before, I see Christianity as the ultimate example of the inevitability of progress because of the romanticized mindset it has successfully, until recently, had on most Americans. Christianity has been successful in manipulating the masses by brainwashing them into believing that things like love, forgiveness, compassion, and tolerance are strictly virtues of this particular religion. Anyone who has read the bible, the very foundation upon which this religion has been built, knows that love, forgiveness, compassion, and tolerance are undeniably absent from this book. If one is to take the virtues of the bible as the basis of Christianity then homophobia, racism, genocide, incest, intolerance, misogyny, human ownership, murder and rape are the only virtues Christianity has a claim to. And oddly enough, anyone who takes a stroll through history without the Christian re-editing can see that they are rightly so.

Choose Not to Conform

The Death of an Ideal

This brings me to the inevitable progress I was speaking of. Why am I even so bold as to write an article questioning this religion which is still practiced by a great majority of the country? Because these are the turbulent times I was speaking of when change occurs. Conformity to the accepted norms is not in the best interest of society as a whole. While a majority still clings to this archaic mindset and will defend it—it is a dying ideology. The proof that it is dying is in the desperate attempt to maintain followers by the people in power.

In no other time in history has religion had such an importance in politics as it does now. Almost every contender for the presidential election right now has some “Christian take” on issues that have little, if anything at all, to do with religion. And the fact that people fall for this obvious distraction is unsettling, but it is also just the right amount of appalling behavior to set off this chain of events that will ultimately end with the death of Christianity as currency for a deluded few and a replacement of rational thought for the deluded masses.

Conformity Can Only Be Maintained For So Long

Now, I’m not saying that religion, or Christianity specifically is to blame for the conformity that has kept this country behind the times when compared to other countries like Japan or Sweden. I am saying, however, that Christianity seems to be the scapegoat to justify the roadblocks to progress, such as denying a person the right to marry despite his sexual preference or orientation, or Congress wasting more time on what a woman can or can’t do with her body when half of America is either homeless or jobless. This shouldn’t even be an issue but every good politician knows the way to make it an issue is by making it a religious one—and apparently, the freedom of religion that this country touts as such a basic and moral right, is only a right if that religion is Christianity.

Books on How the World Works

Some Other Ways to Bring About Change

How to Divorce Your Cable Company and Not Look Back

This can get a little messy. Do you reject Christian values, or just the blind adherence to faith that can result in slowing progress (which can result in inhuman activity)?
If you don't reject Christian values outright, maybe something good can come from religion?
There are zealots in all camps, even in the Humanist movement. I think that once you think you have the answer, you are about to find out you don't. 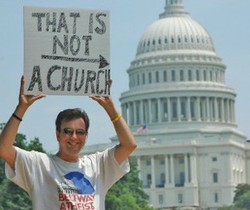