A look at the fiction in issue 245 of the long-running science-fiction and fantasy magazine Interzone.

Chris Butler, Melanie Tem, Carlos Hernandez, Damien Walters and Antony Mann are the authors whose short stories are featured in the March-April 2013 issue of science-fiction and fantasy magazine Interzone. The excellent cover picture is by Jim Burns.
The stories this issue cover a variety of themes from tree magic to panda sex, from political satire to the risks of using magic, even to cheer up a sick little girl.

Steam punk meets fantasy in the delightful cover picture on issue 245 of science-fiction and fantasy magazine Interzone (number 245, TTA Press, ISSN 0264-3596). Artist Jim Burns’ creation goes under the name “Homuncularium” and I’m sure there will be demand for prints.

The fiction magazine starts with the regular entertaining column by David Langford, before sobering up the readers with the obituaries. Gerry Anderson of Stingray and Thunderbirds fame and dalek designer Ray Cusick are among those listed.

But Interzone is about the fiction, and there are five stories in this issue, by Chris Butler, Melanie Tem, Carlos Hernandez, Damien Walters and Antony Mann, with subjects ranging from tree magic to panda sex.

“The Animator” by Chris Butler

To win the hand of Eleanor, clock-making apprentice Powell has to impress the duke, so he extrapolates from his toy animation machine to a device that projects moving images onto the wall of a local café, much to the delight of the owner as it rapidly increases his business. But those in authority fear this could be some kind of theatre, where people could gather and share their spores and thus sew the seeds of revolution. This is Chris’ second Interzone story in the spore universe and combines humour, such as blocking off the gap under the door to stop spores escaping while having sex, to a serious political satire on how the ruling class fear workers gathering. The combination works well, and is a worthy opener to this issue’s fiction.

I found this story extremely hard to get into, and I have to confess that I still do not really understand it. There are good bits as the first person (or whatever he/she is) describes experiences and talks about memory. There is violence; violence is important though I’m not sure why. I guess I’ll have to leave others to work that out, as I’m afraid I couldn’t.

But in order to be fair, and just in case I wasn’t in a receptive mood when I first read it, I tried to read it again after finishing the rest of the magazine, but this time I couldn’t even get to the end. I guess the author and I are not even close to being on the same wavelength.

“The International Studbook of the Giant Panda” by Carlos Hernandez

This is ridiculous, but fun nonetheless. What better way to teach pandas to mate than to have humans in panda suits (using virtual reality and remote control) to show them how it is done? And even, if the mood is right, engage sexually with them. Journalist Gabby is taken to the panda mission to try it out for herself. But there are anti-bestiality terrorists afoot and a real panda that fancies her like crazy. I’m still smiling.

Wartime, in occupied Lithuania a frightened magician tries to protect himself and his sick daughter from the Russian soldiers. Using magic can help the little girl feel better in her final days, but every use of magic risks attracting the attention of the soldiers. This story is both sad and beautiful, a tale dripping with emotion and despair.

“The Face Tree” by Antony Mann

This story had me gripped from start to finish, despite seeing the ending a mile off. The journey was what mattered, the journey of Stephen Davison on a path to self destruction, but was the mysterious woman who befriended him by the odd-looking oak tree his saviour or executioner, or maybe both if he’d let her? Underneath the fantasy element of the tale is a vivid description of how British town centres have degenerated, Oxford being the example in this case. Clearly narrated with the gift of a true storyteller, this is this issue’s best by far.

Doctor Who writer Paul Cornell comes under the spotlight for this issue’s interview, thanks to his new novel London Falling, which combines a crime story with the occult. He says in the interview that he has returned to the style of writing that he used in his early Doctor Who books.

The magazine finishes, as usual, with a collection of book, film and DVD reviews.

SteveRogerson, Thank you for practical information, pretty pictures and product lines.
In particular, your write-ups of Animator, Face Tree and Paskutinis Iliuzija intrigue me.

What was odd about the oak tree in Face Tree?

I found that Paul Cornell comment interesting too. Made me keen to read the book - I loved his Doctor Who novels. 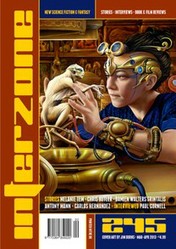