“The Pursuit of the Whole is called Love” by LS Johnson

When a battle robot goes insane, what better way to check it out than with a human psychiatrist who is overflowing with his own problems? The result is both humorous (the comparison between software encryption routines and human bouncers is particularly notable) and sad, and a little scary. The story was runner-up in this year’s James White Award.

“Just as Good” by Jacob A Boyd

Swapshop gone mad. In this world, everything is exchangeable, whether you want to exchange it or not. All of which is pretty confusing for the young girl who acts as narrator. The Exchanger takes her property and even her mother (but gives her a new one), and sets her tests. An intriguing tale that will leave you wanting more, such as an explanation. Then again, sometimes it is better not to know.

Ever looked down from an airplane window at the clouds and imagined them to be solid? In Ahren’s world they are, mostly, and it is his job to map them, to find the solid routes for his bosses to exploit while at the same time avoiding falling through weak clouds to the ground below. There are other dangers, such as rain that can cause a cloud slide. And then he discovers that someone else is up there with him. This is a compelling tale of an explorer, what drives him, what haunts him. Excellent.

“Futile the Winds” by Rebecca Schwarz

A touching tale of two people trying to survive on the harsh surface of Mars, the story starts with a sliver of hope in a world of despair. Their efforts to grow plants and thus food had become ever harder, but could there be one last plant? Well, yes, but not quite what they imagined. A short but nice journey from the scientific to the bizarre.

A wonderful painting by Richard Wagner of a frog illustrates this final story. This is about a bet, a confident bet by a confident man that he could still run his company as a frog. Joel takes him up on it. Now he sits in a pond watching his daughter run his company, but the bet does allow a way out. He could take it but there was another option and that was to use his access to the company computer to protect his daughter, but it would mean he stayed as a frog. This is a very silly story, but enjoyable and funny.

There has been a change at the beginning of the book in that David Langford’s Ansible Link column and the obituaries take up the first three pages, ahead of the contents. This seems an odd decision; surely most readers want to see the contents first. Talking of the obituaries, the big names this issue are Iain M Banks, a brilliant writer taken from us much too soon, Ray Harryhausen, the film director famous for his stop-motion animation, and Jack Vance, accurately described as “one of the revered Great Old Ones of SF”.

There is no interview this issue but a long book review section covering 15 books from novels to short-story collections to science, or rather volume four of The Science of Discworld. Sadly, the reviews are again interrupted by a two-page essay from Jonathan McCalmont. This is the second of his essays (the first was in issue 246) and it is no less boring; congratulations to anyone who makes it to the end.

Tony Lee’s Bluray and DVD reviews include a chance to win one of five Bluray copies of Cloud Atlas. And the issue ends with Nick Lowe’s look at recent film releases – Man of Steel and Star Trek Into Darkness stand out, but Byzantium looks interesting.

Who won the James White Award that year? 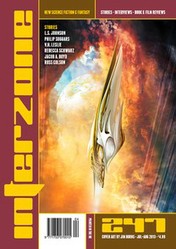