Steve Rogerson reviews the fiction and the rest is issue 248 (September-October 2013) of science-fiction and fantasy magazine Interzone.

Carole Johnstone, Greg Kurzawa, James van Pelt, Ken Altabef and Sean McMullen are the writers of the five short stories that provide the backbone of issue 248 of Interzone. The September-October 2013 issue also has the usual mix of obituaries, book reviews, DVD reviews and film reviews, plus an interview with author Christopher Priest.

The fiction in issue 248 of science-fiction and fantasy magazine Interzone (number 248, TTA Press, ISSN 0264-3596) provided an interesting mix. None stands out, but that is because all five were of a very high level. And there was a good blend of solid science fiction, fantasy and even horror.

The boredom of long-distance space travel is hurting this couple; even the regular sex isn’t providing the distraction it once did. She is the narrator and he is going mad, or is it the other way round? Vividly told, you can feel the growing despair, the anguish and a little bit of the truth they pretended they didn’t know.

Nothing happens in this story. There is no plot, little dialogue and a lot of description. It’s brilliant. The school continues from the past, growing as the world turns around it, through the modern day and to the future, and on. There is something strange about the school, pictures change, rabbits visit, children learn. Lessons move with the times, modern teaching aids replace old ones, but the essence of the school stays the same. But what is the essence?

A stage magician makes a mannequin apparently perform unassisted. But when Sam buys the magician’s repossessed house he discovers secrets that suggest the stage act was more than it seemed. The boundary between fantasy and horror is often blurred, and many stories fit easily into both. This is one, and that is no bad thing. It would actually work well filmed as an episode of Outer Limits or Twilight Zone. Martin Hanford’s illustration for this story was my favourite in the magazine.

The theatre is closing, the world has changed and all the old man has left are his memories and a pair of opera glasses that lets him see back in time. This very short story is full of sadness, full of the regrets of age, but strangely comforting.

Set in 1875, this is the story of a clever technician whose worth was spotted by a rich man determined to make a predictive calculating machine. He jumps at the opportunity, which leads him to meet an American typist with whom he falls in love. All good so far, but the lengths the owner will go to protect the project are beyond reasonable and a received message reveals another project working on similar lines. This is a damn fine yarn, with a writing style that keeps the reader immersed. There are also unpredictable twists and a cracking ending.

Assistant fiction editor Andy Hedgecock’s opening editorial provides a glimpse of what he looks for when sifting through the submissions – he likes to be lured into the hazardous waters of imagination, prophesy and astonishment. Don’t we all. After David Langford’s entertaining Ansible Link column, the obituaries this month thankfully contain no names of people I’ve met; the most famous listed of the recently deceased was author Frederik Pohl.

Having only ever read one Christopher Priest novel, I was not expecting to get much from this issue’s main interview, but was pleasantly surprised by this brief insight into how he researches his novels and the influences on them. This was all linked to a review of his latest novel, The Adjacent, one of thirteen book reviews. Though the reviews are all well written, none have me dashing to the bookshop to place an order. In fairness, three seemed a little intriguing – Theatre of the Gods by M Suddain, Invocation by Jo L Walton and Ectopia by Martin Goodman.

I must confess I was tempted to skip Jonathan McCalmont’s Future Interrupted column, but having promised this time to explain more my dislike of them, I took a deep breath and read. This is his third column, and I found it no better than the first two. The difficulty I have in explaining why is that I am not sure of their purpose. Most columns aim to be entertaining, informative or thought provoking. This fails on all three, so what’s it for? Why is Interzone determined to fill two precious pages with rambling each issue? Maybe if the editor could answer those questions, I may be in a better position to say whether it achieves its objectives.

That said, McCalmont did manage to raise one smile on my face when he asked what if the red shirts in Star Trek became aware that the show’s writers were trying to kill them. But one mildly amusing sentence in six pages over three issues is just not good enough. Meanwhile, the most depressing part of the column came in the final sentence when he referred to “the next few columns”. Please, no.

The issue finishes up with the usual selection of film and DVD reviews; The World’s End sounds worth seeing, but reading Tony Lee’s views on season one of Defiance would put off new viewers. That would be a shame, because what Lee found dull, I found gripping, and dripping with originality; one of the best new television shows for a while.

Lee was also a little cruel on Tom Cruise, but I can see his point, though I’ll probably try to catch Oblivion on TV at some point.

SteveRogerson, Thank you for practical information, pretty pictures and product lines.
It's understandable why you'd find it difficult to separate one, two, three out from the others. But Il teatro oscuro stands out with the Spanish title and the write-up.

Would it have that title -- which I like, because it makes me think of something Mario Vargas Llosa would chose -- because of peninsular Spanish influences on the plot or protagonist? 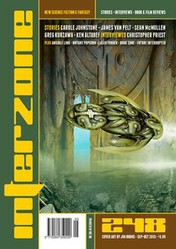