The November-December 2013 issue of Interzone mixes science-fiction, fantasy and horror in its six short stories. Steve Rogerson reviews the selection.

Tim Lees, Jason Sanford, Lavie Tidhar, Claire Humphrey, John Shirley and Sarah Brooks provide the fiction in issue 249 of science-fiction and fantasy magazine Interzone. John Shirley is also interviewed as part of the book review section, the latest films and DVDs are put under the spotlight, and David Langford provides his regular dose of humour.

The fiction in issue 249 of science-fiction and fantasy magazine Interzone (number 248, TTA Press, ISSN 0264-3596) is a mixed bunch, with the horror train journey of “Trans-Siberia: An Account of a Journey” standing out. “Paprika” left haunting thoughts in my mind, and these two stories alone make this issue more than worthwhile. And that is not to downplay the other four tales, which could easily all be best in a different issue. That train ride though was something else.

Girl grows up in a cult, runs away, meets boy. Cult finds her, takes her back, boy searches. That’s it really, told from the boy’s perspective, and very well told at that. Not sure why it is SF&F; there are some unexplained events, such as the star, but nothing that is unexplainable without delving into fantasy or science fiction.

Paprika is a time angel, storing the selves of those who have gone before while helping Satoshi recreate people’s favourite toys from the past. But the humans are dying out and the other time angels are angry at Paprika’s questioning of her programming. This is a beautiful story that wonderfully captures the angel’s unspoken love for the toy maker, and a fitting tribute to anime director Satoshi Kon who died in 2010.

A robot priest contemplates reality as it gives a sermon to a congregation comprised partly of household appliances. That is enough to make this story worth reading, but the whole is more a philosophical question on both faith and reality, expertly told with more than a hint of humour.

Alekra is a duellist, or rather was until she was careless one day. Now she runs a school for duellists, but there is nobody to teach, scared away by the ghosts of dead former pupils; she has to sell her fingers as spares for other duellists to keep the school alive. But what happens if she runs out of fingers? Her new sponsor Ado Solomon could provide the answer, but what about the ghosts? A curious tale, simultaneously sad and hopeful, and definitely a little different.

“The Kindest Man in Stormland” by John Shirley

Webb has the job of extracting a serial killer from Stormland, an area ravaged for years by storms and now home to an almost lawless community of refugees. But the man he finds isn’t what he expected, and there is another man who is a slightly bigger problem. Apart from some unsubtle and unnecessary climate-change propaganda, this is a good tale with a couple of nice twists.

“Trans-Siberia: An Account of a Journey” by Sarah Brooks

Gulou Wu meets the intriguing Elena on his week-long train journey from Beijing to Moscow. But when he sketches her, the beautiful face turns to something horrid. But which is real? Maybe neither. This was definitely a case of saving the best for last: A chilling horror story told through the eyes of a naïve young man left haunted by his journey.

The issue kicks off with some justifiable gloating as Interzone won the best magazine category in this year’s British Fantasy Awards. There were also some individual winners and nominees in other categories, notably from Interzone’s sister magazine Black Static. The full list of winners can be found three pages on in David Langford’s Ansible Link column. I can’t help wonder if some journalists and critics now deliberately have a dig at SF in the hope of a mention by Langford; maybe they’re running a secret competition.

Author John Shirley is interviewed as part of the review of his book New Taboos Plus. Some interesting political views here but having never read any of his work (apart from the story in this issue), some of this went over my head. A quick scan of the book reviews failed to excite me and so onto Jonathan McCalmont’s column. If I wasn’t reviewing Interzone, I’d probably by now have stopped reading his pages, but having been so negative about his earlier pieces I feel obliged to read in search of improvement, and improvement there was. His writing style seems to have evolved into something a little less boring and parts of this look at the culture of comics was, dare I say it, actually interesting. Please continue getting better.

Nick Lowe’s Mutual Popcorn starts with a review of Thor: The Dark World, already on my must-see list; the rest of the films fall into the “I might watch them on telly if I have nothing better to do” category. The review of How I Live Now though did lead to me ordering Meg Rosoff’s original novel; if I like that I may watch the film.

What I have been enjoying on telly is Under the Dome, and Tony Lee’s review of the DVD release was a pretty accurate summing up of the first series, though I couldn’t actually work out whether or not he liked it.

SteveRogerson, Thank you for product lines, pretty pictures and practical information.
All the stories catch my attention even as Paprika and Trans-Siberia stand out a bit more.

Do people not need priests in Filaments? What is it about the star in Unknown Cities of America? 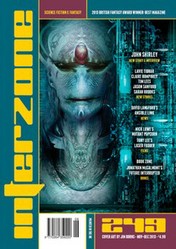