Is Cross Pollination Possible Between Watermelons And Cantaloupes?

If you grow watermelons and cantaloupes, you may have at one time wondered if the two plants can cross pollinate with one another, well the answer is simple and explained here.

Watermelons and cantaloupes are two delicious summer fruits that are especially popular in warmer climate regions.  The two fruits are grown in the warmer months of the year in gardens and farms throughout much of the world.  If you grow these wonderful Cucurbits, have you ever considered the possibility that the two may cross pollinate?  The fact is both cantaloupes and watermelons are members of the Cucurbitaceae family, the same family to which pumpkins, squash, gourds, and cucumbers belong to.  Just like the other Cucurbits, watermelons and cantaloupes, love full sun, and grow very large vines.  Both fruit variety types usually produce both male and female flowers and are typically pollinated by bees which transfer pollen from male to female flowers.  This pollination process is a necessary function to produce cantaloupe and watermelon fruits and without it you would not be able to grow yourself or buy these fruits in the grocery store.

Is possible though for these two fruit types to cross pollinate with one another and produce a hybrid fruit that tastes like watermelon and cantaloupe or some combination thereof? Well, if cross pollination did occur, you would not be able to tell with the fruit but only if you planted from the seeds produced in the fruit from the pollination.  If this were not the case you would probably find a good bit of this cross pollinated fruit each growing season simply because as fruit grown on a massive scale like this is pollinated by bees, the potential for cross pollination from neighboring crops is huge.  Providing proper crop spacing and isolation for pollination that allows no crossing would be difficult, but thankfully, if crossing does occur it occurs in the next generation.

Now whether or not cross pollination occurs is a concern held primarily by those who save the seeds to plant with in future growing seasons.  So can watermelons and cantaloupes cross pollinate? No.  The fruit varieties are similar and different in many ways and are just too genetically dissimilar to cross pollinate with one another.  Watermelons are members of the Citrullus genus and C. Lanatus species. Cantaloupes belong to the Cucumis genus and the C. Melo species.  Interestingly enough, cantaloupes are actually more closely related to cucumbers as the two are in the same genus group.

So, as gardener, you can put to rest any concerns you may have about growing watermelons along side cantaloupes and the possibility of cross pollination.  The two plant types will not and cannot cross with one another.  As long as you or a close by neighbor is not planting another variety of watermelon or cantaloupe (in addition to the variety of each you are growing) you would not expect to have too much concern that cross pollination would alter the genetics of your true to type seed.  Cross pollination can happen between varieties in the same species (and sometimes genus) for cucurbits but geographic isolation and staggered planting timing can greatly reduce the chances.

This article has been published on http://wizzley.com/, and its author, CEdward, does not permit it to be republished elsewhere.  Links are appreciated, but no copying.

Cross Pollination Between Cucumbers And Summer Squash
If you’re a gardener, you may wonder if cucumbers and summer squash can actually cross pollinate. Well, the answer is simple but requires a little bit of explanation.

Cross Pollination Between Pumpkins And Gourds
Can pumpkins actually cross pollinate with gourds? The answer is not so simple but is important to answer if you grow pumpkins together with gourds and save the seeds.
Can Pumpkins Cross Pollinate With Squashes?
Do you grow pumpkins and squashes and have you thought about the possibility that the two could cross pollinate with one other? It’s a valid concern and it’s discussed here.
Updated: 08/25/2012, CEdward
Thank you! Would you like to post a comment now?
1

While both are in the cucurbit family, water melon is in the genus Citrullus and canteloupe is in the genus Cucumis. You can have hybrids between two different genera in the same family, if they are closely related, but I suggest that it is highly unlikely that any seed produced by these hybrids would be fertile.

I am sorry but I definitely disagree! In my garden this year, I have 2 viable watermelon / cantalope hybrids growing on my cantalope plant! 2 Hybrids that were growing on the watermelon vine did not thrive. This is both first generation. Happy to send you photos should you be interested. 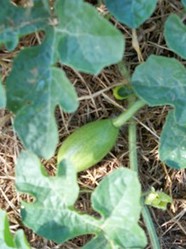