The artist, J M W Turner, was fascinated by the science of light and colour. The theories of Geothe and Newton resulted in one of his most innovative images.

Towards the end of his career Turner became intrigued by Johann Wolfgang von Goethe’s book, 'Zur Farbenlehre', translated as 'Theory of Colours', and published in 1840. Goethe’s book was a critique of Isaac Newton’s theory of light and colour as outlined in his book, 'Opticks'.

Turner’s explicit response to Goethe’s Theory of Colours was the painting: 'Light and Colour (Goethe’s Theory) – The Morning After the Deluge'.

Before Isaac Newton began his groundbreaking work on light and colour, it had been assumed that colour was the attribute of an object, that is the colour was thought to be  transmitted from the object itself  to the eye of the beholder. Because the colour was received by the eye of an individual person, Goethe's theory was subjective, that is it depended on personal traits of the individual viewer.

In contrast,  Newton perceived  that when he shone a beam of white light  through a prism, (not looking through the prism himself)  it split into  seven  colours,  producing rays of different bendable qualities. Therefore, he deduced that  white light was not of a uniform composition throughout but was formed of different colours and elements.  Newton's theory was objective.

Pink Floyd's Famous LP Cover - Dark Side of the Moon

Unlike Newton, Goethe believed that light was homogenous, that is all of a piece, not split. As a Romantic, Goethe accused the rationalist Newton of destroying the harmonious nature of light. He felt Newton was disregarding the human, emotional  aspect of observation, reducing everything to a mathematical formula. Of course, as a scientist, this is exactly what Newton was doing. It was good scientific practice.

But Goethe  could not accept Newton’s concept that the eye was a passive recipient of light, believing that the eye  generated its own internal lighting and colour effects.  He maintained that the spots of colour that appeared  to a person after directly staring at the sun were proof of this. We can see that Goethe's theory was based on the Romantic ideal of the harmony and power of nature resulting in the emotional impact of light on the eye of the individual.

Nowadays we can accept that Newton's scientific theory and Goethe's Romantic philosophical ideal both have their place.

Goethe and Newton - On Colour and Light Theory

Goethe’s Experiments with Light and Colour

Goethe In His Study

Goethe believed that colours aroused emotions in the viewer, a theory which was (and still is)  very attractive to artists.  He  argued that blues, purples and blue-greens were ‘minus’  colours, associated with restlessness and  anxiety.  The ‘plus’ colours included yellow and red-yellow,  which Goethe felt were positive and life-enhancing.

In fact, as we have already noted, both theories have their value. As individuals we can follow Goethe in that we  each perceive colour in our own individual way and it affects us emotionally, yet from the objective scientific view Newton’s theory of light being split explains the origins of that light.

Turners painting, with it's long explicit title:  Light and Colour (Goethe’s Theory) – The Morning After the Deluge – Moses Writing the Book of Genesis  makes a direct reference to Goethe’s book.    The rich yellow which dominates the painting is one of Goethe’s ‘plus’   colours,  representing optimism and a new beginning.

Many of Turner’s paintings are dominated by the sun but in this particular image there is a merging of the eye and the sun.  Unlike   classical works, this image is  without  viewpoint or  horizon  and lacks  a direct light source.  In this sense it is more of an ‘impression’. The eye and the sun are fused.  Reality is formed by the viewer instead of   being an external vision presented from a distance.

Such a change in the concept of reality   led many of Turner’s critics to accuse him of being completely mad.

But Turner also appears to acknowledge the scientific rationalism of Newton in this work, too.

In his Opticks, Newton discusses bubbles and the rainbow.

In the  title of Turner's work are included the words, Light and Colour,  there is the presence of a  rainbow, and there are  lines of poetry by Turner that accompany the picture which refer to prismatic bubbles,  ‘emulous of light’.

All these factors  would seem to acknowledge Turner’s acceptance of Newton’s theory.

Room for Both Theories today...

Goethe’s theory was never popular  in England. The Industrial Revolution was in full swing and science was flourishing.  As a German Romantic, however,  we can sympathise with Goethe's rejection of Newton’s  rational method.

Today we can see both points of view - colour does affect us emotionally and spiritually and can be an individual reaction although culturally anchored in our particular environment.  But we can also acknowledge the science behind those colours.  How they are produced does not alter our opinion of them, unlike Goethe who was affronted by Newton's purely scientific approach.

Turner was Open to All Ideas

He relished the industrial age!

Turner, a man who embraced scientific discoveries of the industrial age with enthusiasm, appears to have acknowledged aspects of both Newton and Goethe  in his complimentary paintings.   Perhaps, whilst embracing Newton’s theory of light and colour he has, at the same time, paid homage to Goethe’s idea  that colour evokes an emotional response.

Despite the taunts of his critics, Turner  was open to  many scientific and cultural influences.  The impact of his resulting  images had  a profound impact on French Impressionism,  and Turner’s influence on contemporary art today is  immeasurable.

I absolutely agree. Today we can appreciate both aspects of considering light, the emotional and the scientific. Thanks for your really interesting comment.

Science is evolving and many things that were not understood correctly are clearly understood today. Goethe's views might not be scientific but we know that the different spectrum / frequency of light reflects the mood and disposition in a unique way. That is the reason certain colours are used where we find them today. Hospitals have green curtains and white bed sheets, house walls are colored in lighter shades to reflect light, wedding dress is white whereas mourning dress is black. Each colour has its importance and there is a story and reason behind it. I personally feel the world is brighter and beautiful because of the rainbow colours.

VioletteRose, thank you, so glad you enjoyed it. I didn't find it easy, I have to admit! :)

Love the topic on light and colors. Newton is right about his theory of diffraction of composite white light based on the wavelengths and frequencies of different colors. And Goethe is right about the emotional impact different colors may have on people. Colors and light always fascinates me. Thanks for writing this! 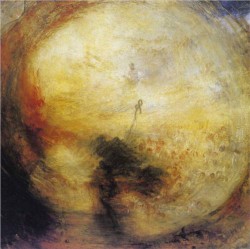 Monet's paintings of the River Thames tried to capture the fleeting effects of fog and mist on London's commercial and industrial watery highway.
61%  8   5 KathleenDuffy
Famous Painters