Read to find out how the British tea planter James Taylor helped in the creation of Ceylon Tea.

In 1852 a British tea planter by the name of James Taylor arrived in Sri Lanka.

15 years later in 1867 he introduced tea plantations to the tiny island when he opened the first tea plantation in Kandy called Loolecondera Estate. It was these tea plantations that began producing one of the finest teas in the island known as Ceylon tea.

James Taylor not only paved the way for more tea plantations to be established but also better roads, railroads, beautiful mansions called bungalows and tea factories to be constructed in isolated areas of the country normally covered in forests and waterfalls.

It was also through James Taylor the exporting of pure Ceylon tea to countries outside of Sri Lanka was made possible.The country’s first tea shipment was exported to London.

As more tea plantations were established many Sinhalese who lived in these areas refused to work in the plantations which led the British to bring in labor from South India.

These laborers were known as Tamils.

Today the majority of the tea plantation workers consist of Tamils and only a tiny portion are Sinhalese.

With so many tea plantations having been set up in different parts of the island the types of Ceylon teas grown also varied according to the areas the tea plantations were situated in.

4 groups of tea evolved and each group differed from the other through flavor, texture and color when brewed.

What are High-Grown Ceylon Teas?

When brewed the teas produce a golden color and have a strong taste to it when compared to the Mid-Growns and Low-Growns.

What are Mid-Grown Ceylon Teas?

Mid-Grown teas are produced in the Central Highlands like in Kandy. The teas are both rich in flavor and color when brewed.

Low-Grown teas are produced in Galle, Matara and Ratnapura areas. The teas have a dark rich color to it when brewed.

What are Uva Ceylon Teas?

Uva Teas are produced in the Uva Province in areas like Badulla and Bandarawela. When brewed it gives a reddish-brown color and has a delicate smooth taste when compared to the other varieties of Ceylon teas.

Place the tea bag into a cup. Gently fill ¾ of the cup with hot boiling water. Allow to brew for 2 minutes before drinking. If you’re planning to have the tea with milk let it brew for 3-4 minutes. This allows the tea to get a darker color and have a stronger taste.

* To make a pot of tea use 4 tea bags for every quart of water. Place the tea bags in the pot and fill the pot with hot boiling water. Cover with lid and let brew for 2 minutes if you are going to have the tea without milk. Brew for 4-5 minutes if you’re adding milk.

Place the tea leaves in the cup. Gently pour boiling water and fill the cup ¾ way. Allow to brew for 2 minutes. Strain and drink.

*To make a pot of tea put 2 teaspoons of tea leaves into the pot. Fill ¾ of the pot with hot boiling water. Cover with lid and let brew for 3 minutes if you are going to have the tea without milk. Brew for 5 minutes if you’re adding milk.

Read an article about tea in general but with emphasis on tea plantations and... 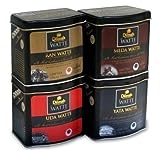 Not really a true tea, Yerba Mate is an infusion made from the yerba mate plant.
100%  14   12 pateluday
Kinds of Tea Read an article about tea in general but with emphasis on tea plantations and cultures in India. Tea is the most popular beverage in India with phenomenal levels of consumption.
Loading ...
Error!