Kimono meaning ‘thing to wear’ is a long sleeved robe which extends down to the dresser’s ankles.

The kimono is Japan’s traditional dress which has been worn by her people for hundreds of years.

The long flowing robe was a popular dress worn as everyday wear by not only the Samurai, but also the Emperor, Empress and many others.

It is still worn by many Japanese and even Sumo wrestlers are usually seen attired in a kimono when they make public appearances.

A deceased person may also be dressed in a kimono before the burial rites are performed on his or her behalf.

A woman will be clothed in a white kimono while men will be garbed in either a suit or kimono.

How is the Japanese Kimono Worn?

Kimonos are worn with the left side placed over the right and then tightened with the obi. The obi is a separate piece of matching fabric wrapped over the kimono around the wearer’s waist and tied at the back.

But when the deceased are dressed in a kimono, the right side is placed over the left.

The type of kimono worn usually reflects the person’s age, marital status and the occasion it’s worn for.

A woman who dons a long sleeved kimono is considered to be single and unmarried.

Kimonos worn for special occasions and official functions are usually made of high quality fabric such as silk with sophisticated and exquisite motifs.

Kimonos worn for regular wear are made of fabric such as cotton and polyester with simple designs.

Kimonos worn by men are different than the ones worn by women.

It has fewer pieces than a woman’s (five pieces whereas a woman’s has twelve and sometimes even more).

The designs are also much simpler and the fabric comes mainly in dark colors e.g. dark blue, brown and green.

But it’s not uncommon to see kimonos with vibrant and colorful shades such as fuchsia on Sumo wrestlers.

There are about eleven different types of kimonos worn by married and unmarried women. The names of these kimonos are:

This kimono with its long wide, flared sleeves and vibrant motifs can be seen on unmarried women at special functions e.g. weddings.

The Hōmongi kimono is worn by both married and single women to weddings and official functions.

These kimonos have dazzling designs which start from the shoulders and trails all the way down to the bottom of the kimono.

The Iromuji kimono is a special dyed silk kimono worn mainly to tea ceremonies by both married and unmarried women and comes in a single shade.

Women who are married or unmarried may wear the Komon kimono for regular wear or official functions.

The motifs of this kimono are of the same pattern.

The Edo komon kimono was mostly worn by the Samurai during the period called 'Edo.'

The Mofuku is a special silk black kimono worn at funerals by both men and women.

This is another kimono similar to the Iromuji kimono which comes in a single shade.

It is worn by married women.

This kimono stands out from the rest because it only has designs below the waistline.

The Kurotomesode Kimono is similar to the Irotomesode kimono since its designs are also only found below the waistline.

This is a black kimono worn by mothers to their daughter or son’s wedding.

The Tsukesage Kimono is a simple patterned kimono worn by married women.

The Uchikake kimono is the official dress of the Japanese bride but may also be worn on stage by actresses.

The silk fabric is woven in gold or silver threads with heavy designs and patterns.

It's much longer than other kimonos and it's not uncommon for a geisha woman to slightly lift the ends of her kimono as she walks to avoid tripping. 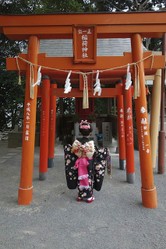 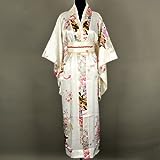