John Martin - Victorian Painter and Printmaker of the Sublime

Inspired by the turbulent times of the Industrial Revolution John Martin was famous for his vast canvases showing humanity dwarfed by the awesome power of wild nature.

John Martin was born of poor Calvinist parents in 1789 at Haydon Bridge, Newcastle upon Tyne, the youngest of twelve children, of whom five survived childhood.

Martin was often confused with his brother, Jonathan, who tried to burn down York Minster.

At school Martin showed little interest in academic subjects, but his teachers recognised his early artistic promise. After leaving school at 14, the family moved to Newcastle. Here Martin's father found him an apprenticeship with a coachbuilder, painting heraldic emblems on coach doors.

But such drudgery and exploitation was intolerable for John Martin and and he freed himself from his indentures.

Martin's life changed drastically when his understanding father  found him a tutor, Boniface Musso, and after a year John followed Musso to London. He worked briefly as a glass painter in the china industry but, eager to begin painting in earnest, he yet again abandoned his 'career'.

Not only did John Martin have a burning ambition and belief in himself as an artist, but In 1809 he had married Susan Garrett, a cultured woman who bore him eight children, of whom six survived.  She was his true soul mate, supporting his ambitions and giving him every encouragement.

Together they would stake their future on the uncertain life of a painter.

His story is typical of the struggling painters of the period. He suffered rejection by the Royal Academy who stated that they didn't have enough room for his large canvases. Martin didn't believe them.   The establishment was not impressed.

However, in 1816 Martin produced Joshua Commanding the Sun to Stand Still, (see above) one of the major paintings that would establish his lasting fame. It was shown at the Royal Academy, in the ante-room, but when exhibited at the British Institution the following year it achieved instant recognition. This was the turning point.

Later he would follow with The Destruction of Sodom and Gomorrah, The Fall of Babylon and his masterwork of 1821, Belshazzar's Feast.

John Martin was a canny artist!  He took advantage of the new technique of etching and turned many of his spectacular paintings into prints.  Now ordinary working class people could have a John Martin on their wall.

He also sent his massive, apocalyptic  paintings around the country where they were popular with the working masses who paid a few pence to go in and see them - often displayed in music halls, theatres  and huge rooms in town halls and similar venues .   Seats were provided so that people could sit and gaze, awestruck at these remarkable works of art. They were lit by flickering candlelight which gave the impression of movement, as if the paintings were alive.

If this reminds you of going to the cinema, then you would be quite right in your thinking.  Film directors,  from DW Griffith to Cecil B DeMille and Roland Emmerich owe an enormous debt to John Martin.

Have a look at this short video of the famous animator, Ray Harryhausen, famed for his 'stop motion' techniques in films such as Jason and the Argonauts - a firm favourite of mine!  He talks about how Martin influenced him.

Martin and his wife opened their home at Allsop Terrace to their friends. What began as chess evenings turned into radical debates on politics, literature and art. These friends were a cross-section of London society, including painter J .W.M. Turner, Mrs. Siddons (the actress), Charles Dickens, Faraday and William Godwin, husband to Mary Wollstonecraft and father to Mary Shelley, to name only a few. 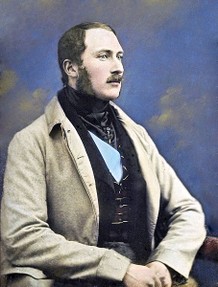 Martin was a Radical, notorious for hissing during the National Anthem, yet this didn't seem to bother Prince Albert who often stopped by Martin’s home on his morning ride.

A believer in a Deity, Martin was nevertheless a staunch supporter of evolutionary science.

Despite his devotion to painting, Martin’s first real love was engineering. He was a man ahead of his times.

A period of near-bankruptcy came about in the 1820s when he failed to realise his far-sighted plans for London’s social improvement. These included a new sewerage system, a Thames Embankment , and an underground railway. In addition, the market was now  flooded with cheap copies of his engravings.  In those days there was no such thing as copyright. He faced financial ruin.

Deeply depressed for months, he rallied and painted a large picture of Queen Victoria’s Coronation. Many famous people were depicted. His finances recovered when these people came to  his studio for sittings, admired his works and ultimately purchased them.

John Martin, Victorian Painter – Influences on His Painting and Printmaking

Martin witnessed the Industrial Revolution, Radical politics and religious and scientific controversy. His huge canvases, with their dream-like, apocalyptic visions reflect the emotional impact of massive social change. Before the terror and grandeur of nature mankind is dwarfed, helpless. This unique interpretation was a break from traditional historical painting. Only Turner was considered his equal.

When Martin brilliantly applied his new engraving technique to Milton’s book Paradise Lost, one inspiration was Brunel’s Thames Tunnel. Likewise the fiery forges of the Black Country provoked Hellish painterly visions. Romantic notions of ‘The Sublime’ were perfectly rendered – a fatalistic fear of the new with exultation in scientific power.

John Martin died in 1854. He was deeply appreciated by the public, but the art establishment never quite trusted him. Although never accepted into the Royal Academy, he was feted by European royalty. Today his reputation has revived and he is regarded as innovative, radical – a Renaissance man whose extraordinary imagination gives an insight into the mindset of a society in transition.

Buy Your Own Victorian Painting

Mira - Thanks for your comments. Yes, I love John Martin.

Interesting article, Kathleen. His life was quite interesting: a Radical, but he painted the coronation of Queen Victoria; a society man, a man involved with the Industrial Revolution, etc. Thank you for sharing!

I'm easily taken in by a good article regarding all things artistic, great article, well done.

Why do Factory Chimneys look like Italian Bell Towers? 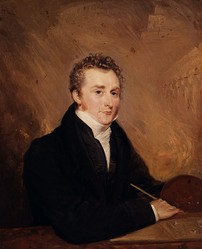 Despite gloomy predictions about the railways, Turner's 'Rain Steam and Speed' used an optimistic, painterly language to depict the new mode of travel.
45%  6   4 KathleenDuffy
Architecture 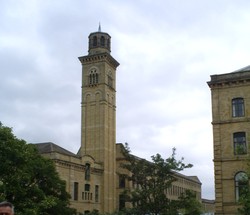 Why do Factory Chimneys look like Italian Bell Towers?

Factory chimneys built during the Industrial Revolution were often designed to emulate the beauty of an Italian Renaissance bell tower. What motivated this trend?
Loading ...
Error!