London’s St Patrick’s Day Parade is a massive party which embraces all sections of the community. This year's theme is 'The World of Dance'!

London is famous for it’s tolerance and diversity, and on St Patrick's Day everyone is Irish! We all come together with banners, marching bands, baton-twirling majorettes, exotic carnival dancers, Irish dancing schools, friends from dozens of community organisations, decorated lorries, dancing nuns, and dozens of Popes (just in case on is needed at the last minute)!

Oh, and this year, there's a special section for families so you can take the kids and join in the parade too! Just turn up on the day and be part of the celebrations.

From Green Park to Trafalgar Square

Each year  tries to be more flamboyant than the last! In 2013 there was a huge, giant inflatable dragon - known as a puca.  It was an  incredible sight at over 36 metres long and 8 metres high.

At noon the dragon, along with lots of singing, dancing, fifes, drums  and general mayhem,  left  the appropriately named 'Green Park'.  Making our way down Oxford Street we marched on to Piccadilly Circus where Eros will wave us through.

Then  we made our noisy way down Lower Regent Street. 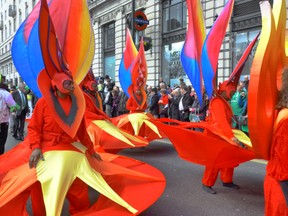 From here we moved down posh Pall Mall, once home to numerous gentlemen's clubs.

Just round the corner from Pall Mall  is Fox of St James, the tobacconist where the great Irish writer, Oscar Wilde, used to buy his tailor-made cigarettes. (Apparently he smoked one hundred a day!).

But we didn't stop to look - we had to get to Trafalgar Square where the party really begins.

Once in Trafalgar Square the entertainment begins and it follows roughly the same pattern each year. From 12 until 6pm there is a free afternoon of Irish cultural events.

You can expect to enjoy:

There may be variations year by year, but basically these are the usual forms of terrific entertainment.

And of course, the people!  Thousands of them - from all over London and beyond, coming together to celebrate 'Irishness' in all its creative forms.

Keep the Party going at The London Irish Centre

The London irish Centre really gets into the swing of things over the St Patrick's Day weekend.  If you fancied getting a good start to your Parade experience, why not pop in for Mass followed by a full Irish breakfast.  In 2012 over 1,500 people went along to the London Irish Centre to join in the celebrations.

For just £10 you can get a weekend pass. Here's what's going on over that weekend - from their website:

Here's a link to their webiste.

So, if you have a great time at the St Patrick's Day Parade, you can carry on your love affair with all things Irish at the London Irish Centre.

KathleenDuffy, Thank you for product lines, pretty pictures and practical information.
Everyone looks so happy to be there, even the men having to carry the banner, pace themselves for those behind and walk nicely -- since they're the first impression that crowds lining the route see -- at the same time!

Was it difficult to move around the parade route, to and from accommodations and to and from eateries and shops?

Yes, I could do - the photos on this article are the ones I took last year!

So that's where the name of Pall Mall cigarettes comes from! :) Pall Mall, the London street.
I plan to have a Guinness in an Irish pub on St. Patrick's Day :)
Maybe you could add to this article some of your photos of the parade after March 17, if you'll be able to attend :) 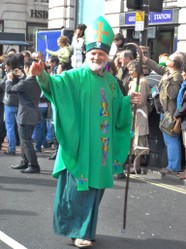 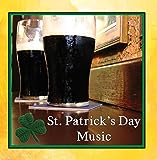 Whether a native Russian or an interested Anglophile, London is home to a number of organisations catering for those who are fascinated by Russian culture.
16%  0   2 KathleenDuffy
Cultural & History Tours