The mangrove forest around the Kalim River in the north-east of the main island of Langkawi, Malaysia, is a World Geopark conservation area. Many tour operators offer a chance for visitors to explore the area by boat taking in such attractions as the cave of bats. There is also the opportunity to watch eagles feeding and learn some of the island's ancient history.

In 2007, the holiday island of Langkawi Permata Kedah off the north-west coast of Malayisa was given a World Geopark status by Unesco. One of the conservation areas is Kilim Karst, the area around the Kilim River in the north-east of the main island. There are three river estuaries and numerous tour operators on the island will offer a river cruise to visit the area’s most popular attractions, including the mangroves, bat cave and eagle feeding zones. Some also venture further to Pulau Anak Tikus (known as Fossil Island) and other nearby sites.

Cave of Bats and Mangroves

The bat cave can only be reached by boat and visitors walk along a wooden platform through the caves to see the Malaysian fruit bats hanging from the ceiling. There are four different varieties. This also offers a good chance to see the mangroves close up. Some of the walk involves stooping quite low to get through the caves, so only take this tour if that is not going to cause problems.

Continuing up the river, the boat takes you through what is known as crocodile cave, but don’t expect to see any crocodiles. You will though see plenty of monkeys on the bank and you will be supplied with food to throw to them. If your boat gets a little too close to the bank, be careful as some of the wilder monkeys may leap onto the deck. More relaxed, a little further on where the river widens, is a chance to watch the eagles for which the island is famous. You will see them swooping down onto the water catching fish.

The next stop is a combined fish farm and floating restaurant. You will watch the handlers feed the fish and maybe even get a chance to hold a puffer fish.

The meal on the floating restaurant was a clear vegetable soup followed by chicken nuggets and rice and finished with fresh fruit. The food was accompanied by orange juice.

After lunch, the boat takes you to a beach that is only reachable by sea. It is a narrow beach where you can enjoy an hour’s swimming in the sea. At some times of the month, this will be missed off the tour as the sea is too high and covers the beach completely.

From there to Pulau Anak Tikus where a wooden walkway allows a chance to see fossils dating back millions of years. The final stop is the hidden lake. You will have to climb 50 steps and go down 85 to discover the salt-water lake, which is tidal. At times of the day it is just a mud bank, but when the tide is in it looks lovely. The tide enters and recedes through a narrow cave at one end.

Most hotels and travel shops along the Cenang and Tengah beaches will sell a Kalim River tour for between RM90 and RM120 (this review is based on one bought from De Baron Holidays). Some may charge an extra RM20 or so if you want picking up at your hotel, but this is often negotiable. The price includes lunch, but be careful as some do not include all the stops listed – ask first. Pick up time is between 9 and 9.45am in a minibus that will take you to the jetty from where the boat leaves. The complete tour from being picked up to dropped off takes about six hours.

The Kalim river is thickly populated by the dense forests, it must be amazing to watch the scenery while traveling in a boat. The caves of bat and the eagles feasting is another attraction why one should visit this beautiful place in Malaysia.

Eating and drinking on Langkawi, Malaysia

A look at a few of the more interesting places to eat and drink on the touris... 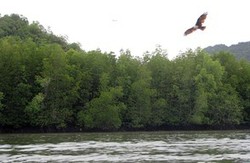 From Geoheritage to Geoparks: Case Studies from Africa and Bey...
47%  2   6 SteveRogerson
Malaysia

Eating and drinking on Langkawi, Malaysia

A look at a few of the more interesting places to eat and drink on the tourist island of Langkawi of the north-west coast of Malaysia.
Loading ...
Error!