Knights of God was a British science-fiction series filmed in 1985 and released two years later. It is set in the year 2019 and shows a Britain that has been devastated by war. The new ruling government is a fascist body adopting pseudo-religious methods to control a rebellious population.

They call themselves the Knights of God and have quelled most of Britain apart from Wales and the strip of land from west to east that comprises Lancashire and Yorkshire. In these parts, armed rebel groups rule and the Knights have failed to conquer. The old Church of England also still exists in a sealed off area around Canterbury.

The Resistance to the Knights of God

Two of the resistance leaders are a man called Arthur (played by Patrick Troughton) and Owen Edwards (played by Gareth Thomas). They refer cryptically to a mysterious destiny for Owen’s son Gervase (played by George Winter) to find the true leader of the people and restore him to power. Owen is helped by his girlfriend Julia Clarke (played by Claire Parker).

Gervase is sent on a mission to seek out the Archbishop of Canterbury who has information to help him find the people’s leader.

The Leadership of the Knights of God

The Knights of God are ruled by Prior Mordrin (played by John Woodvine) but his mental state is brought into question as the series progresses. This is not helped by Brother Hugo (played Julian Fellowes) who is becoming concerned about Modrin’s ability to lead and starts to plot his downfall.

Mordrin meanwhile captures Gervase and with help from his medical officer (played by Michael Sheard) tampers with Gervase’s brain so that if he finds the true leader, he will kill him. Gervase is then released to continue his mission.

Availability of Knights of God

Knights of God comprises 13 episodes, each about 25 minutes long. It was produced by TVS and broadcast once, and only once, in the UK on ITV. It was released in the UK on Betamax but not on VHS or DVD. The dubbed German version was released on VHS in Germany and Denmark.

The show was written by Richard Cooper, who also wrote the novelisation that was released at the same time.

Patrick Troughton is better known for playing the second Doctor in Doctor Who. He died in 1987, before Knights of God was broadcast.

Gareth Thomas has had a number of genre roles, most famously as Roj Blake in Blake’s 7. He has also starred in Children of the Stones and Star Maidens, and had a guest appearance in Torchwood.

Michael Sheard also has many genre credits, notably Section Leader Klegg in the third season of Blake’s 7 and the headmaster in the Doctor Who episode “Remembrance of the Daleks”.

SteveRogerson, Thank you for product lines, pretty pictures and practical information.
Did the series end ambiguously? Or do we know whether Gervase does what he wants to do or what he's forced to do?

It surprises me to see that each episode is not even 25 minutes long. I think of 40, 45 minutes as the shortest an episode on this side of the pond would be.

A look back at the 1976 science-fiction TV show Star Maidens starring Gareth ...

A look back at the 1977 fantasy show Children of the Stones starring Gareth T... 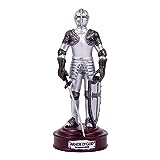 A look back at the 1977 fantasy show Children of the Stones starring Gareth Thomas and Ian Cuthbertson
Loading ...
Error!