Kolkata (formerly Calcutta) has been long the largest city in India and of the historical region of Bengal. It is a commercial and cultural center that merits a visit.

Located on the broad and winding Hooghly River in the Indian state of West Bengal, Kolkata expanded and flowered during the British colonial period. Today it is the business, commercial and financial center of eastern India. It also also known as India's intellectual and cultural center. In this article we will explore some of Kolkata's great tourist attractions.

Kolkata (previously known as Calcutta) is a city located in the Indian state of West Bengal. Until 1911 it was the capital of British India.

The city is located on the broad Hooghly River, which is crossed by the massive cantilever bridge called the Howrah Bridge. This bridge (from Kolkata city on the east bank of the Hooghly to Howrah with its railway station, Howrah Station, on the west bank) is crossed by 100,000 vehicles and 150,000 pedestrians daily, making it the world's busiest cantilever bridge. Opened in 1943, the bridge was constructed without using any nuts and bolts, with the whole structure riveted together instead.

Howrah Station: This railway station was originally built in 1854 and then rebuilt as a distinctive and larger red-brick building and opened to the public in 1905. It is one of four intercity railway stations in the Kolkata metropolis and serves the Eastern Railway and the South Eastern Railway (trains run to thousands of destinations including Mumbai and Delhi). The station is one of the world's largest railway stations with 23 platforms which handle more than 600 trains (carrying one million people) per day. Apart from the platforms, the station contains diesel and electric loco sheds, and carriage sheds, along with waiting and retiring rooms for passengers waiting to join trains.

B.B.D. Bagh (or Dalhousie Square): Back on the eastern side of the Hooghly River, we can visit the square that used to be known as Dalhousie Square (having been name after Lord Dalhousie, a British Governor General of India in the mid-19th century) and which is now named B.B.D. Bagh (after three Indian revolutionary fighters, Benoy Basu, Badal Gupta and Dinesh Gupta). This square is regarded as the heart of Kolkata. The magnificent Greco-Roman style red-brick Writers' Building which used to house all the writers (clerks) administering the British East India Company and later British India may be viewed. It now houses the Secretariat building of the West Bengal state government. In the near vicinity are many important government and private offices, including the G.P.O., the Reserve Bank of India, the High Court and the Lalbazar police headquarters. Nearby elegant boulevards, the Esplanade and the Strand, are worth a stroll.

The Victoria Memorial and the Maidan

Still in central Kolkata, we come across the Maidan, a huge grassy field (originally about five kilometers square) which has been nicknamed the "lungs of Calcutta".

It is the place for sporting meetings -- cricket, football, golf and horse racing all have allocated areas. Political meetings and film festivals take place there. Dotted around the periphery of the Maidan are the neo-classical Raj Bhavan (orignally Government House and now the residence of the Governor of West Bengal), the Shaheed Minar (originally the Octerlony Monument), the Indian Museum, St. Paul's Cathedral, the M. P. Birla Planetarium and the Victoria Memorial.

The Victorial Memorial was inaugurated in 1921 as a memorial to Queen Victoria of the United Kingdom and the Empress of India. It is located on the south end of the Maidan on 64 acres of blooming gardens. The building was built in Indo-Sacarcenic style, which include many Islamic/Mughal and some Hindu architectural elements. The Victoria Memorial design contains an acknowledgement of the Mughal design masterpiece of the Taj Mahal. The Victoria Memorial was even constructed from white marble drawn from the same quarries that supplied the marble for the Taj Mahal.

The Victoria Memorial Hall at Dusk

Moving to south Calcutta, we may view the Kalighat Kali Temple. This temple is dedicated to the Hindu goddess, Kali. Worshippers from all over India come to this temple to present their problems to the goddess for her help.

The Calcutta Botanical Garden (as it is commonly called -- the official name now being the Acharya Jagadish Chandra Bose Indian Botanic Garden) is another place worthy of a visit. It has over 12,000 specimens (including many rare plants and collections of orchids, bamboos, palms and pandanus) and spreads out over 109 acres.

Probably the most popular exhibit is the Great Banyan, a huge banyan tree (Ficus benghalensis) that is claimed to be the largest tree in the world (it is 330 meters in circumference and takes 10 minutes to walk around).

The Calcutta Botanic Garden played a major role in introducing the tea plant from China to the Himalayan and Assam regions of India. From the late 18th century useful and ornamental tropical plants were collected from all over India and then exported to the private and public gardens of other countries.

Kolkata is famous for being India's preeminent intellectual and cultural center. Many great writers, scientists and art film makers have lived and worked in this city. One of the greatest, Rabinranath Tagore, who won the Nobel Prize for Literature in 1913, is commemorated in the Tagore House, the rambling old family mansion where Tagore was born. It is in northern Kolkata, just north of B.B.D. Bagh.

Kolkata on the Internet

Calcutta (Kolkata), India
Interesting article (and map) showing Kolkata (Calcutta) as it was around 1880.

Chennai (Madras): Gateway to South India
Chennai (formerly Madras) is the fourth largest city in India and the capital of the southern Indian state of Tamil Nadu.

Mumbai (Bombay), India: Business and Cinema Powerhouse
Formerly known as Bombay, Mumbai is the business, financial and film making capital of India. Mumbai has long been a crossroads and its streets show a wonderful mix of cultures.

Delhi: India's Capital City
Delhi is northern India's largest city. It comprises Old Delhi, the old Mughal capital of India, and New Delhi, a new area developed by the British and now modern India's capital.
Updated: 01/22/2017, DavidPaulWagner
Thank you! Would you like to post a comment now?
2

I am remember walking across the Howrah Bridge once during peak hour. An experience to remember!

Oh, that bridge looks impressive! Kolkata is place worth of seeing, that is for sure! Thank you for bringing it closer to us! 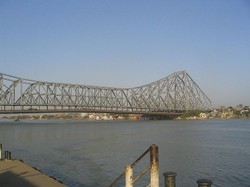