Kung Fu Panda Action Figures are a great hit amongst kids - both boys as well as girls. No matter which figure you're in search of, I've found the best looking and affordable ones.

The Kung Fu Panda is a great inspiration for small kids as the fat Panda that Po is, he managed to learn Kung Fu - that shows his determination and perseverance.

He stands no where near Tai Lung the step son of Master Shifu in battle - after all, he knew the Nerve attack and always had dreams of being the Dragon Warrior. But, Po who was titled the Dragon Warrior (Which no one accepted initially) went on to defeat Tai Lung after Master Tigress' attempt failed.

So, this shows determination and perseverance could win you any battle and it's important that kids learn it when they're young - these action figures may just be figures; but, they're also reminders of this great moral.

Po Action Figure along with the Rhino Warrior

This figure isn't something that older kids will like, it would be suitable for ages 4 - 6 as they're basically fixed figures and can't do much. You'd find Po with his staff and the Rhino Commander.

Here Po fights the mighty Wolf Boss and these figures are pretty neat - in a sense that they're crafted well. Kids of ages up to 8 would find these enjoyable. They come along with movable arms.

If you're looking for something for kids above the age of 7, this is a great buy! It's an electronic Po and has sounds and sensors that complement the various Kung Fu Movements. It's capable of quick draw nunchucks as well as the round house kick moves. To make it seem more real, the voice of this Po is a ditto of Jack Plack the person who acted as Po!

Po Action Figure - I'm ready to take you on!

All kids above the age of 3 would enjoy playing with this Po Action figure. It's neat and enjoyable. You may wonder what makes it so special - it's the amazing belt! When your child presses the button on this Po's belt s/he would hear cool sound effects. In addition to the neat belt, the arms as well as legs are movable.

Po Action Figure - Smack me to hear me

Kids love smacking things around right? If that's the case with your child, they'd surely enjoy this toy. All they need to do is shake or give it a smack and they'd hear preset phrases and sound effects from Po - exciting isn't it?

This is a huge toy and it need not be just for kids. It would be a great fashion accessory to your home. It's around 16 inches tall and has all the features that you need. Press his belly and he'd talk for you. You could squeeze him and wrestle with him and you'd hear the right sounds such as tumbles, tackles and even twists. It's electronic and needs around 3 AA batteries to run, the first time they're provided.

Po and Rhino is a set wherein you receive two separate action figures of Po as well as the Rhino warrior and your child can make them fight! There are small parts and not advisable for younger children.

If you're in search of the bravest Kung Fu Panda Action Figures, master tigress is whom you need!

Master Tigress wears a belt that has a button which when pressed creates sound effects and a few phrases. The arms and legs are movable and kids of all ages would love her.

Here you'd receive an action figure of Master Tigress as well as the Gorilla warrior. Your child can help the tigress defeat the Gorilla! Both the figures come along with movable arms and legs so it's fun for kids of all ages.

Master Tigress Action Figure - Smack me to hear me

If you're in search of a talking tigress, this toy would be the best option, it's cheap and cool. Shake it or smack it and you'd hear Phrases from the movie, so it's a great toy for children below 10 years of age.

Among the Kung Fu Action Figures, Tai Lung is one of the prominent figures as he's the step son of Master Shifu

Tai Lung Action Figure - Touch me and I attack

This action figure doesn't just look great, it's functionality is superb. You press the button on his back and he attacks with the axe in hand. So, it's a definite hit among kids of all ages.

When you're buying Kung Fu action figures for your child, there's no way you could miss out Master Shifu!

Master Shifu is the student of Oogway and the trainer of the Furious Five. He's also the step Father of Tai Lung. Moreover, he's trained Tai Lung to use the Nerve attack which no one else knows.

How could we forget about some of the finest Kung Fu Panda Action Figures - Mater Monkey and Mantis!

These action figures are for kids above the age of 4 and come with movable arms and legs. So, let your child train them to fight the evil forces of Tai Lung!

When we consider Po and the rest of the characters in the Movie Kung Fu Panda, there's no way the Kung Fu Panda action figure set can be complete without your children possessing their mighty weapons!

The Kaboom of Doom Dragon!

As you already know, it's a cannon launcher and this toy allows you to load cannon balls and aim them on targets. Your child only needs to press down the cannon and it fires. The pack includes two cannon balls and two targets. Moreover, when fired the cannon eyes light up and turn red.

If your child loves Po, then you're surely going to enjoy seeing your child play around with these weapons. Some of the weapons Po uses include:

This is a really powerful crossbow, that's the reason the darts are made soft. The firing range of the crossbow is around 20 feet! There are targets that come along with the pack so that your child can have fun playing the game

Glad you liked them Katie :)

Batman Brave and the Bold Toys are a real hit among kids of all ages as there...

On the level where children play, the toys of Skylanders and Lego Friends are...

Batman Brave and the Bold Toys are a real hit among kids of all ages as there are specific toys for them all. So, when buying make sure to check out the age group of the toy....
61%  9   5 kimbesa
Other Kids Toys 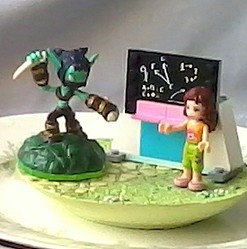 On the level where children play, the toys of Skylanders and Lego Friends are more alike than different. I’m specifically thinking of how young girls like to play.
Loading ...
Error!