The sixteenth issue of Kindle genre magazine KZine mixes comedy with black magic and science fiction with fantasy, and some gangsters thrown in for good measure

The September 2016 (Issue 16) issue of KZine, a science-fiction, fantasy, crime and horror magazine for the Kindle, has a distinctly fantasy feel to it with mind control in “Neighborhood Angel”, black magic in “Nine Corpses, Three by Three” and odd goings on at the office picnic in “Speculum Crede”, plus of course the Christmas ghost story – “Season’s Greetings” – that rounds off the collection. However, the issue starts with a good dose of traditional SF in “A Fire Beneath”, plus there is a interesting mix of comedy and darkness. Published three times a year, it aims to provide original genre fiction for the mobile reader.

“A Fire Beneath” by Derrick Boden

Adria visits her father in prison. She didn’t remember, but she hated him for massacring a peaceful alien civilisation on Titan. However, did things really happen the way the press said they did? Dad says no; she had to find out for herself. A solid, character-driven SF story to open this issue’s proceedings, emotional, told with feeling.

Vincent collects the protection money, but that day he kept having flashbacks to an incident in his childhood. There is a discrepancy. Someone was calling him, and that is how he ended up at the restaurant where the local crime bosses were meeting the Russians who were trying to move in on their territory. A gripping mix of mind control and gangsters, told in the first person and thus leaving the reader never quite sure of the whole story, which is fine.

Myna kills the sheep to read its innards and tell the about-to-be-married couple what they wanted to hear. But when a dead pigeon forecasts nine deaths, was it a prophesy or a warning, or both? Good to see a bit of black magic gracing the pages in this scary little story.

The concept is not new – sending people back in time to correct “errors” that could adversely affect their rulers. That said, Strickland’s band were good at what they did, but there are some events for which nobody can plan. A short tale, with two nice twists at the end.

Richard killed Jack. That we know, but little else in this snippet. Very well written and very deliberately frustrating.

The company picnic was never going to be fun, but for Maria it got worse when her daughter turned into a pea and her son a honeypot. OK, you probably now know this story isn’t taking itself seriously. It is also incredibly weird and entertaining. If you thought the politics in your office were savage, think again.

In a world where VCR stands for virtual consciousness replication and legs are expensive, Kane turns off the virtual Grable to meet the real Julia. But maybe Grable didn’t want to be turned off so Julia could be turned on. An intriguing and amusing glimpse into an odd world.

Steve had been drunk and out of order at the Christmas party, and Jenny wasn’t happy. But in the middle of his booze-enabled sleep, he had a visitor, dressed in red, with a beard, but not so jolly. Will Steve accept his offer? Would you? A touch of dark comedy to finish.

The usual brief biographies of the authors round off the issue. At first glance I thought Dave Windett’s cover was just a starry night sky, but look closer. The magazine was edited by Graeme Hurry.

SteveRogerson, Thank you for practical information, pretty pictures and product lines.
In particular, I noticed Fire Beneath, Kane and Grable, Neighborhood Angel and Stranded. Would Fire Beneath be at all reminiscent of Neverwhere by Neil Gaiman, and would Kane and Grable have anything to do in character or plot with the Bible's Cain and Abel or with the film Kane and Abel?

From a fairy story to an adult tale about a junkie, the fifteenth issue of Ki... 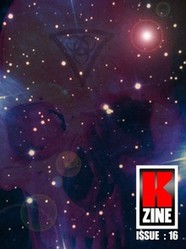 Contenders for the title of best science-fiction novel of all time.
44%  1   6 SteveRogerson
Esoteric Magazines 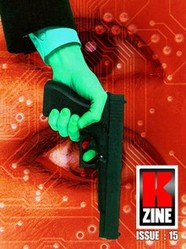 From a fairy story to an adult tale about a junkie, the fifteenth issue of Kindle genre magazine KZine is well worth a read
Loading ...
Error!