A dark selection of fiction forms issue six (May 2013) of KZine, from bedtime chocolates to a reincarnated hamster. There is even a story about Bradford.

KZine issue six features short stories from Nicole Tanquary, Regina Clarke, Diana Doherty, Gef Fox, Michael Siciliano, GA Rozen and JY Saville. The theme seems to be a walk on the dark side of life with evil sorcery, alien invasions, Tarot, reincarnation and a young blonde woman in Bradford. And be careful where you stay next time your car breaks down.

KZine is a science-fiction, fantasy, crime and horror magazine for the Kindle. Published three times a year, it aims to provide original genre fiction for the mobile reader. This issue (Issue Six, May 2013) contains seven stories with a distinct darkness to them. In fact, not much to smile about at all, apart from a little humour in “Self-Aware and Living in Bradford”. The rest should be read when you are alone at your peril.

“A Bedtime Chocolate” by Nicole Tanquary

When the chocolates stopped appearing on her bedside table, she knew her father was dead, but what she discovered afterwards shocked her even more. He didn’t work in a hospital but for a gang of jelly-like grey men who needed him as an anchor for their own battle. Now he’d gone, their thoughts turned to his daughter as a replacement. This is a very dark opener that sets the tone for this issue’s stories. Intriguing, and the ending wraps things up but not nicely, leaving a slightly cheated feeling.

The warden had a mystery to solve: How did a prisoner escape from one of the most secure cells around? And why did she leave her special Tarot deck behind? The questions annoyed the warden because the prisoner had predicted he’d figure it out, and she’d killed his brother. A lovely little puzzle, but it is doubtful that anyone could work it out first.

“The Judgement of the Peacekeeper” by Diana Doherty

Peacekeeper Verity and her familiar knew something was wrong about the village as soon as they entered, but the symptoms – a man without a familiar, a mad wyvern, an over inquisitive hunter – didn’t suggest any single cause. Evil sorcery must be afoot, and the Peacekeper had a job to do. Black magic in a strange world makes for a haunting little tale. Good stuff.

“Requiem for a Rodent” by Gef Fox

What seems like a story about a dead hamster coming back to life turns into something almost as sinister. But then, custody battles are often not clean and when you mix in some taxidermy and bourbon anything can happen.

Jack and Travis are brothers holed up in a shelter discussing their lives as they wait for the enemy to arrive, but not any ordinary foe. This alien invasion story has a sadness similar to many a war story, but the ending hits nevertheless.

“When it’s Ajar” by GA Rozen

Forrest Door B&B seems a welcoming place for cars that break down; the food is good, the bed is comfortable. But this house has a tradition and that is before you leave, if you leave, you have to see the door. This story feels like an episode of the Twilight Zone. It pulls you in, and leaves you there, and you are not quite sure why it is hard to forget.

“Self-Aware and Living in Bradford” by JY Saville

If you see a blonde, nineteen-year-old woman lacking a bit on the intelligence front next time you are in Bradford, it maybe she is really an android from the local university. At first, this seems like a light-hearted end to the stories, but, of course, there had to be a dark twist. Nicely told, and it should bring a smile to your face.

This month’s editorial looks at the difference between the old paper zines and modern e-zines, and talks about how reviews on Amazon have become the most important source of advertising. There are also brief biographies of the authors to finish the zine off.

What would be helpful is if the page locations were listed on the contents page. That way, one could see at a glance the approximate length of each story, helping to decide the order in which to read them depending on time available. A minor gripe, because all-in-all this was an enjoyable selection of stories.

SteveRogerson, Thank you for product lines, pretty pictures and practical information.
In particular, Judgment of the Peacekeeper, Requiem for a Rodent, Self-Aware and Living in Bradford, and When It's Ajar get my attention. Judgment of the Peacekeeper superficially makes me think of Children of the Stones in there being something obviously off about the villagers when visitors show up.

Would it not be an automatic red flag in Self-Aware and Living in Bradford that the blonde is associated with the university but that she's not high on intelligence? 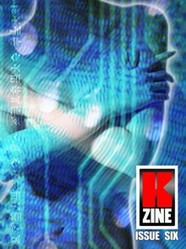