LEDs have advantages over other lighting choices, and can often be adapted to current light fixtures.

An LED light has several advantages over other light bulbs. The result can be translated into two important results, saving the environment and saving money. While saving the environment is by far the greater advantage here, appealing to the monetary saving often will have an impact on convincing a greater number of people that LEDs are a worthwhile idea.

The most important drawback is the initial cost. But, in the long term this is more than offset by the savings realized.

How Does an LED Work?

An LED uses a barrier within it that allows electrons to flow when a high enough voltage is maintained across it.  The semiconductor material has holes where electrons are missing on one side of the barrier, and when the electrons cross the gap they fill the holes.  Of course more holes will soon form, so the semiconductor is never going to “fill up.”  The gap determines the amount of energy needed to cause the electron to traverse it.  That energy possessed by the electron is then given off as light when the electron is captured by a hole.  A specific amount of energy produces a specific color.

The LED light bulb works with one or more LEDs, and each LED can produce a single color.  White light is obtained by combining colors, which is done with multiple LEDs, or with a phosphorescent coating that glows a color that mixes with the LED emitted color to produce white light.

A tungsten light bulb uses a thin tungsten filament that heats up when a current passes through it and causes it to glow.  The problem is that unseen wavelengths are also emitted, with a large amount of energy in the infrared region of the spectrum, a part of the spectrum associated with heat.  Tungsten light bulbs heat up, and can get quite hot.  This heat works against air conditioning, and is passes onto the air, heating the atmosphere.  As part of the process there is a greater need for energy to obtain the same luminosity as one getss using a LED light bulb.

It should be point out that LEDs of a variety of types, including decorative bulbs and spotlight bulbs, make conversion to LEDs more feasible.

Fluorescent bulbs work by an electric field removing electrons from an encased gas.  As the gas captures passing electrons the difference in energy from the free electron to the energy after capture emits a frequency of light associated with that energy difference.  Since electrons that pass by have a wide range of energy, different frequencies are emitted and combine to produce white light.  The problem is some frequencies are not in the visible light range, and while cooler to operate than tungsten light bulbs, fluorescent light bulbs do have some heat associated with them, and some wasted energy.

So, LEDs operate more efficiently, and with less heat, than fluorescent light bulbs.  There is a great savings in energy required for equivalent luminosity, but it is not as great as with the tungsten light bulbs.

Currently, even the long tube fluorescent light bulbs have LED replacements that fit the fixtures.

Wasted energy is made worse because no power plant works at one hundred percent efficiency.  The impact on the environment is greater than the difference in wattage for equivalent luminosity might seem to imply.

Whether it is for an occasional party, or for a seasonal decoration, LED lights are the environmental friendly choice.

The wider market will improve design, and should bring the price point down.

blackspanielgallery, Thank you for the information and the product line. According to the economic law of demand and supply, the greater the purchases of the LED option, the more likely the triple benefit of durability, eco-friendliness and reasonable price. Would it not seem likely that options such as fitting into pre-existing fluorescent light fixtures and offering special occasion lighting, such as parties, would quickly increase purchases and decrease prices? 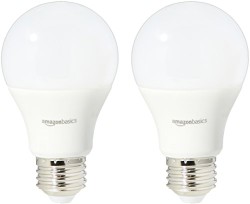 Sweet gum trees are a wonderful shade tree that grows quite tall, but their spiky seed balls are a nuisance, often causing you to slip or twist your ankle.
58%  8   5 frankbeswick
Green Living Tips