The Swamp Creature LEGO Monster Fighter set is based upon the famous monsters from old horror movies and is the smallest set from this LEGO theme.

In 2012 LEGO released its first Monster Fighter sets. The sets in this theme contain great monster LEGO mini figures which are based on famous creatures from movies, literature and legends. The Swamp Creature set is based on the monsters from movies such as the Creature from the Black Lagoon and The Curse of the Swamp Creature.

This Monster Fighter LEGO set contains a really cool Swamp Creature and a monster fighter in a little swamp speeder.

On this page I will feature both the mini figures in this set, take a look at the other items that make up the set and highlight the good and bad aspects.

I hope you enjoy looking at this Swamp Creature Monster Fighter LEGO set - it is a great one for the kids.

This Monster Fighter LEGO set features a really cool Swamp Creature mini figure and a monster fighter armed to the teeth. This little set has a high level of playability and is great for young LEGO fans. Make Frank Rock attempt to grab the moonstone and fight off the attack by the hideous Swamp Creature.

This LEGO set is nicely priced for kids to buy or for a cheap gift and by pitching two enemies against each other, it is a also a very playable little set. Also containing a very nice Swamp Creature mini figure kids and collectors are going to love it. 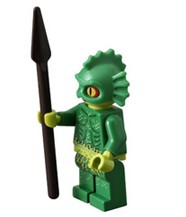 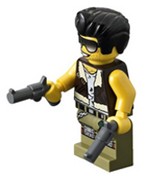 Nothing. Frank Rock is a super cool monster fighter.

The video review below demonstrates all the aspects of the Swamp Creature LEGO set, including close ups of the mini figures and the other parts of the set.

With the dreaded Swamp Creature terrorizing nearby villages the monster fighter, Frank Rock, races in to save the day on his well-armed swamp boat and grab the moonstone from the creature's clutches.

This is an encounter that is finely balanced and the Swamp Creature will not be defeated easily.

Glow In The Dark Moonstone 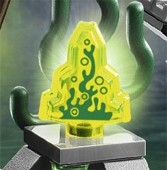 When the lights are switched off a glow-in-the-dark brick, the Moonstone, illuminates, creating a nice, spooky look to this LEGO Monster Fighter set.

All of the sets in this theme have a moonstone piece which are central to the story line running through the theme and in this set it is the only glow in the dark piece.

If you are looking for a small Halloween gift this is perfect and it looks good in a spooky display in the dark. 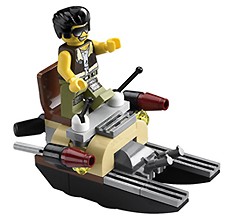 This little swamp boat is a cool little vehicle for the monster hunter, Frank Rock, to use and for LEGO fans to use in chasing the Swamp Creature.

This boat comes in a nice color scheme and is "powered" by a propeller at the back of the vehicle but the thing that will excite the kids is the way that the boat is armed with 2 pistols at the front and two flick-firing missiles on the side. Two control joysticks and yellow lights complete the look of this vehicle.

The swamp boat is a nice addition to this set and increases its playability and will be very popular with young LEGO fans.

This little piece of swamp scenery is created from a collection of grey and green bricks which represent rocks and plants.

A green frog and a fish are a nice addition to the swamp theme but this piece of scenery is too small to be of much interest really and the bricks will probably be better used by LEGO modelers in creating a larger piece of scenery by combining it with bricks from other sets.

How Do You Rate The Swamp Creature Set?

LEGO Battle of Endor Pack 9489
A LEGO battle of Endor will be enhanced by this battle pack which includes two Rebel Troopers and two Imperial Troopers on the forest moon of Endor.
Updated: 05/08/2013, nickupton
Thank you! Would you like to post a comment now?
3 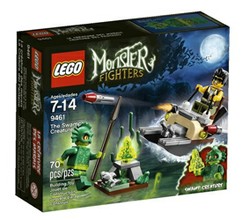 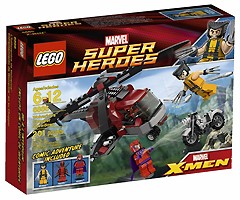 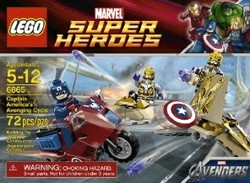