This LEGO Super Hero Captain America's Avenging Cycle set was released in 2012 and is part of the Marvel Super Heroes theme that is bound to be very popular, particularly with young fans. This set is the only one, at the time of release, to contain a Captain America mini figure and the Alien General is also exclusive whilst the Alien soldier is the same as those in other sets. Two cool vehicles and a missile launcher are also included.

On this page I will show you the three mini figures included in this LEGO set whilst pointing out their good and not so good points. I will also feature the other parts of this set and talk about those too. A video review is also included.

I think you will see that this is a really nice little LEGO set that kids will love and it makes a great gift.

Please leave any comments you may have about this Super Hero LEGO set at the end of the page.

This Captain America Marvel Super Hero LEGO set is based upon action from the Avengers movie in which the evil Loki has an alien army as his backup. At the time of release this set is the only one to contain a Captain America mini figure; this may change but considering that it is likely to be redesigned later this set is likely to be the only one with this minifigure. The alien mini figures are very detailed too and each character has either a vehicle or equipment to keep them occupied.

Many collectors will buy this immediately just for the Captain America mini figure but with three mini figures and some cool equipment this is bound to be a very popular set particularly due to its pricing. Young super hero fans will just go mad for this little LEGO set - add it to your list of gifts!

• Comes armed with very stylish shield for throwing at enemies.

• Captain America is left with a LEGO stud on top of his head. 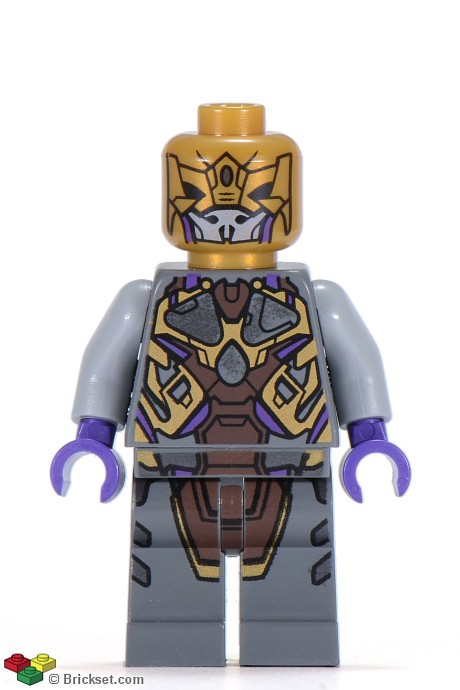 • Highly detailed head printing, front and back; unique to this mini figure.

• Printing on torso and legs is extremely intricate creating a really cool look. Unique printing to this figure.

• Face printing is confusing to look at. 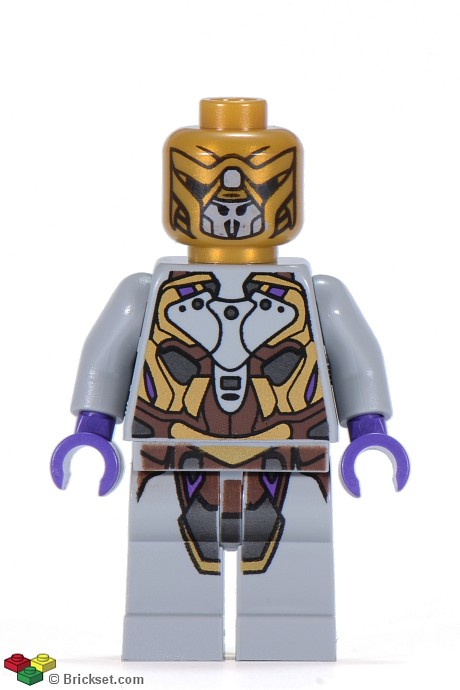 • Highly detailed front and back head printing for alien look.

• Identical to alien soldiers in other sets allowing this figure to slip straight into a larger alien army.

• LEGO stud showing on top of the alien's head.

You can get a close up look at the mini figures and other parts of this Marvel Super Hero LEGO set and hear the opinion of the Brickshow on how good this set is.

An alien raiding party descends to earth and threatens humanity with their flying platform and missiles. No need to worry though as Captain America races into action on his stylish Avenging Cycle to do battle with the aliens and take them out with a throw of his shield. 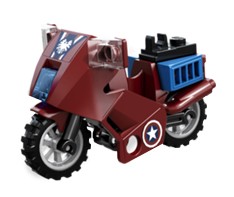 Captain America's Avenging Cycle looks really cool and kids will love its style and color scheme. However, many LEGO fans will not like it as it comprises mostly of one large molded piece which gives the vehicle its shape.

A few stickers are applied to the model to give it the Captain America look but basically this is a customized LEGO City motorcycle.

The cycle has moving wheels, little headlights, a rack at the back in which his shield can fit and cool exhaust pipes at the rear.

Young kids will love this Avenging Cycle for its playability, ease of build and cool look. The Alien General's flyer is actually a pretty cool piece of this set - more interesting than the Avenging Cycle in my opinion.

Made up of two wings and a protective shield for the Alein General to attack from. The color scheme is really nice and there are some cool gold pieces which add style to this vehicle. A small flick-firing missile adds some firepower and a few stickers add further detail.

This is a really nice little vehicle which kids will love using to attack Captain America. 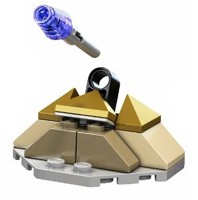 This little piece is a small rocket-launching post for the Alien soldier to operate in battle with Captain America.

Some gold pieces give this quite a nice look but the main feature of it is a single flick-firing missile which will be used to attempt to kill the super hero.

Although this is a very small feature it does add some playability to the set and, again, small kids will love using the missile in their imaginary battles.

Older LEGO fans will like this set primarily for the mini figures, two of which are exclusive to this set at the time of release. The other aspects of the set will be of less interest to older LEGO builders although there are a few nice pieces included.

The younger fans of LEGO are going to love this set and it is relatively inexpensively priced so parents will be happy about it too. The level of playabilty here is high as all three minifigures have something to use in their battles and with two fast-moving vehicles kids will be playing with this set for ages.

Lego T Rex
Dino LEGO T Rex Hunter is a cool Lego set released in 2012 which will excite those boys who love dinosaurs as well as constructing Lego vehicles.

Dinosaur Lego is available here! Toys for boys don't get much better than thi...

A total of twelve mini figures come with this Battle of Naboo Star Wars LEGO ... 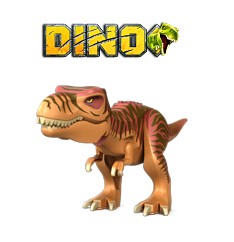 Dinosaur Lego is available here! Toys for boys don't get much better than this; the fun of building LEGO models and cool minifigures is combined with the excitement of dinosaurs.
14%  0   2 nickupton
Lego 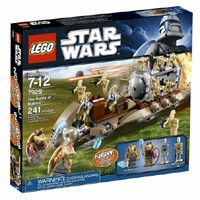 A total of twelve mini figures come with this Battle of Naboo Star Wars LEGO 7929 set; 2 superb redesigned Gungans and a force of Battle Droids along with their deployment vehicle.
Loading ...
Error!