Leiden, university town in The Netherlands

Leiden is one of the oldest towns in the Netherland. I'll show you a bit of the history of Leiden, some pictures of the sights and a view into the local culture. Do take a look at the statistics so you know what kind of town we're talking about here.

The old town is the prettiest part of Leiden (isn't it always?), but I've included pictures of the less picturesque, just so you'll get a complete view.

I live in Leiden, the town this lens is about. I've also listed Amsterdam, because most people know that city exists, and Groningen, because that's where I lived most of my life.

One of the oldest cities in Europe

1575 - It got its university, the first in The Netherlands.

17th century - After Amsterdam Leiden was the largest city in 'De Lage Landen' (The low countries, roughly what's now called 'The Netherlands) mainly due to its textile-industry.

Close to the centre - favorite place to study in the shade

There are some lovely parks in Leiden.

One of the oldest universities in Europe

Founded on February 8th 1575. Leiden University is the oldest university in The Netherlands and became internationally prominent in the 19th and 20th centuries. Nobel Prizewinners who worked at Leiden include: Heike Kamerlingh Onnes, Pieter Zeeman, Hendrik Lorentz and Willem Einthoven.

Other famous scientists who worked at Leiden are:

Leiden University is pretty famous abroad, but within the Netherlands it is usually seen as just another university. The general universities in The Netherlands (Utrecht, Groningen, Amsterdam, Leiden) are all funded in the same way: by the government. Enrollment is based on the same criteria.

For some subjects Leiden really is the best (or the only) option. For instance the Leiden language department has courses on languages like Sanskrit, Indo-European Languages, Tamil and more. These languages can't be studied anywhere else in The Netherlands. But Utrecht has a Celtic languages program that's doing quite well and is unique world wide.

I'm studying world religion myself, and I do feel that Leiden program is the best: very balanced and it offers quite decent specialty options.

Still, if one is interested in studying medicine, Dutch law, European law, math, physics or psychology (to name just a few important subjects) - Leiden may not be the best choice. These subjects are taught in many Dutch universities. The way the subjects are taught can differ a lot, and Leiden does not have a reputation for having the best teachers, though personally I've had some great teachers.

All in all, if you are considering studying in The Netherlands, you may want to look beyond Leiden. Whether Leiden is the best choice really depends more on the subject you want to study than on its historic reputation.

There are about 117.000 inhabitants. 56% of these are not married, which is probably due to the large percentage of students at the university. Only 7% of the inhabitants are divorced.

I was in Leiden about 12 years ago and I fell in love with the city. It's really beautiful and so interesting. I love the way the river runs through the city. - Claire

Poems in many languages

Leiden has a unique project of putting poetry on the walls of its buildings. Click on the images to see the text of the poems in their original language, English and Dutch.

During the 80-year war with Spain (which was a war of independence), the City of Leiden was attacked by the Spanish from 1573 through 1575. In opposing the Spanish, the city effectively endorsed the struggle for independence.

After the liberation of the town on Oktober 3rd 1575, the city was rewarded for its stance against the Spanish - with a university gifted by Willem of Orange.

Oktober 3rd has been a local holiday ever since.

Leiden on the map

The Pilgrims - a touch of American History

It's a little known fact that the famous 'Pilgrims' lived in Leiden (and Amsterdam) for a while. The Pilgrims escaped England because of religious persecution. They boarded a Dutch ship in 1608 and landed in the Low Country.

Some of them stayed in Amsterdam, and others went to live in the second largest city of the time: Leiden.

From 1620 on some of these immigrants moved on to America to escape the war with Spain which was coming on again after 12 years of cease fire. The famous boats they went on were the Mayflower (1620), Fortune (1621), Anne and Little James (1623) and the second Mayflower (1629).

In all the old towns of the Netherlands there are places we call 'hofjes'. These were cheap and small living arrangements for individuals of small means. Usually the church had paid for their construction. The small houses were built around a garden or 'hof'. Picturesque and quaint these hofjes are among the cutest of places to see in any old Dutch town or city.

Leiden has 35 hofjes still. These are usually open to the public in a limited sense. That is: one can't visit the houses themselves, since there will be people living there (at the center of town these are coveted places to live, even if a bit small by today's standards). But the garden and any communal places left are often open.

More about hofjes in the Netherlands

More about The Netherlands

Little known facts about The Netherlands
Learn about working women in The Netherlands, our royalty, or relationship with water, some history and a lot more.

Bikes in The Netherlands, about Dutch Bikes

There is no country in the world where biking is so normal as it is in The Ne...

Little known facts about The Netherlands

Learn about working women in The Netherlands, our royalty, or relationship wi... 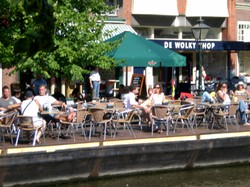 Bikes in The Netherlands, about Dutch Bikes

There is no country in the world where biking is so normal as it is in The Netherlands - except China. This is a tribute to Dutch Bikes.
13%  0   2 spirituality
Netherlands 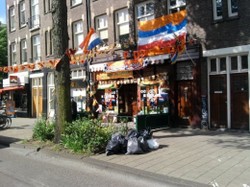 Little known facts about The Netherlands

Learn about working women in The Netherlands, our royalty, or relationship with water, some history and a lot more.
Loading ...
Error!