Nestled in the stunning Cheshire countryside, Little Moreton Hall shouldn't still be standing. It should have fallen down hundreds of years ago; but it hasn't.

ENGINEER'S QUOTE " Logically, it shouldn't still be standing up ! "

This beauty is advertised as a house" that has defied logic for 500 years". It has been called a " stranded Noah's Ark " a " masterpiece " " the original crooked house " So what is it all about ?

Little Moreton Hall is a moated half-timbered manor house in Cheshire, England built for wealthy Cheshire landowner William Moreton in about 1504–08. It was built without any foundations and shouldn't be standing up plus, the addition of a long walking gallery on top should have toppled it over. But it hasn't; it is still standing. It is built around a central courtyard and has a wicket door, a small door inside the main door.

The weight of the Long Gallery has made it crooked.

Engineers started to work on keeping Little Moreton Hall standing in 1990, nearly 500 years after it had been built without foundations. The lack of foundations accounts for its crooked appearance and it is a well known picture on jigsaws, calendars, chocolate tins and biscuit tins.

I think it is just gorgeous.

Little Moreton Hall was the home of a Norman family and successive descendants. It is first mentioned in the 13th C but the present house is early 16th C.The Long gallery is believed to be haunted by a grey lady and there are several stories of hauntings.

Inside the courtyard it is very clear to see that the carpenter has conveniently carved his name Richard Dale into the wood at the time of building.  The Dale family were associated with Little Moreton for centuries. His name is carved on the centre piece of wood above the people's heads.

The quintessentially English idea of a house is the black and white house although most didn't start as black and white but the creamy / yellow colour was often painted over many houses with white in 18th and 19th centuries.

See how delightfully crooked Little Moreton Hall, Cheshire is. That is because of the Long Gallery at the top.

The Cheshire wattle and daub houses were always more adorned and ornate and showy in Cheshire than other parts of England . Ha Things don't change much there!

The main way in is over the original moat which was a way of securing the house from attack. This leads into the inner courtyard. The black and white is continued into the courtyard and take a look at the spiral staircase on the right inside the house. To the right of this shot is the chapel which is really beautiful inside.

At the back of the house there is a very symmetrical, well maintained,  little garden called The Knot garden. I don't know why it has that name.

Little Moreton is opening for a Tudor Christmas again this year. It is a magnificent occasion.

The Victorian era saw the emergence of the middle class in England. These people wanted to be upper class but didn't know how so they devised a set of rules and norms to live by thinking they were copying the upper classes by so doing. These rules became accepted though.

It was felt that white was more proper. The new middle classes were falsely prim and proper people on the surface. So everything started to be changed.

Veronica, Thank you for sharing Little Moreton Hall, whose existence proves the saying that Nature-like beauty abhors a straight line! Why did original cream and yellow colors get replaced by white, which shows wear-and-tear more easily?

Little Moreton is opening again for a Tudor Christmas year.

The link is here.

Little Moreton Hall is opening its doors for a Yuletide Christmas in the house.

This one was recreated during the renovations . It is beautifully accurate.

It underwent HUGE structural support work in the 1990's, I THINK underpinning the Long Gallery and also the house, as it has no foundations. It is owned by the National Trust, a very prestigious UK charity trust and the work was done to the highest standards possible whilst maintaining the integrity of the history. Despite the structural work, the crookedness remains ; but doesn't get any worse.

It can't move anywhere now ! after all that structural support work. So it is not a danger to visit. UK standards wouldn't allow it . I visit regularly as I am member of the National Trust and make the most of my membership.

Is it in any falling danger? If so, how is it allowed to remain pen to people? Apparently it has long ago stopped shifting, or the distortions would break windows and rebder doors useless. The fact these are even there indicates the structure must no longer shift.

The floor is more than slightly crooked, you couldn't play indoor bowls in there. I would just urge everyone to visit Little Moreton if at all possible. The air is clean and crisp, the atmosphere soothing and there are always a variety of history activities.

Hello yes, it is very beautiful inside and the tea shop is actually inside the building. The shape of those windows is what does it for me, every time. I wonder in awe at the craftsmanship of those men who had none of the modern implements to help them and yet they produced such magnificence with basic tools and their own careful eye.

A limn is a description in words and pictures and so what better word to use ...

Although not as well known or as filling as Lancashire recipes, Cheshire traditional food is just as good. Cheshire was originally an inland salt lake and the soil is salty.
81%  17   6 Veronica
Travel & Places 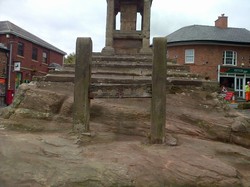 A limn is a description in words and pictures and so what better word to use in a post about the beautiful village of Lymm in Cheshire than a "limn about Lymm."
Loading ...
Error!