Why does every doll I collect become obsolete? Hasbro has dumped these diminutive dolly darlings with big eyes and big personalities.

Littlest Pet Shop Blythe dolls are the smallest incarnation of the popular 1972 Blythe Big Eyed doll made by Kenner. At about 4 inches tall they are the only Blythe Dolls currently on the market that are acutally "play" dolls. The average price is around $10 each so they are affordable enough for little girls to enjoy. But there are many "big" girls (and guys) that love Littlest Pet Shop Blythe too.

There is now another Blythe Doll Hasbro creation to accompany the Littlest Pet Shop toy line, but she's hard plastic and nothing like the charming cuties that have captured the hearts of Blythe collectors.

Who Is Littlest Pet Shop Blythe From Hasbro Toys?

The Hasbro Littlest Pet Shop Blythe dolls were created by Hasbro to go with the wildly popular Littlest Pet Shop animal toys. In her story line Blythe Baxter recently moved into an apartment above a pet day care shop and discovered her unique ability to understand and talk to the animals there.  She becomes their "Pet Sitter" and the accessories included with the dolls are tied into the theme.

The Littlest Pet Shop cartoon series aried on Saturday Morning Cartoons in 1995 without a Blythe character, and in 2012 was revived in another television series with the same name.   The current cartoon is centered around Blythe the pet sitter, and her amazing ability to converse with the animals.

LPS Blythe Loves To Play In The Sun And The Snow

Look At Those Tiny Ice Skates - They Come Off!

A History Of Blythe - From 1972 Kenner To Now
Follow along and learn how this obscure and overlooked doll from the '70s became one of the most coveted and valuable dolls ever.

Amazon Is A Safe Convenient Place To Shop

The dolls are small at just 4" tall, and are made of vinyl.  They have rooted hair and eyelashes, and the facial details are painted on.  Her eyes are inset glass, but they don't close.  LPS Blythe is marginally poseable with joints at the shoulders and hips and her head swivels around.

Most of the dolls are packaged in sets with an outfit, comb, an adorable pet, and some accessories.  There were a few versions without the pet, and some that were produced as exclusives for Target.  After the 47th incarnation of tiny Blythe, her look changed and her lashes were painted on.  There is a current version of the Blythe doll from Hasbro that is solid plastic with snap on clothes, and looks more like the newest TV series character.  She has not been received graciously by collectors.

At my last count there were over 50 Littlest Pet Shop Blythe Dolls produced by Hasbro since 2010. I have 10 of them.  That means I need around 40 to complete the entire set.  Arrrgh!  Now that the Blythe doll body has changed to resemble a Polly Pocket style toy, I expect the prices of these cute collectibles with hair you can brush and clothes made of fabric to go up.

I've seen a few of the doll sets at closeout stores like Tuesday Morning and Ross, but eventually they will only be available on secondary markets aka eBay and Amazon.  That's where enterprising individuals (like me) will be selling LPS Blythe dolls at a premium. How I wish I had bought them when they were in Target and Toys r Us at regular prices.

eBay Is Another Place To Shop For Discontinued Blythe Dolls

Littlest Pet Shop Pinterest
What are the most popular LPS Blythe pins?

Any LPS Blythe Sightings? Please Comment Here And Help Me Complete My Collection

I think they are cute too. Possibly because they don't look the same as Blythe in the newest version of the cartoon series.

Oh NO they are so cute and adorable dolls, sorry to hear about it. It's just another case in point making doll collectors wonder what the companies motive is....

I agree AnomalousArtist. Maybe she had become less profitable who knows.

My friend dotes on Blythe and feels the same way...it really does seem like these toy companies do this arbitrarily...it's almost like the motto in Hollywood with movies: "Keep doing it until you get it WRONG." :(

I'll keep my eyes our for them. I liked Daisy best!

I've got my eyes peeled in every store. Thanks kimbesa.

Noooo.... I'll have to look around next time I'm out. They were growing on me!

My Kenner Blythe, Peteena the Poodle in a Bikini, and Emerald the Enchanting ...

I finally went to see the new Disney movie Oz The Great And Powerful this wee... 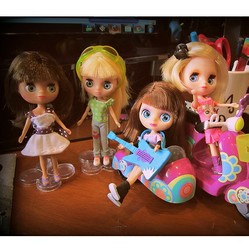 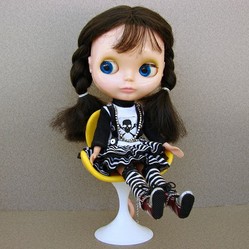 My Kenner Blythe, Peteena the Poodle in a Bikini, and Emerald the Enchanting Witch dolls were just 40 years or so ahead of their time.
57%  7   5 fitzcharming
Character Dolls 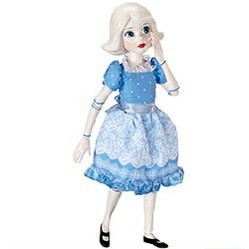 I finally went to see the new Disney movie Oz The Great And Powerful this weekend because I needed the story behind my new dolls.
Loading ...
Error!