Tadoba Tiger Reserve is a habitat of predators. With the high visibility of wild tigers, the reserve has shot to fame. The refuge offers sighting of many animals and birds.

Situated in the Indian State of Maharashtra, Tadoba is also known as Tadoba Andhari Tiger Reserve (TATR). Andhari River flows through the National Park acting as a crucial lifeline of the ecosystem. The lake is the most picturesque element of the ecosystem and supports many species of birds, fishes, turtles, and the marsh crocodile.

The dense foliage and rugged topography is ideal for adventure in the wild. The amazing biodiversity has given birth to myriads' life form of which the tiger is the topmost (food chain).

The vast road networks cover most of the habitats of the Carnivora and thus offer an excellent chance of an encounter. The rivers, water bodies, hills, and grasslands are all ingredients for a fantastic panorama. 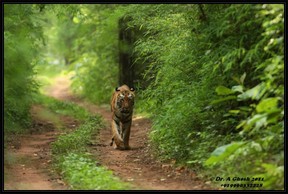 The erstwhile princely state forests have suddenly come into the limelight. Tadoba has become the best place in India to see the tiger in its natural habitat.

Situated in Chandrapur District in Central India near Nagpur City it is easily accessible by road.

The destination is part of Central Indian Highlands so aptly described by James Forsyth in his book with the same name.

Chandrapur was the seat of the Gond tribe in Central India during ancient times. The Fort at Chandrapur is a testimony to their rule.

The park is the largest in Maharashtra and the oldest. It is a conservation unit with a primary focus on the Bengal Tiger. The population is nearing ninety in the total area of 1727 sq. km. There are fifty-eight tigers in the adjoining forest.

Tadoba thus offers a great probability of sighting these mighty predators. Others animals that are frequently seen are the leopard, sloth bear, wild dog, bison, sambar, and spotted deer. The animal commonly seen are the jackal, langur, wild boar, deer, and rhesus macaque. 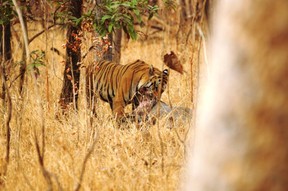 The park is divided into nine zones of which three are in the buffer. The rest are in the core zone or the critical tiger habitat.

Like other parks, an entry permit is required for excursions here. The jeeps are available for hire near the gates. All the safari bookings can be done by the hotel you are putting up at. It is advisable to book permits in advance at least two months before or more.

A zone is allotted during the bookings. You can roam around in the prescribed zone not elsewhere. A forest guide accompanies the jeep - which is mandatory. At Tadoba TR you have a good chance of sighting tigers and leopards. This is one of the reserves where the two predators can be sighted both inside and outside the park namely the buffer zone. This is why tourists flock to see them here.

The tigers and leopards are often encountered while on activity. This makes the romance of sightings memorable and lasts one's lifetime. 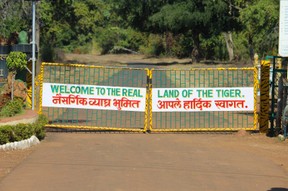 The tourism infrastructure at TATR is well equipped to handle a large number of tourists. The connectivity via Nagpur is excellent and most tourists arrive via this city with railhead and airport.

Tourism takes place throughout the year and hence more people visit this park, some arrive even during the monsoon. All arrive here to see the tigers of Tadoba in the enchanting wilderness. Many arrive here for bird watching, some visit for relaxation and enjoying the resort facilities.

There are temples and monuments nearby which can be visited after the tour is over.

For accommodation, many hotels are here and more are being established. The accommodations range from budget to luxury categories.  The entry to Tadoba Tiger Reserve is widespread hence one must try to stay at the nearest hotel. those planning to arrive during holiday seasons should have carried out all reservations in advance.

While booking a hotel make sure you are near the gate from which you plan to enter for safari. Have a look at your permit before you decide to book?

Safari in the rains are organized in motorable area which has no or less slush. These areas are in the buffer... core or main area of the park remains closed during the monsoon. Tourists visit in this season to experience the forest and wildlife in the downpour, or under the clouded sky. The landscape under shadows of clouds appears fascinating and the cool breeze are enticing. Many tourists come here for recreation in the resorts since wildlife is illusive in rains.

In monsoon the torrents could be dangerous and lightening accompanies. People come out or drive whence the torrent stops. It is a unique experience for the adventurous. Please note as the rain clouds accumulate, it could become humid beyond tolerance. It cools down whence sufficient rains arrive. It does not rain on all days.

pateluday, Thank you for practical information, pretty pictures and product lines.
You mention under the heading Factfile Tadoba that "The tourism takes place throughout the year and hence more people visit this park, some arrive even during the monsoon." Would there be days without downpours or would the park activities unfurl -- and would the wildlife be observable -- regardless of the amount of rain? 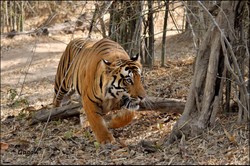