In the lead up to the Nottingham Beer Festival in October 2013, the local branch of the Campaign for Real Ale challenged its members to come up with some new beers with the help of three local microbreweries. Steve Rogerson was a member of the team at the Magpie Brewery and gives his account of the experience.

Though I love drinking beer, especially real ales and craft beers, I had never actually had a go at brewing a beer. Well, earlier this year that opportunity presented itself to me in a rather unusual way.

The Nottingham branch of the Campaign for Real Ale (Camra) decided as part of its diversity programme to let some of its members come up with their own beer. Three local microbreweries agreed to take part in the experiment and calls for volunteers were issued. I put my hand up and was picked to be on one of the three teams. I was allocated to Magpie Brewery, which sits in a small industrial estate in the shadows of Notts County’s football ground; Notts County’s nickname is the Magpies, hence the brewery name.

This was handy for me as the brewery is only a fifteen to twenty minutes walk from where I live. The goal for all three teams was to produce a unique beer that would then go on sale at Nottingham’s annual beer festival in October where visitors would vote on which they liked the best.

So that the brewery would be ready for us on the actual day, some preparation work was needed and Katrina Mitchinson, our contact at Magpie, emailed all the people on the Magpie team to ask about the type of beer we would like.

I was keen to avoid the light citrussy beers that have become very popular. I have nothing against those beers, and drink them often myself, but felt that we should buck the trend a little and go for something darker, more solid and traditional.

It was thus pleasant to discover that the other members of the team felt similarly and thus we had a plan – a nut brown, traditional ale at just under 5% abv.

And so, early on a Monday morning in mid-September 2013, the team gathered at Magpie Brewery for a day of brewing. The professional brewers had already done some of the hard work in coming up with a suggested malt mix to give us the colour and strength that we were after. The goal was to make a full brew of 21 casks that would not only sell at the beer festival but in some of Magpie’s other outlets.

The suggested malt mix that we went with and helped add to the brewing vessels comprised 135kg of Maris Otter malt, some 20kg of crystal malt to add sweetness and a small 1.6kg of chocolate malt, which gives much of the darkness. Given how little was added, I was surprised at how noticeable the chocolate flavour was in the final beer.

While that was brewing, we were asked to pick our hops and had a few beer tasters to get a feeling about how they worked. As mentioned, we were keen to avoid citrus notes but also wanted something a little different and so we went for some of this year’s experimental hops. We used a mix of three hops, added at different points in the brewing process to influence the smell and the taste, starting with Phoenix in the copper, followed by Bishop and Crusader later in the brewing process. Nottingham yeast was used, as it is in most beers from this brewery.

Hops added, it was time to sit down and come up with a name, and various bird-like suggestions were tossed around until someone suggested Gulp. Gulp is a collective noun for magpies, it suggests drinking and is easy to remember. So Gulp it was.

The brewery also wanted to make a single cask of an experimental beer to sell at the festival based on the same malt mix as the Gulp, but with different hops. Here we opened up with Challenger hops, but went for two lots of 40g of Baron hops for the later stages. We also used a Belgian yeast.

We did consider calling it Double Baron as a result, but in the end went for Diversity 40-40.

The proof of the pudding

Rather nervously, a week before the festival we gathered once again at the brewery to taste what we had brewed. The Gulp was, as expected, a lovely dark colour with an earthy bitterness and that chocolate under-flavour. It received thumbs ups all round.

The Diversity 40-40 was a bit different. The Belgian yeast gave it a very distinct taste and, while OK, not something we’d particularly like to drink a lot off. It was also very lively in that the bottled version tended to create a bit of a fountain when opened. This continued. I bought a couple of bottles and let them settle for a few weeks and they still gushed when opened. The Gulp on the other hand stayed lovely in the bottles, in fact improving slightly as it carried on conditioning.

The festival and the competition

The beer festival itself gave us the first opportunity to try the beers from the other two teams. Both had gone down the light citrussy route that we avoided. The hope was that this might split the citrus vote.

The Merry Mayhem from Lincoln Green Brewery was very hoppy and not something I personally would drink a lot of but I know this kind of beer was very popular and so would provide strong competition.

Sadly, the Dogversity beer from White Dog Brewery came up very hazy at the festival and thus we were obviously not seeing it at its best, but it too was a light citrussy beer.

Later in October, we all gathered at the Falcon Inn at Canning Circus in Nottingham for the result. This is Lincoln Green’s first pub and all three beers were there on draught. I actually thought both the competing beers tasted better here than they had at the festival, and the Dogversity was no longer hazy.

I suspect it was that cloudiness that led to it finishing third of the two beers and so it was between Gulp and Merry Mayhem. Sadly for us, the light hoppy beer won the day and we had to settle for second place. Congratulations to Lincoln Green and I toasted their victory with a glass of Gulp.

SteveRogerson, Thank you for practical information, pretty pictures and product lines.
Are first, second and third places like the Olympics in that in a way it doesn't matter where one places since all three will be remembered, or do all advantages accrue only to first place?

So is it not possible to purchase Gulp anywhere? If not, would there be some kind of archive on the Magpie Brewery premises where Gulp would be stored in sufficient numbers so that it won't be forgotten?

A look at how the Cask Marque organisation helps ensure a good pint of beer a...

How To Brew: Everything You Need to Know to Brew Great Beer Ev...
43%  1   6 SteveRogerson
United Kingdom of Great Britain and Northern Ireland

The Carrington suburb of Nottingham, England, has five very different pubs in which drinkers can try some very nice real ales.
30%  1   4 SteveRogerson
Ales 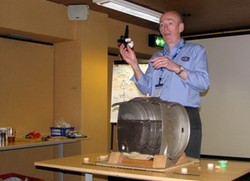 A look at how the Cask Marque organisation helps ensure a good pint of beer and a personal account of a Cask Marque training day.
Loading ...
Error!