Medjugorje is one of the most famous Roman Catholic shrines in the world. It became known through the apparitions of the Virgin Mary, which had started in 1981.

Six young people from Medjugorje (Ivanka Ivankovic, Mirjana Dragicevic, Vicka Ivankovic, Ivan Dragicevic, Ivan Ivankovic and Milka Pavlovic) saw a white female apparition with a child in her arms on the hill called Crnica, on the area called Podbrdo (the Apparition Hill). It was June 24th, 1981. They were too afraid to come anywhere near her, but they came back in the same time the next day, joined by Marija Pavlovic and Jakov Colo. They recognized this apparition as the Virgin Mary, so they talked and prayed with her. Apparitional experiences and Medjugorje messages started from that day on, but unfortunately Milka Pavlovic and Ivan Ivankovic did not see the Virgin Mary ever again.

During Roman times, this area belonged to Narona district. Some remains of late antique basilica were found in Medjugorje. Medjugorje is first mentioned as an autonomous parish in some historical document in 1599. The present parish was founded in 1892 and it was consecrated to Saint James, the patron of pilgrims. The present church was completed in 1969 ant it was also consecrated to Saint James. The first church was built in 1897, but it was not used after the First World War. In 1993, cross was built at the top of the hill called Krizevac because of 1900th anniversary of Jesus Christ. There is an inscription on the cross that says: “To Jesus Christ, The Redeemer of Man, as the sign of our faith, love and hope, in memory of 1900th anniversary Jesus Christ’s death". After June 24th, 1981, the first apparition of Our Lady and Medjugorje messages, the history of Medjugorje is somewhat different. Since then, Medjugorje began to develop rapidly providing all necessary facilities to pilgrims during their visit to the world’s famous shrine. Since the apparitions and Medjugorje messages have started, this little Herzegovinian place is one of the most visited tourist centers in Bosnia and Herzegovina and it is visited by million Catholics from around the world annually. Nevertheless, the Medjugorje shrine has still retained its original charm, in which pilgrims find peace in religion. Religious meetings are usually held in Saint James Church.

The Miracle of Medjugorje

Have you ever been to Medjugorje?

Travel to Sarajevo: Where History and Modern Age Meet

Learn about rich culture and history of Sarajevo and hear the reasons to trav... 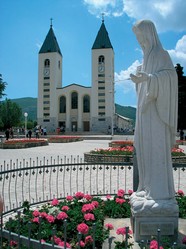 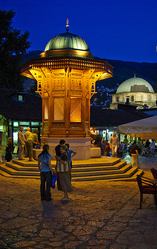 Travel to Sarajevo: Where History and Modern Age Meet

Learn about rich culture and history of Sarajevo and hear the reasons to travel to this cultural capital of Balkans.
100%  23   10 sockii
Italy

Visiting Italy is a dream of many...but is it too expensive to turn into a reality? Not necessary. Read on for my tips to enjoying an Italian vacation on a budget.
Loading ...
Error!