Microtonal music: a definition, and examples of different tuning systems and approaches to microtonal composition and performance.

The experience of music is often compared to the perception of colors. What would it be like to see a completely new color, one you had never seen before? We may never get to experience this, but in the realm of music, we can experience something similar: musical intervals and scales that are completely new to us and outside our normal experience. These intervals fall under what is called microtonalism.

Microtonal music is usually defined as any form of music which uses intervals smaller than the typical 12-step chromatic scale used in most modern Western music.

Microtonal music includes quarter tones and other equally tempered tuning systems, but it also includes other approaches to tuning and composition which are based on small intervals, including compositions using just intonation (exact matches to natural harmonics).

Have you heard of microtonalism before?

Did you ever have the opportunity to hear or listen to microtonal music before?

The Dominance of the 12 Tone System

We often take for granted the musical system that is most common in our society.

In our society, the Western musical system has become so dominant that it is often taken for granted.  The keys on the piano, the frets on a guitar, the holes and keys on woodwind instruments are all spaced certain distances apart to give exactly 12 notes per octave.

These intervals are even hard-coded into most computer software.  A lot of computer software, including MIDI and various synthesizers, are not easily capable of producing music at any pitch--they require complex manipulations and pitch-bending to produce sounds of different intervals.

Non-Western music does not always fit neatly into the 12 tone system that is the dominant one in our society.  Indian classical music, and the scales of Arab music, cannot be played within this system, because they have notes, scales, and musical intervals that cannot be meaningfully approximated in the 12 tone system without the essential character of the music being lost.

Typically, Arab music is played using quarter-tones, dividing the 12-tone system in half, effectively making it a 24-tone system.  Arab music uses the Oud, a guitar-like instrument without frets; because it is fretless, a musician can play any note, including the notes that don't fit into the frets on a Western guitar.

Nearby, the music of Byzantine chant uses an even more complex system, with intervals that don't even fit into a 24-tone division of the octave, including even finer divisions to be accurately represented.

The Sitar, used in Indian classical music, has adjustable frets that can be tuned to play different scales.  Each song will typically use a different set of notes with different intervals, many of which do not correspond neatly to the familiar intervals of Western music.  Indian classical music is a little trickier to approximate with any equal temperament.  For a full explanation I recommend Indian Classical Music: Tuning and Ragas, by Catherine Schmidt-Jones.

Most East Asian music centers around pentatonic scales, which can be well-represented in a 12 tone system.  But there are many caveats; some scales in Japanese traditional music include notes corresponding to the 7th harmonic, which cannot be accurately captured with a 12 tone scale.

Some Microtonal Intervals Used in Scales

Microtonal intervals do not need to be smaller than a half-step!

In Western music, the building blocks of the scale are the whole step and half step.  Microtonal music though can have any number of other stepwise intervals.

Some that occur in various traditional musics include:

As you see, microtonal intervals do not need to be smaller than a half step.  When people think of microtonal music, they often think of quarter tones, which are half the size of a normal half step.  But microtonal music usually does not use such tiny intervals musically--instead it uses intervals within the typical range of sizes found in normal scales, but a little narrower or a little wider than what we are used to.

There is no one-size fits all solution. Many systems of notation are ugly and unwieldly.

There is no single way to notate microtonal music.  Pictured above is a method, using semi-sharps and semi-flats, that can work well for some systems, including quarter tones and 31 tone equal temperament.  These two tunings are among the easiest of microtonal tunings to notate.

This method does not work for systems that distinguish between whole steps of different size, or that have more than 6 steps in between the two notes of a whole step.  Examples would be 22, 34, or 53 tone equal temperament.

Can you read standard music notation?

This poll helps me know what sort of audience I'm reaching.

Most Western music uses equal temperament, an equal division of the octave, for practical reasons.  Although equal temperament doesn't provide an exact match to the natural intervals, for certain numbers of divisions, the match is so close that it is hard to notice anything being off.

An overwhelming majority of Western classical, jazz, and pop music uses 12 tone equal temperament.  Any division of the octave into more than 12 equal steps (i.e. each step is smaller) is considered microtonal.  Here are some of the most notable microtonal equal temperaments:

Why these numbers?  It seems a bit random, but these numbers are actually a result of deep mathematical truths.  Why does it turn out that way?  I don't really know, but it just does.

Improvisations on a 22-Tone Guitar

After fiddling with numerous microtonal tunings I came to like 31-ET best of all.  I wrote an essay: Why 31 Tone Equal Temperament?  A quick summary:

Want to be convinced?  Listen for yourself!

Adriaan Fokker built an organ in this tuning, which is my favorite microtonal tuning.

Smaller intervals can be used to fine-tune music to closer match natural harmonics.

Microtonal music does not need to sound alien or bizarre.  The fine-tuned intervals of microtonal music, instead of being used to play new and alien sounding intervals, can also be used to provide closer matches to the natural harmonics.

This results in music that has a clean and pure sound, sounding much more in-tune than music played in the 12-tone system we are used to.  This effect is particularly clear when listening to high-pitched instruments with a clear sound, like a flute.

A performance of Bach's work; some discussion in Dutch at the beginning of the video

Which use of microtonal tuning appeals more to you?

Microtonalism can be used to create a genuinely new and different sound, or to make existing music sound more natural and in-tune.

More of My Pages

RateTea: Rate and Review Teas
RateTea is a social and community website where anyone can rate and review teas.

Why This Way - A Consensus-based Belief System and Organization
Why This Way is a consensus-based organization and belief system which may or may not be a religion, depending on your definition of religion.
Updated: 10/24/2013, cazort
Thank you! Would you like to post a comment now?
3 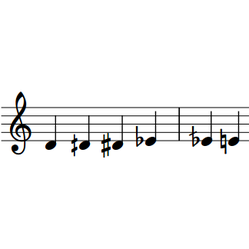 Why This Way is a consensus-based organization and belief system which may or may not be a religion, depending on your definition of religion.
45%  5   4 cazort
Web Startups